If you are in a Pig Rat relationship, you ought to be happy with the knowledge that this could be the perfect affair that you might have been longing for. Pig Rat compatibility makes up for a great match. Whether these two individuals choose to be in a business relationship or in a relationship where they are more than just friends, they would work in harmony. Yes, there would be issues in this match, but these problems might not be overwhelming for Pig Rat in love to get through.

The pig lover is an individual that believes in honesty. It is for this reason that most of the relationships they are involved in normally flourish with minimal hiccups. When it comes down to making important decisions in life, this is a lover worth admiring. They take their time to ensure that they settle for the best decision. Truly, this gives them an upper hand over other impulsive lovers in the Chinese compatibility zodiac chart. Well, in some cases, they would be at a disadvantage since there are those opportunities that they would be missing due to their critical thinking process.

The rat lover is a social animal. They would live and thrive with a circle of friends that they trust. One of the most admirable aspects of the rat is that they are hardworking. In addition to this, just like the pig, they would keep their family matters first. In terms of finances, you can rest assured that the rat would not let you down. This implies that Pig Rat friendship would be living a comfortable life free from any financial issues.

So, what do you think about the Pig Rat love compatibility pairing? Do you think that this love affair would stand the test of time? Take a look at the pros and cons of this love match before making any judgements.

Pig dating Rat for the first time would be a very unique experience. The pig lover is a person that would be admired for their beauty and charms. They know how to dress considering the fact that they could be regarded as over spenders. Assuming that the pig lover is the woman in Pig Rat love compatibility match, rest assured that the rat would not manage to resist this beauty. The pig lover would also be impressed by the verbal eloquence of the rat lover. They are good with words. They would use this to their advantage and ensure that they earn themselves the treasure that would be lingering ahead of them.

With regards to their social natures, Pig and Rat compatibility will be great. From the rat’s perspective, socializing with people out there is easy for them. This happens because they attract more people to their end due to their wit and charms. Their talkative aspect astounds many and thus they would have a large circle of friends. On the other hand, the pig lover is no different. They are not verbally eloquent but they are easygoing when it comes to communicating with other people. The pig animal sign have a way of ensuring that those around them feel comfortable. This is what they would be doing to earn the trust of the rat and some of their friends.

Concerning commitment, Pig Rat love compatibility would also stand the chance of thriving. This couple understands why family is important to both of them. This implies that Pig Rat in bed would be ready to commit themselves. Thus, when the pig and the rat set their minds on settling down, one can rest guaranteed that nothing would come between them in Pig Rat sexuality. They are basically admirable since they are strong together in Pig Rat marriage. Test your marriage compatibility. 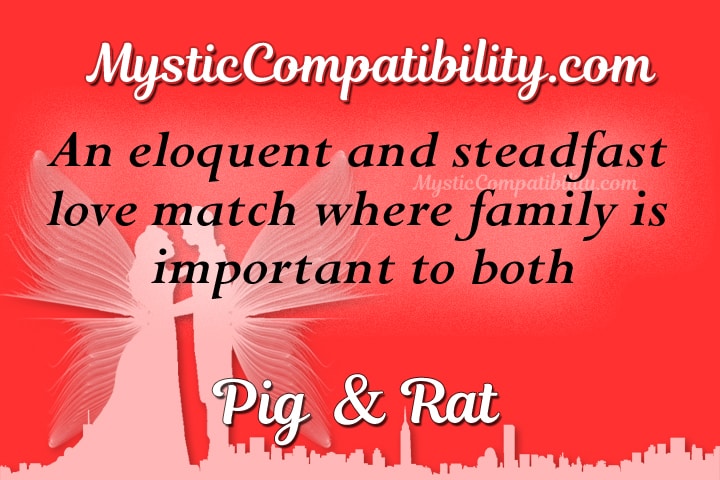 Financially, Pig Rat couple would also be at peace with each other. This is one of the areas in their relationship where Pig Rat soulmates complement each other. The rat lover is an ideal partner that should take care of financial aspect of this match. They should be the ones to handle everything that relates to money. This is because they would save for the kids and the future that is ahead of you. The good thing about the pig lover is that, they would respect the decisions that the rat would take just to ensure that money is wisely spent. They are not rebellious and therefore they would not find the rat as stringent when money matters are brought to the table.

The give and take aspect of Pig Rat compatibility would also make this relationship to blossom. This would mostly be felt from the side of the pig lover. The rat would appreciate the fact that the pig always thinks about giving. This partner is never selfish in everything that they do. They dedicate themselves to Pig Rat sexuality fully and that they would do anything to make certain that it thrives. This is an attribute that the rat would live to cherish.

Challenges are part of any relationship. Despite this, the Pig Rat in love would not want to go through this path. A major issue that they would have to deal with would be their varying emotions. The pig lover is more emotional than the rat. This implies that they would have high expectations on how love should be displayed in their family.

The pig lover expects the rat to always be there whenever they need a warm shoulder to lean on. This would not be happening any time soon. This is because the rat lover is not as emotional as the pig thinks. The rat would prefer to have some time alone with the few friends that they trust. As a result of this, there is a possibility that Pig Rat couple might fight over such issues. The pig lover ought to be understanding enough and let the rat do as they please.

The personal goals of Pig and Rat compatibility might also clash from time to time. From the pig’s point of view, they would want to make the world a better place to live. The rat would consider their actions as wasteful since there are those people who simply take advantage of their compassionate natures. The rat has different plans as they yearn for the top spot in their careers. The pig would take this as being selfish since they only concentrate on this fully without considering what is going on around them.

Consequently, there is a high likelihood of wrangles cropping up. This couple could be in good terms if they communicated more often than not. There is a need to talk about why you choose to be different. The first person that should know more about you is your lover. Make them understand and that you would avoid conflicts in your home.

The pig lover would also have to be careful with how they choose to spend their money in Pig Rat compatibility. This is an attribute that would irritate the rat lover. While the rat man thinks of saving for a rainy day, the pig thinks of spending money on lavish things. Truly, it would be hard for Pig Rat marriage compatibility to come to an agreement. The pig lover has to maintain the respect that they have for the rat when money matters are a subject of concern.

From the look of things, there is nothing challenging that would come in the way of Pig Rat compatibility couple. These lovers simply need to work on the few issues that will result in a Pig Rat break up.