Rabbit Snake relationship would be best defined by the saying that states ‘opposites attract’. Categorically, Rabbit Snake soulmates have got varying personalities that might at first mean that this relationship might not work. In spite of this, the differences that they find in each other could turn complementary and ultimately make Rabbit Snake compatibility flourish in the end.

From the rabbit’s perspective, their personalities make it easy for the snake to pry on them. This lover is normally friendly and they invite people to their lives just by the mere humility that boils in them. In addition to this, their communicative aspect is at its best as they know how to negotiate their ways with the wise choice of words that they have. It is this effective communicative aspect that will lead to avoidance of conflicts in the Rabbit Snake compatibility.

Taking the snake’s perspective, this is a somewhat different lover from the rabbit. They are mysterious and they never want people to infringe their private lives. Some of their perks would include the fact that they are romantic individuals and that they are also charming. The snake is also an independent lover and they are never good with relationships where lovers get clingy. Perhaps this is one of their disadvantages that they bring to Rabbit Snake friendship.

Rabbit Snake love compatibility could work by the mere fact that opposites attract. The physical attraction that these lovers would have for each other would pave way for a good relationship. During the initial stages of this love affair, Rabbit Snake in love will notice that their lovers possess a unique quality that the other lacks. This one of the ways to which Rabbit dating Snake would be attracted to each other in the beginning. Fortunately, if both of them are compromising, they should find it worthy to work on their relationship. Try this FLAMES love test.

With regards to the personal attributes of both lovers, the rabbit admires the snake’s secret way of life. They are never ready to spill the beans about the internal affairs of Rabbit Snake compatibility. Considering the fact that the rabbit prefers to live a quiet life, they would find the secret life of the snake to be interesting when they are associated with it.

On the other hand, the snake would admire the charm and the smooth way of conversing from the rabbit lover. They know how to pick their words and this is what earns them popularity that is behind them. The snake would be happy that they can enter into a productive communication with the rabbit lover. Indeed, this is a recipe for a successful Rabbit Snake love compatibility.

The passionate nature of both lovers will have an impact on Rabbit Snake sexuality. It is quite predictable that Rabbit Snake marriage will enjoy the romantic outings that they would have together. Romantic gestures would be expected from each lover. Well, certainly, this will only happen if the snake lover takes their time to date a rabbit that is faithful and compromising at the same time.

This romance would be crowned with Rabbit Snake in bed as both partners know how to please each other beyond their anticipation. Undeniably, these are the moments that you would treasure in Rabbit Snake compatibility that you would be sharing. If all goes well, these memories would be kept in an album for your children to see and appreciate the importance of love. 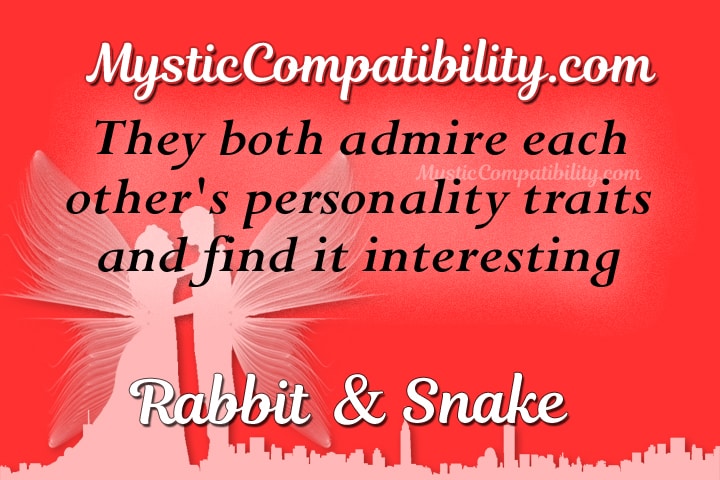 Rabbit Snake love compatibility would also benefit from the mere fact that the rabbit knows what the good life is all about. They know how to enjoy themselves to the fullest. This means that they would help the snake in relieving the stress they might have gone through at work. The snake would be glad to accompany this lover to the romantic place that is kept secret for them.

Rabbit and Snake compatibility could get bumpy along the way. This is primarily attributed to the differences in personalities that stand between this couple. For example, the snake lover might get demanding and they could end up pushing their rabbit lovers away. In most cases, the snake lusts for admiration from the outer world. This is something that the rabbit might not be able to provide for them. They would see this as a way of hindering them from being independent. Therefore, the snake should be careful on how demanding they get on the meek rabbit. Otherwise Rabbit Snake break up will be a reality.

The other issue for Rabbit Snake love compatibility would be the fact that lovers have a worrying attitude that boils in them. It is for this reason that both of them could take time before opening up to each other. This implies that building trust on each other might take longer than expected. This could pose as a stumbling block for both partners since their love takes time before picking up.

How would the snake behave when the rabbit gets too social with other people, more so those of opposite sex? Undeniably, considering the fact that they are possessive lovers, there is a possibility that they might not take this social nature in a positive way. The snake might consider this as being flirty and could therefore cause conflicts in the Rabbit Snake sexuality.

The worst part is that the rabbit lover might not have room for such jealousy in Rabbit Snake compatibility. Mutual understanding is what is needed here. Lovers ought to understand the different attributes that each one of them posses. This would in the end help them to accommodate each other in spite of the varying personalities that they have.

Money could also be another source of conflict in Rabbit and Snake compatibility. Both of them have an inclination for material things. They would want to buy the most expensive things in their home. In as much as they would be doing this together, there is a looming danger that they might run bankrupt anytime soon.

This is what worries the rabbit lover most. They are not certain about the financial security of their relationship. So, what should they do? They simply need to talk this out with the snake lover. Keeping in mind that they are excellent in communication, this should not be a tough task for them. Perhaps this will help them to be more careful the next time they are out shopping.

Rabbit Snake love match is promising. If the lovers are cautious enough to concentrate on what’s good for both of them, there is a good chance that their love would thrive. In addition to this, it is good to mention the fact that both of them move at the same pace. This means that they can be tolerant enough to accommodate the weaknesses of their counterparts. This is what this love demands for.

From one end, the rabbit should see past the jealous eyes of the snake lover. They are so jealous because they truly feel something special for the rabbit. Hence, they ought to consider this from a positive angle. On the other hand, the snake should appreciate the rabbit by respecting the humble nature that they bring to this relationship. When all these happen, this couple should meet halfway and enjoy the fruits of blissful Rabbit Snake marriage compatibility.