Compatibility studies normally reveal the chances of a particular love affair working. Truly, judging from the similarities and differences portrayed in various Chinese zodiac, one can argue that a certain love affair might work or not. This is the same thing that you ought to be doing prior to settling for any individual. First, get some insights on the Chinese zodiac that they belong to. From this point, you would be in a better position to gauge the direction where your relationship is heading to. The pros and cons of Rat Dragon compatibility are as discussed below.

Rat Dragon love compatibility is a match which can succeed. By taking a look at the individual attributes of these lovers, one can claim that Rat Dragon in love could make it to the end. Indeed, this is true. They have certain qualities that bring them together rather than drift them apart from each other.

The advantages that accrue to Rat Dragon compatibility come as a result of the individual characteristics of Rat Dragon soulmates. Taking a look at the Chinese Dragon sign, there is a domineering attitude about this lover. They also fancy the exciting way of life. This is a good thing to the Rat bearing in mind that they are also after the same way of living. The generosity that Dragon portrays is yet another aspect the makes the Rat fall for them. They do care about the family that these two might be forming. This is something that gives Rat dating Dragon the perception that the Dragon could be a family guy too.

On the other hand lies the Rat lover in this Chinese compatibility. This is an individual that loves socializing and making new friends. Maybe this couple even met at a night out where they were having a party for one of their friends. Their witty nature is an aspect that the Dragon admires most. They seem to have an answer for everything that they are asked. When gossip is around town, rest assured that the Rat must be involved somewhere. They simply love to be in the midst of some heated gossip going on. The most interesting aspect of this lover is that they are good when it comes to saving money for a good purpose. This is one interesting aspect that would be helpful in making sure that Rat Dragon compatibility stands on a solid ground financially.

In Rat and Dragon compatibility, this couple will find that they have a shared perspective with regards to adventure. This could have a positive impact on their relationship with Rat dragon in bed. The Dragon should rest assured that the Rat would be ready for any sexual activity that they bring up. The best part is that the Rat can engage in any sexual relations as long as it gets exciting along the way. Rat Dragon love compatibility is simply a match that can be filled with extreme passions from all corners.

In a business relationship, Rat and Dragon compatibility can be a successful one. This is because of the perspective that both lovers taken concerning the projects that they would be undertaking. This couple believes in the fact that actions speak louder than words. Therefore, they would work through toil and moil to make certain that their ideas are conceptualized.

The love for real adventure is an aspect that will keep the Rat Dragon love compatibility going. If Dragon is the man, he will take the lead in this relationship. The Rat might not take this personally considering the fact that the dragon will ensure that they are ever excited. It is from this excitement that this couple will find it difficult to stay away from each other. One thing for certain is that Rat Dragon sexuality would be growing without them noticing it. Truly, this is the best form of love that other couples ought to emulate.

In relation to independence issues, Rat Dragon marriage is commendable. None of the lovers pokes the other when they are out having fun. Both of them understand the need for freedom that the other lover hankers for. This means that, there is a dwindling chance for this couple to fight over independence issues. Moreover, they would not feel as though they are being constrained in Rat Dragon compatibility. Thus, there is no reason that could make them look for greener pastures in other Chinese zodiac.

Relationships are bound to face difficulties. This is a notion that Rat Dragon love compatibility should be aware of. They could be in a rush to a Rat Dragon breakup when their relationship is not on a good run. Understanding each other would be helpful as it ensures that Rat Dragon friendship give each other the time they need to adjust. If there is a problem in their love affair, they should employ their social skills in talking it out rather than engaging in a fist manner of sorting things out.

When Rat Dragon compatibility gets bumpy, the Dragon woman might be over demanding when it comes to their aspect of being admired. They lust for admiration and this is an aspect that the Rat might be able to keep up with in the short run. Over the long haul, chances are that the Rat might get tired of this. Therefore, the Dragon lover should be careful on how they demand for love to be shown to them. 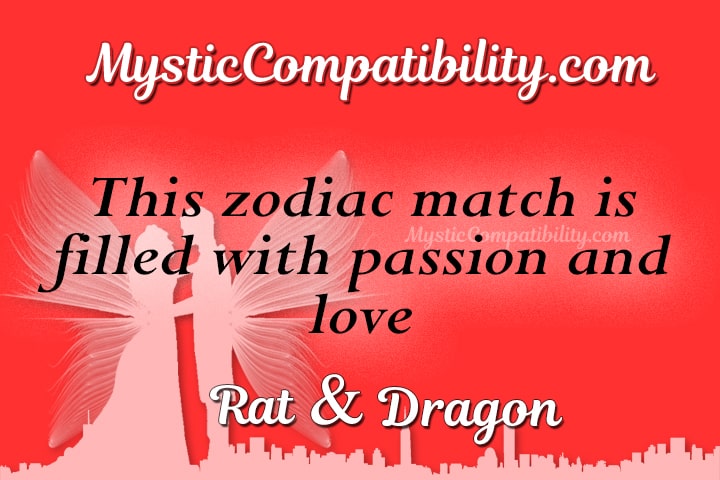 There is also a looming danger that might occur more so from the Dragon’s end. Ask yourself this question; what happens when the Dragon lover gets too bossy? Will the Rat accommodate this behaviour in Rat Dragon compatibility? Certainly, there is a small chance that the Rat might condone this bossy attitude in their love affair. If there is one thing that Rat Dragon sexuality needs to iron out before settling down, it should be their boundaries. This will help them to avoid any wrangles that relate to the bossy attitude of the Dragon lover. Try this FLAMES love test.

One tip that this lover should have in mind is that; it is important to respect each other’s position in a love affair. The use of power might not in any way be helpful in winning the loving heart of your partner. Try something else but not ordering them around. Doing this will only pose a risk of your lover rushing out to find a better lover.

For Rat Dragon love compatibility to work, this couple will have to appreciate the aspect of learning. This is a process that never ends in any love affair. Couples should be ready to adjust if at all they find love in each other. For example, the Dragon lover should be ready to turn down their controlling natures. This is the best way that the Rat would appreciate the passionate love coming from their ends. Equally, the Rat should also be ready to face challenges with the Dragon lover. This is not the time to escape Rat Dragon marriage compatibility when their counterparts need them the most. Standing tall together is the way to go.

In addition to the above, Rat Dragon compatibility should come to terms with the notion that ‘it takes two to tango’. Their love would not work if at all they operate like enemies. They should be each other’s shoulder in times of need.