If you are born under the year of the sheep, people will often perceive you as the most calm individual. Undeniably, you are an easy going lover and that people would always crowd around you. No one would think that you cannot make up a good friend or a lover. The only thing making people scare away from you is your emotional side. You tend to be moody at times and this is one of the major disadvantages that other people find in sheep sheep compatibility.

Keeping in mind that you are paired with another sheep lover, there is a big chance that sheep sheep compatibility can stand the test of time. Your similarities will constantly bring both of you together. Sheep man and sheep woman would be both emotional in their love affair. This means that you might have to understand each other for this love match to flourish with minimal conflicts. There are both pros and cons to a sheep sheep love compatibility.

Now that sheep dating sheep are brought together in a relationship, there is a likelihood that getting along together might not be a daunting task. After all, there is nothing surprising that the other lover would do to make you angry. You know your man or woman to great extent and this is one of the most important things in sheep sheep love compatibility. Take this FLAMES love test.

Communication would also be at par in sheep and sheep compatibility. The harmony that the man and woman would have in their love affair would pave way for a communicative sheep sheep relationship. The sheep woman would not be afraid to communicate with the man of the house. If there is something that is bothering them, they would point this out bluntly and the man would respond to this accordingly. When communication is great, lovers will understand each other in depth as days go. This is a recipe for a warm love affair where partners are always open to each other.

Sheep sheep love compatibility is an emotional relationship. Both the man and woman would carry their hearts on their sleeves. This can be a disadvantage when they are matched up with other earth signs. The good news for the sheep couple is that they are on the same page here. Therefore, there is an added advantage to their emotional natures. This will ensure that their love is stronger than ever before. The bond that they would create would keep them together for a very long time. The strength that they have together is what other lovers might lack. Therefore, they would be admired for this.

When the sheep man/woman is paired with other animal signs, they are normally regarded as the most caring individuals. Sheep sheep sexuality is good when it comes to displaying acts of love. Considering the fact that they are together they would find a way of proving to each other how much they are in love with each other. These two will never shy away from publicly showing each other that they are truly in love.

This is a good feeling for both of them as it guarantees the other lover that they are at the right place with the right person. The other advantage of this is that lovers would trust each other. The sheep partner is not an individual that would stray. This implies that the man or woman would find no reason not to trust each other in sheep sheep compatibility. Get your Chinese compatibility reading.

Sex would definitely be great for sheep sheep in bed. Sheep sheep love compatibility is a union of two caring and emotional individuals. This means that to both of them, sex would be based on the emotional connection that they have in their love affair. Sheep sheep marriage would focus on connecting with each other at great depths before they can get intimate. 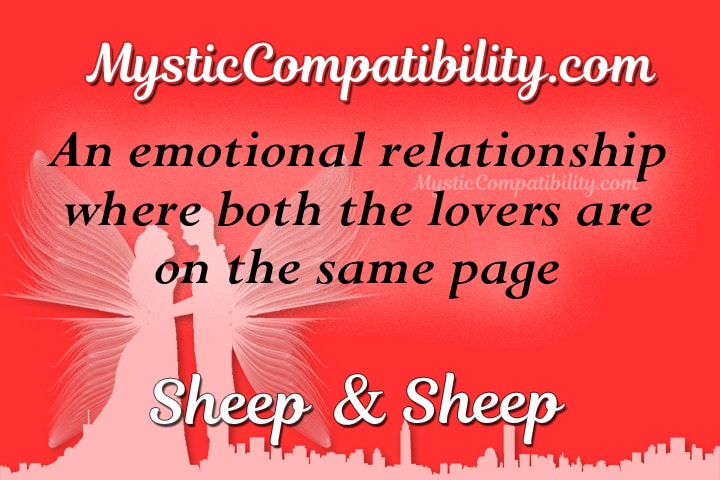 Consequently, when they decide to get serious, they would be doing this for the right reasons. This makes sheep sheep in love such an admirable couple as their bond also gets to be stronger and interesting at the same time.

In spite of the goodness of this love affair, sheep sheep compatibility would face several challenges here and there. Partners would have to seek for stability from other areas since they are both weak signs. This is one of the major disadvantages of this match. Both of them would be facing a huge risk that their love might be washed away by harsh storms that might be coming their way.

Bear in mind that the sheep lover is well known for their escapism. They always run at the first sight of trouble. This occurs because they are not used to living with stress. As a result, this is one of the things that the sheep man and woman would have to be wary of. Constant communication would give them the strength to face challenges together.

Sheep sheep love compatibility would also be filled with drama. They are both emotional signs and thus you could expect that these two would be full of drama in their relationship. Mutual understanding is important to ensure that they do not end up breaking up for the wrong reasons.

Sheep sheep soulmates should accommodate each other since they are well aware of where the emotions might be coming from. The last thing that the sheep should do is to run away from this relationship simply because they cannot tolerate the emotional man or woman. Learn to adapt, as this is one of the recipes of a blissful sheep sheep sexuality.

Sheep sheep marriage compatibility would also suffer a lot from the fact that they lack practicality. When two emotional signs are paired, there is a likelihood that they might get lost in their dreamland. This is the risk that the sheep man and woman would be facing. None of them would be courageous enough to wake up the other to face the harsh realities of life. This means that both of them might spend their time focusing on issues that might not help them in any way. They should be very careful about this to avoid a goat goat break up.

In relation to their finances, man and woman ought to find a way of managing their finances. They are prone to excessive spending. This is one of the things that they would be doing during their free time. Their lack of responsibility might affect them as they might run away from being responsible more so during the late stages of sheep sheep love compatibility.

Ram ram love compatibility is an affair that has all the ingredients required to make a blissful relationship. Within this relationship, you can find love, peace, joy, trust and even compromise. This implies that these two would not have a hard time trying to make things work in their relationship.

When it comes to their goals in life, sheep sheep compatibility would be looking in the same direction. Thus, there is nothing serious that might distract them from the main goal they share in this match. The only issue that could have an impact in this match is their emotional natures. They should find a way of balancing this. Their emotions might get better of them and end up ruining this union. Consequently, they should understand each other and keep their emotions far from them.