In life, people always consider themselves as different. This is the main reason why when choosing their life partners, they tend to be selective and they only settle for people that they find as compatible in their lives. In order to ensure that people are compatible, they normally consider the similarities and differences that they find in each other. If there are many similarities as compared to their differences, then couples could argue that they are compatible. On the other hand, if they find many differences in their personalities, couples could end up claiming that they are a mismatch. Well, one thing that they should be aware of is that their differences could also be complementary. This means that differences in personalities could also have an impact on whether or not lovers are compatible as in the case of Dragon Rooster compatibility.

In the case of Dragon Rooster compatibility, lovers do not have many similarities that they see in each other. Despite this, Dragon Rooster in love are considered as a good match simply because these differences could mean that their love affair is complementary in nature. The dragon would expect the rooster lover to fill in for them in areas that they find themselves as weak. Equally, the rooster also expects the dragon to help them up whenever they feel they are in need. Some of the pros and cons of this Chinese zodiac compatible relationship are looked at in detail below.

One of the main reasons why Dragon Rooster friendship would work is because they have varying approaches to their ways of life. From the rooster’s perspective, they are perfectionists. This implies that they would try their best to change everything that is around them. In terms of business projects, the rooster will be cautious enough to ensure that these projects are handled according to plan. This is not the way of life of the dragon lover. The dragon would not be concerned about the finer details about a particular activity.

As a matter of fact, they are quite impulsive. Hence, they jump into decisions without having second thoughts on their repercussions. In Dragon Rooster compatibility, these lovers would help each other out. The rooster will help the dragon think over their decisions whereas the rooster would benefit from the quick decision making process whenever urgent matters are at hand.

There is also a likelihood that the Dragon Rooster love compatibility would be a relationship that is associated with success. Dragon Rooster soulmates are quite industrious. This is a plus for both of them as they act as a team when trying to provide for the family that they have together. Their individual efforts are recognized as they find it easy to chip in and make things work to their advantage. When the dragon is out looking for money, the rooster would be careful to ensure that they have a comfortable home to retreat to. Their love is all about giving and taking and as a result they find themselves as a good match for each other in Dragon Rooster marriage.

Sex would also be worth craving for in the Dragon Rooster love compatibility. The rooster finds the dragon as the most intimate lover with in bed. They fulfill them in their sexual pleasures in ways that they have never experienced before. As for the dragon lover, they ought to be compromising enough to appreciate the perfection that would be coming from the rooster lover. Perhaps the rooster lover would know the best ways of enticing the dragon. As a result, for both of them to appreciate the love they have for each other, they would have to be tolerant enough to accommodate each other in Dragon Rooster sexuality. 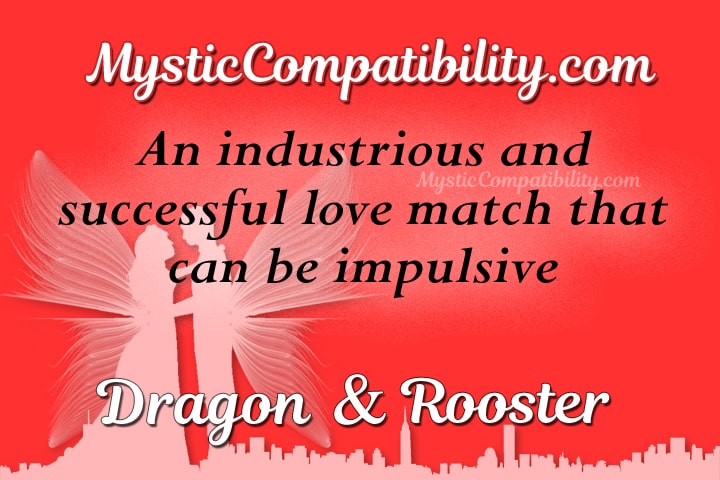 In spite of the good things that they find in each other, Dragon and Rooster compatibility could enter into conflicts with each other. These conflicts would come up as a result of the variation in their personalities. The worst part is that the rooster would be a perfectionist to notice that people are prone to mistakes. When the dragon ends up making the wrong decisions due to their impulsive natures, there is a possibility that they rooster would fuss and fight over such impulsiveness. For things to flow smoothly to avoid a Dragon Rooster break up, compromise is required from both sides.

Another area of contention would be the ego that would be coming from the dragon lover. They would want to take the lead in Dragon Rooster compatibility. Their bossy attitude is an aspect that might not be tolerated by the rooster. While the dragon demands that things should be done by following their set rules, the rooster will want to make certain that there are no mistakes in their love affair. Test your Feng Shui compatibility.

From the look of things, this is not a naturally existing love affair. Everything seems to be staged for the Dragon Rooster love compatibility. As a result, this love affair would seem perfect outside but on the inside, lovers would fight to deal with their innate challenges.

Socially, Dragon and Rooster compatibility is a mismatch. This is simply because they have different perceptions with regards to how they should spend their free time. The dragon prefers to spend this time with their close friends. On the contrary, the rooster is a homely bird and as a result staying at home would be the best way to kill time.

In Dragon Rooster relationship, lovers could annoy each other’s way of spending their free time. The dragon for example will consider the rooster as a boring partner that is never ready to step outside. Likewise, the rooster will consider the dragon as a lover that does not live a practical life. Assuming that lovers are understanding, Dragon Rooster compatibility should find these differences as complementary.

Dragon Rooster in love is a promising match with high chances of succeeding. The only thing that is required from this couple is for them to realize that there is a need to meet halfway. This is the position that would ensure both of them see both sides of their love affair. They would focus on the good side and try to polish the flaws that they find in each other. Indeed, this is the recipe for a happily ever after love match.

Compromise, mutual understanding and respect are some of the attributes that would be required to make certain that this relationship thrives. With these attributes working in favor of their relationship, lovers would see that they are fit for each other. After all, what matters most is the love that they have for each other. This is the driving factor that they ought to focus on above anything else in their love affair. Dragon Rooster compatibility would certainly succeed both in the short and in the long run.