Since the beginning of times men and women have had their roles in this life. Nowadays, some of these roles are still accurate, but a lot has changed. Still, people have generalized beliefs that are stuck deep in our minds. Without even noticing, we assume certain things about a person just because of their gender.

In this article you can read about the 10 biggest myths about men. You will be surprised- some of these myths have probably crossed your mind.

You have probably heard of the expression “boys don’t cry”. From an early age most men are taught to be emotionally strong and never express their emotions. As it turns out, men also have emotions. In fact, as children boys have more emotions than girls. Mostly men hide their emotions because society tells them to. Crying for a male is a sign of weakness and nobody wants to feel that way.

A lot of women envy men because they believe men have it easy. It doesn’t take a lot of time or effort for them to get ready. Also, men don’t have to deal with periods and childbirth. It is true, that women are expected to put more effort in their appearances. But society also pressures men to be successful in their careers. In many cases men are valued based on their income.

#3. Men are only looking for sex

It is true that some men are not looking to get married very soon. Some even might never find a person to commit to. But most men at some point in their lives want to have family and children. It might take men longer time to settle down, but eventually almost all do. 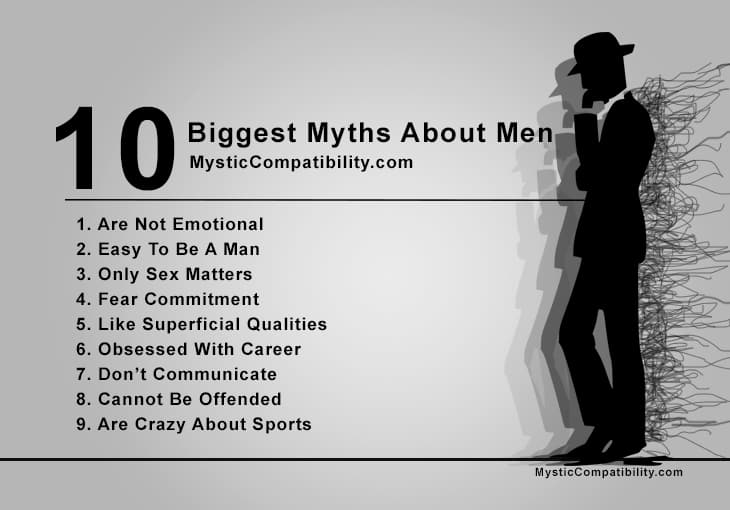 #5. Men are only attracted to superficial qualities

Of course, men are attracted to some level of superficiality. Good looks are something that all people are attracted to. But when it comes to long term relationship, most men are looking for deeper qualities than just good looks. Most men want a partner that they can share their thoughts and passions with. Intelligence is a quality that most men find to be the most important.

#6. Men are obsessed with their career

Many men are driven by success. They want to excel at what they do, because it somehow proves their manhood. Having trouble in their jobs or losing a job can be a very stressful experience. For men it can be even harder because they are expected to be providers and have success. Many men would rather prefer to have an easier, less stressful job.

Men like to talk a lot, sometimes even more than women. When a guy finds someone they enjoy communicating with, he will probably share a lot. Men especially enjoy talking about their achievements or share their knowledge.

This relationship myth completely depends on each personality, but men can be as easily offended as women. Some men can be completely indifferent what anyone thinks of them, while some can take the smallest offense personally.

#9. All men are crazy about sports

Although most men enjoy watching and participating in sports activities, it is not correct to say that they all love it. Some men participate in sports for health benefits. Not all men are so keen to endlessly watch sports games on TV.

#10. Men tell their friends everything about their sex lives

Turns out, men like to gossip about many things with their friends. Although they might tell some things about their dating adventures, most men choose to keep details to themselves.

These are the most popular myths about men, but there surely are many more. Although there might be some guys that fit the bill, mostly these qualities are superficial. Once you get to know the true personality of someone, they can turn out to be completely different from what you have imagined.

Contents show
10 Biggest Myths About Men
#1. Men have limited ability to feel emotions
#2. It is easy to be a guy
#3. Men are only looking for sex
#4. Men fear commitment
#5. Men are only attracted to superficial qualities
#6. Men are obsessed with their career
#7. Men don’t like to communicate
#8. Men can’t be offended easily
#9. All men are crazy about sports
#10. Men tell their friends everything about their sex lives
Conclusion
Share