How to Know Your Boss Has a Crush on You?

Having a crush on someone is something we have all experienced before. There are times you have a deep affection for somebody, but saying it becomes a big problem. So you may resort to some verbal and nonverbal ways to send that signal. This can also happen in the environment. Your boss may have a crush on you and would express it in diverse ways. Has he/she been sending you complimentary messages recently? Is he/she nicer to you than before? So there is a possibility of him/her having a crush on you. I use the word “possibility” because you have to tread cautiously.

Your Boss Has a Crush on You – Is it TRUE?

1.  Your Boss Acting More Casual With You than Before?

Your boss may tend to cut all forms of formalities with and start to act casually towards you. Also, your once strict and no-nonsense boss may begin to relate to you as if you have been friends from Adam.

He or she may begin to cut all forms of protocols for you to feel comfortable when around them. Your boss may start to have conversations, which are not related to work with you.

2. Look for the Flirts

If your boss starts to flirt with you, it is a sign of him/her having a crush on you. But before you reach such a conclusion, you need to observe how your boss relates to your other colleagues.

Some people are flirty, and your boss may be one. So you need to know whether he/she acts the same way with other workers or they are just reciprocating your flirting gestures towards them. If the answer is none of the above, then he/she may have some feelings towards you.

3. Boss Spends More Time With You

If your boss truly has a crush on you, they will find diverse ways to keep you around them. They may assign you to projects in which you would directly report to them or work together with you.

There are times that your boss may genuinely assign you a project or work with you on specific projects. But when this happens more frequently than usual, then he/she may have other intentions. Another method your boss can use it always engaging you in a long hour “unnecessary” meetings. The strange thing is that the meeting would mostly be between the two of you.

4. They Start Calling/Texting You

If your boss starts to call/text you on trivial things, then he/she may be cooking up something. In a normal sense, managers have hectic schedules and find little time to make unprofitable calls. So if your boss finds enough time to call you without a particular reason, then open your eyes widely. He/she may be having you in mind.

Actions speak louder than words so your boss’s body language may be speaking to you directly and indirectly. If you notice him/her making long glances at you at you being near or afar, it is a sign that they have an interest in you.

This can be a two-way thing. Your boss may give you preferential treatment because of your hard work and commitment. But when you start receiving unmerited favors and treatments from your boss, then know that he/she is up to something. Remember that there is no free lunch anywhere.

7. Make Advances Towards You

Aside from the obvious eye contacts, your boss may start to make physical advances towards you. They may start touching you, and that can be very uncomfortable especially when he/she touches a sensitive place. You can express your displeasure when you feel uncomfortable about such touches. But know that when such things happen, it may be their way of expressing their feelings towards you.

When you love someone, you begin to love everything thing about the person. So your boss will start taking a special interest in whatever you say even if it is silly.

He or she would laugh to you unfunny jokes and will begin to support your motion during an office debate. Whenever you give your opinion on a subject matter, they value it more than any other views.

Many people prefer to keep their issue as such without inviting any third party into it. So if your boss begins to tell you his/her issues to seek your advice and empathy, then he/she sees you more than just a subordinate. The fact that they can confide in you means there is an established trust and want to build a personal relationship with you.

10. Begin to Compliment You on Little Things

Recognizing the effort of workers and complimenting them accordingly is a great way to get the best out of them. It becomes a motivational tool for them to work more. But what happens if your boss always gives you overblown compliments. It would look strange right! But your boss can’t help it when he/she is in love. They will try to look nicer to you by complimenting your less effort.

Even after a general compliment to all workers for successful teamwork or project, they would want to single you out to give you special compliments. They may also start to compliment your attributes like fashion sense, being trendy, your looks, and many others. If your boss starts to go on such tangents, then he/she is in love. 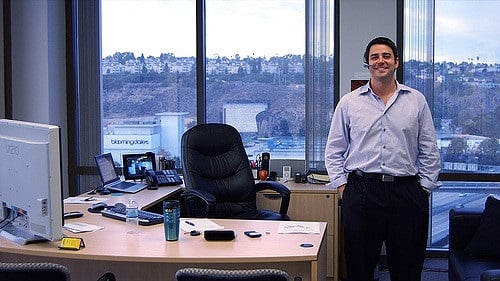 11. They Start to Give You Gifts

Giving out gifts, especially on special occasions like Christmas, is something almost every company does. So it may be a normal practice for your boss to give you and other workers gifts. But when he/she begins to single you out for special gifts out the workplace, then they are not rewarding your hard work. They have other intentions.

If your boss begins to ask you out for special dates outside working hours, it could be a red flag that he/she has an interest in you. They use such periods to spend more time with you to get to know you more outside the work environment.

Contents show
How to Know Your Boss Has a Crush on You?
Your Boss Has a Crush on You – Is it TRUE?
1. Your Boss Acting More Casual With You than Before?
2. Look for the Flirts
3. Boss Spends More Time With You
4. They Start Calling/Texting You
5. Study Body Language
6. Start Giving You Special Favours
7. Make Advances Towards You
8. Begin to Attach Interest
9. Become A Confidant
10. Begin to Compliment You on Little Things
11. They Start to Give You Gifts
12. Boss May Ask You for a Date
Share

Reasons to Start your Own Business With A Loved One