With both partners sharing all the similarities from their world, there is a future expected in Taurus Taurus compatibility. The sheer fact that love is based on similarities rather than differences, implies that this kind of a relationship will blossom into something worth admiring by many.

One of the main reasons as to why this relationship might have a chance of succeeding is the fact that lovers look for security from each other. They also expect that every partner should contribute towards the success of the relationship. Hence, this is a give and take type of Taurus Taurus relationship where lovers are meant to appreciate the presence of each other in unique ways.

There is a lot to talk about in terms of the benefits that both lovers would be getting in Taurus Taurus compatibility. One of the most admirable aspects of this relationship between two Taurus individuals is the mutual understanding that they have for each other. Test your palmistry compatibility.

This is the match where it would not be surprising to hear one say that ‘you are my rock’. Certainly, Taurus Taurus soulmates here would find more reasons to weather any storm that comes their way. It is through understanding that love would take time before it withers in Taurus Taurus friendship.

Another good reason why Taurus and Taurus compatibility would have high chance of succeeding is the fact that they share similarities. This enables both lovers to understand and meet each other’s needs in unique ways. For example, take a scenario where the Taurus man comes home from work feeling exhausted. The man would expect the best to be prepared for them to ease their tiredness.

Without a shred of doubt, this is something that the Taurus woman would have in store for them. Perhaps they would make sure that food is ready for them to eat or simply a light meal to cheer them up. What would you expect an Aries or a Gemini partner to do? They might drag the Taurus man to a nightclub, which is certainly not their thing.

Trust is very important for any relationship to succeed. Well, the good news is that this is not what you would be worried about in the Taurus Taurus love compatibility. Both of you are emotional and you definitely understand the importance of trust in the relationship that you are in. this means that no partner would be taking chances to cheat behind the backs of the other. With regards to such trust levels being depicted from both of your ends, you certainly expect the best from Taurus dating Taurus. Test your FLAMES love match.

There is also a good chance that your partner would appreciate the fact that you have similar views with regards to the issue of having a family. This is linked to the idea that both of you guys fancy the notion of being parents sometime in the near future.

Similarly, your partner will restrain from having conflicting views on financial matters in Taurus and Taurus marriage. This also means that you might have to sit down and have a business plan of how things will be done. This ensures that both of you enjoy the proceeds from what you might be running. This is certainly the most ideal form of Taurus Taurus compatibility that you can ever find.

The Taurus Taurus love compatibility would also not fail any marriage compatibility tests bearing in mind that both lovebirds have a similar future that they are aspiring to obtain. In matters relating to their careers, partners here will focus on being the best. The Taurus man will always work hard with an aim of providing his family with a stable and comfortable life. The Taurus woman would not just sit and watch the man do everything. They will also work to guarantee that their male counterparts are loved. Their emotional power could give a boost to the man’s energy of looking for more money.

Taurus and Taurus in bed would be at their best in the union. What they fancy most is the sensual nature that both of them share. This means that they would not be in any rush to get to climax. Taurus greatly appreciates love that is gained without being rushed into things. This is simply what they would be getting from their partners. 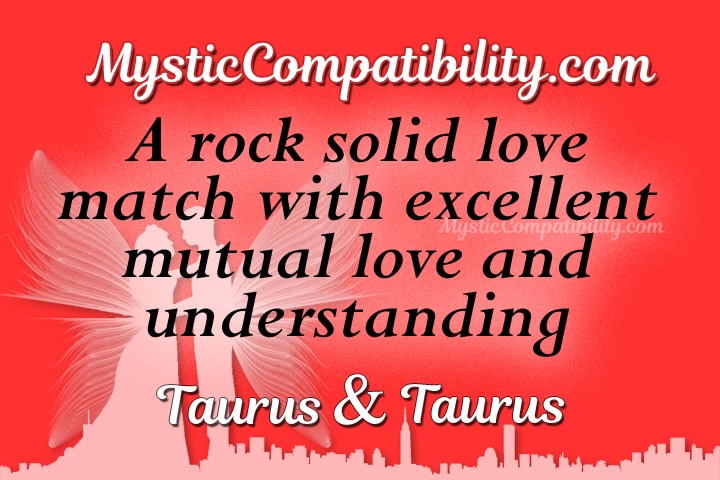 Taurus Taurus in love have many similarities. This does not necessarily mean that the relationship will be free from troubles. The first thing that you would have to deal with is the resistance that both of you guys have when it comes to change.

None of you is willing to change for the better. Undeniably, there are instances where a change would be helpful to both of you more so in matters that touch on achieving your personal goals. Therefore, some adjustment would be recommended from time to time if you really need to make Taurus Taurus compatibility work.

In as much as both lovers will have a thing for similar activities, this could affect them in the way they relate to the outer world. Taurus Taurus love compatibility opts to sit at home and enjoy the small talk that they could have. Socially, this is termed as being anti-social. People might find them to be a couple not to hang around with during parties and other life events such as marriages. Consequently, lovers in such a relationship might find themselves lonely in their own little world. Get your lucky marriage date.

Taurus Taurus compatibility might also be in trouble when arguments arise in this quite relationship. In some way, it could be compared to the experience that one would get after pricking a lion that they thought was dead. Things might turn around for the worst as both lovers would not be willing to let the other win. As such, Taurus Taurus break up is a possibility when things turn around.

The boring kind of a relationship experienced in Taurus Taurus love compatibility could make things bad in the end for lovers here. Love could take a long time to break down but in real sense its joy and spontaneity is lost. It might take some time for the lovers to notice this considering the fact that they are contented with what they have. Comparing Taurus Taurus sexuality to the sexuality with other zodiac signs brings out a tale of a sad love story.

The courtship zone might also take too long than expected. This is something that makes the entire union unattractive. Both Taurean lovers would be careful enough not to fall in for any moves that might take them the wrong way. Thus, it is expected that they might take a lot of time to appreciate the love of each other and achieve Taurus and Taurus compatibility.

In summary, Taurus Taurus marriage compatibility is held together by the similarities that exist between lovers. Taurean lovers have an equal chance of appreciating the need for each other’s presence whether emotionally or physically. Equally, trust is an attribute that would take them all the way to marriage.

In spite of the goodness that would be from both side, the relationship also has its pitfalls including the fact that the Taurus Taurus sexuality is boring. Moreover, both lovers are from fixed zodiac sings hence you should not expect any form of change to come from either side. The question is: would there be any improvement in this Taurus Taurus compatibility ever?