Taurus women are usually born between April 20th through May 20th. However, these zodiac dates can sometimes change by a day or two based on the cusp. The Taurus woman is one of the most determined there are. She will stop at nothing to complete a goal once she has her mind set on it. Sure, this does mean that she can be a bit stubborn, but it does help her to keep her eye on the prize and to help her finish her goals.

Taurus women like their lives to be as stable as possible. They aren’t one to rock the boat, but they are one to throw a fit if someone else does. She takes just about everything seriously. She’s likely to get upset when others don’t. That’s not to say that she is cruel. Anyone who gets on her good side will be lucky, as Taurus females are as sweet as sugar when they are in a good mood.

This Taurus lady is complicated and hard to understand. Once a person does get to know her better, they are sure to be better off for it. A Taurus woman is one of the world’s many wonders.

Taurus woman personality traits shows that they are highly traditional when it comes to love and sex. She is not one to cover up her feelings and make her partner guess how she is feeling. She is an affectionate woman, and she will tell her partner when she falls in love. Online relationships can be more difficult for the Taurus woman. But, if they are truly in love, then they will work hard to keep the relationship working. Taurus women will often want to get married sometime after they fall in love.

Taurus ladies are very loyal and they are not likely to cheat. Loyalty is one of the most important things to a Taurus woman in love. She will be highly upset if her partner cheats on her. She will likely dump them and never forgive them for what they have done to her. Anyone who is kind to a Taurus woman will be in her good graces, but anyone who betrays or hurts a Taurus woman will feel the sting of her scorn for as long as they know her.

In bed, Taurus women don’t care about any extras that come with sex, she just wants to get to the point. Of course, she still loves foreplay, but she’s not especially interested in playing out any fantasies. Role playing and most other kinks aren’t for her. Instead, she likes to take her time in bed. She may not be wild and crazy, but she is passionate and caring. The Taurus female is sure to please her partner in many ways, even if she doesn’t need to think outside of the box to do so.

Taurus woman traits show that they are not especially creative. So they won’t throw away a good job to do something artistic. She is likely to find a job that she can be content with. A perfect job for a Taurus woman is one with steady employment, good payments, and something that she can see herself doing for years. She likes to work at a slow and steady pace, so even jobs that can be a bit tedious at times are good enough for her. A job she won’t like is one that puts her in any awkward positions. Flashy jobs or jobs where she is not treated well are terrible for Taurus women. 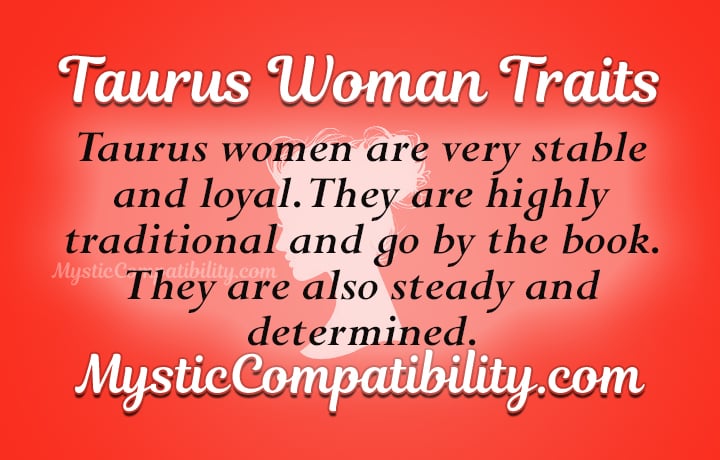 The Taurus woman personality loves money. So she loves to be in charge of it. She is not one to give her money to a spouse to take care of. She wants to watch her own money and spend it on what she wants. She does love the finer things in life. But she also knows better than to spend all of her money on things that she doesn’t actually need. In this way, the Taurus lady keeps her financial life very balanced.

The Taurus woman personality loves it when her life is stable and when everything seems to be balanced and going well. However, her health, both mental and physical, may suffer if there is a problem in this area of her life. She is likely to become stressed out or anxious. These may contribute to depression, which can lead to a number of other health conditions.

Taurus zodiac sign’s ruled body part is the throat. While this does mean that many Taurus women are great singers and public speakers, it also means that this part of their body is more vulnerable than others. Sore throats are a common health complaint from Taurus females.

The Taurus woman characteristics suggest that she takes the word ‘loyal’ seriously. If a Taurus woman says that she is your friend, then it’s almost a sure fact that you will be friends for the rest of your life. She is not likely to have many friends, but she is very close to the friends that she does have. She will always keep a secret for a friend and help them out if they ever need anything important.

The Taurus woman does not fight with her friends often. She is more likely to ignore people who she does not like. She does have a temper, but she doesn’t like to let it show. She hates to fight with anyone, especially her friends, so she will try to avoid this as best as she can.

Taurus women tend to look back on their childhoods in positive ways. Because of this, they will often try to keep family bonds strong as they get older. A Taurus girl will likely want her children to spend time with her family members. Family loyalty is highly important for the Taurus woman.

Many Taurus women dream of being mothers one day, and she is sure to make a great mother once she becomes one. She adores her children and pampers them when they behave. However, she also has a zero tolerance level for nonsense and trouble making, so she will punish her child if she has to. Her main goal is to raise children that remind her of herself.

The Taurus woman personality traits show that she likes to keep most things in her life simple. But she loves to get a little crazy with her fashion sense. She loves designer brands and bright colors that pop. She tends to stick with styles that she can wear both at work, at fancy dinner parties, and while relaxing at home. Some days she may dress flashy to impress a date. But most of the time she manages to look stunning in business casual attire. Emerald is her best color, so she is likely to wear it often. She will also look great in earth tones since Taurus is an earth sign.

Emerald is not only her lucky color but also her sign’s gemstone. The Taurus woman personality’s favorite jewelry is likely to have this gem in it. Necklaces tend to be her favorite jewelry pieces. She will never be upset to get one as a gift, so long as it is tasteful, anyway.

The Taurus woman traits show she is steady, determined, and she does have a little temper that gets the best of her every now and again. Overall, she is a kind and loving woman, at least to the people who get on her good side. She makes a great friend, partner, and mother. All in all, she is a great person to get to know.