When Pisces woman is in a relationship with Cancer man, it is easy for them to reach a point, where they both feel comfortable and satisfied. Pisces woman Cancer man compatibility partners have excellent emotional compatibility. That is because both of them belong to the same element-water. Both of them will feel this instant connection from the time they meet. This couple understands each other on a very instinctive level. They take care and support each other, even without asking. On most occasions, they simply know what the other one wants. Both partners can be very flexible, and make this relationship perfect.

Usually, the communication in the Pisces woman Cancer man love compatibility is excellent. They have a lot to talk about. Both of these signs share an interest in the mystical things in life. They understand each other on a very intuitive level, and it is easy for them to communicate. Cancer is much more practical than Pisces. She sometimes gets too caught up in her dream world. In their Pisces woman Cancer man love communication, Pisces needs to learn to focus on more realistic things. Cancer will not tolerate endless chatting about nothing. He wants a real intellectual connection. If Pisces woman finds a way to be more constructive and follows her ideas, it will be easier for them both to communicate.

Cancer man is one of the best partners for Pisces woman because he understands her sensitive character. Cancer man will always act on his emotions. Pisces woman has a very complicated inner world. She is a sensitive person with a huge emotional world. She has a lot of negative emotions, but she tends to hide them. This quality can get in the way of many of her relationships because it is rare that someone can truly read her complex personality.

Cancer man is so intuitive and perceptive that it will be easy for him to see all parts of her complicated character. He will find the right approach to make Pisces feel safe. Once she does, she will open up to Cancer. Pisces woman will give Cancer a lot of tender care that he needs. The Pisces woman Cancer man couple can reach complete intimacy with each other.

The intimacy and emotional closeness they share is the basis of this relationship. Finding such deep connection is rare. Cancer man is very understanding. This man wants to create a happy home and family at any cost. Pisces can get scared of this idea because she has her image of the perfect Pisces woman Cancer man relationship. Fact is that Pisces doesn´t understand relationships so well and she is looking for something that is not likely to be real.

Cancer man has a more practical view. He is patient enough not to be overbearing with his willingness to commit. If Pisces woman gets too scared of the seriousness of their relationship, she will want to distance herself. She could start to tell some lies or hide something about herself from Cancer. The best part of their Pisces woman Cancer man love affair is that Cancer easily recognizes the feelings behind her action and doesn´t take much offense. They will build enough trust with each other to be able to talk about these issues and work through them.

Pisces woman Cancer man lovebirds have a powerful sexual attraction towards each other. Their emotional approach to sex will make things very easy for them. Pisces will surprise Cancer with her creativity and sensuality. She will always spice things up between them. Cancer will experience a lot of new things together with this woman. He provides the intimate feeling between them. Cancer is very romantic, and he will always create a loving and magical atmosphere. Their Pisces woman Cancer man sex life will be very satisfying. They have a lot of respect for each other, and they treat each other with a lot of sensitivity. 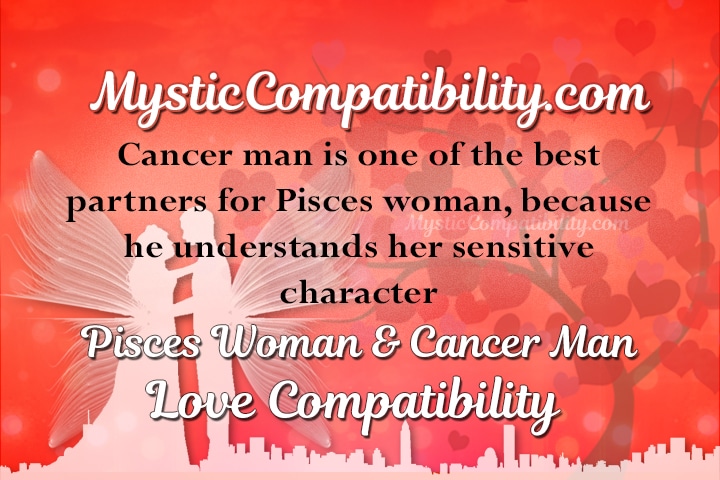 The Pisces woman Cancer man marriage relationship needs some basic rules. Both partners have to understand where they are going. They need to find out if they want to be committed to each other and if they are in this relationship for the long haul. Cancer man is very intuitive, but his way of thinking is more practical. He is a family man, and all his attention is dedicated to his loved ones. And he wants his partner to act the same way. Pisces woman divides her love between friends and family. Cancer man doesn´t understand that kind of attitude, and it will be hard for him to accept it.

Cancer man is very capricious. Even if there is a great connection between him and Pisces woman, there still might be some things he is not satisfied with. Cancer remembers his dislike towards something for a very long time. He can forgive, but he will never forget these things, and will constantly keep reminding Pisces about it. Although she can also be very capricious, Pisces woman easily gets over little misunderstandings. She doesn´t like to obsess about offenses towards her, even if they have been hurtful. She rather wants to forget about it. If Cancer man keeps reminding her of all the little things, she can get very frustrated. She knows when she has been wrong, but Cancer seems to forget all his wrongdoings.

Pisces woman will be surprised about the traditional nature of Cancer man. When they start their Pisces woman Cancer man sexual relationship, Cancer can be very dismissive towards Pisces ideas. He sometimes thinks she is a bit weird for her needs. Pisces woman should not reveal all her ideas straight away. She needs to pace herself. With enough time, Pisces can inspire Cancer to become more sexually open and let go of his shame.

The difference between them is that Cancer man values stability above else. Pisces, on the other hand, is looking for some emotional drama. She can get easily bored with the rigid attitude of Cancer. At the beginning of their Pisces woman Cancer man zodiac match they will have a lot of fun doing things together and exploring each other´s character. Later on, Cancer can get too comfortable and fall into a routine. That can easily scare of Pisces woman because she needs more excitement. This woman needs to feel like there is magic between her and Cancer. It is understandable that in real life everything can´t be exciting all the time. Still, Cancer needs to find a way to surprise this woman more and give her the emotional excitement she needs.

Pisces woman might find her happy fairy-tale ending together with Cancer man. As water signs, they are deeply connected to their emotional world. Pisces woman has a complicated character, but Cancer is one of the rare men who can truly understand her. She will not have to become someone else to be together with him. Cancer will create the perfect conditions for her to be just the way she is.

Cancer man wants stability and family above all else. He will work hard to please Pisces woman, not only because he wants to be together with someone, but because this Pisces woman Cancer man compatibility relationship is worth fighting for. It is easy for them to resolve any conflicts. The intimacy they share will make up for all their differences. When they find a balance between excitement and stability, they will have found a way to be together forever. 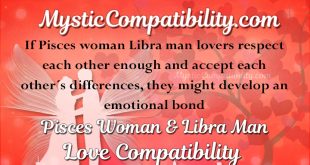