Married Woman and Flirting? What is Inappropriate?

Married Woman and Flirting? What is Inappropriate?

In general, both men and women flirt whether they are single or married. The question is are married couples significantly more disturbed by the situation than singles? Some would argue married couples have greater risks of it upsetting the marriage.

Do happily married women flirt? For some, it’s a real part of our everyday life. It becomes an issue when that handsome guy giving you goosebumps won’t let go of it. The feeling is heavenly, but your spouse won’t appreciate the thought of it, however, it all depends on your motive. As a wife flirting, you shouldn’t lust after anyone. Here are a few married woman flirting signs.

Married Woman and Flirting? Is it Okay?

Who is a flirt and what is flirting? A flirt is a person who participates in a provocative conversation, although it’s more so entertaining than purposeful. Flirting can be profoundly amusing to the opposite sex or same sex. With this in mind, what is inappropriate flirting when married? Some people flirt simply out of boredom.

Above all, flirting makes a married woman feel like she is still in the market and more beautiful than before. It causes her to feel alive, attractive and appreciated. The comment could be an unusual pickup line from one man, which triggers certain thoughts and for some women, those images will go haywire.

The Honeymoon Phase Comes and Goes

Sad to say this, but it’s the truth; the honeymoon phase will come to fade away. It’s not easy to turn on a marriage, but one which has been stagnant for a long time will put one partner in a vulnerable position. That’s why a married woman won’t deny that tiny gesture from another man.

At the same time, a wife will never forget how her husband used to tempt her with pleasure and passion. Even if she is not a flirting lady, she may turn into one just for attention. With that said, when a married woman flirts with an younger man or another married man, it could be because she’s missing it at home.

Why is a Married Woman in Love With You?

As soon as the wedding bells jitters wear off, old habits prevail and we start to take the relationship for granted. We get fixed into married life and we don’t put the other person first like we once did.

We must water our own lawns and use fertilizer when necessary. It’s hard work, but persistence pays off. Your marriage should be your priority. Although being married doesn’t blind us from noticing other people, a married woman should always stay true to her values and principles.

Flirt By Word and Not By Action

As a married woman flirting, you know men love for their women to seduce them. As you flirt with other men, consider your partner as your first and last. Don’t take it for granted when he comes home early to spend time with you.

Never mind if he is not into flirting. Maybe he doesn’t whisper in your ear anymore. It is not how much he flirts with you, but how he proves his love and devotion in other ways. He is caring and loving. Keep that in mind.

Take Care of the Wandering Eye

The beautiful ones are not yet born, so they said. Every once in a while, you’ll notice a man who looks like a god. Try to calm your nerves when you see this drop-dead gorgeous man. Of course, you’ll want to tell your girlfriends about him, but don’t go beyond talking. The best way to deal with the wandering eye is to remember to treat your husband as you want him to treat you.

Judge Your Partner’s Actions and Not Words

Some men don’t know how to flirt with a married woman or know that a married woman likes you. They go too far. It’s been my experience the wrong man will approach you at the right time. Normally, this is when your spouse isn’t around. But at the end of the day, all of his actions will speak louder than his words.

If your other half finds that a married woman and flirting disturbs him, check your behavior. Sure, you will not always do what’s right. To err is to be human, right? Of course, I’m right, but when your husband starts to feel like you don’t care at all, you should change the direction of his thinking and feeling. 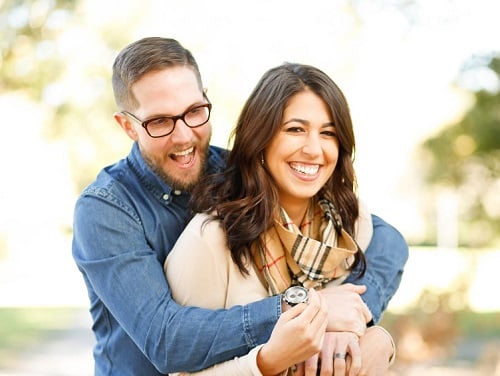 So, is to OK to flirt if you are married? Don’t choose a stranger over him for something as trivial as flirting. You never know what tomorrow holds and karma… well, you know what they say about her and that’s all I have to say about this. Good luck!