The Pisces man Capricorn woman compatibility bring out the best in each other. Their success is very much dependent on the timing of them meeting each other. Her natural organized skills will be a draw card for him. It’s relatively easy to see what attracts them to one another. When things are going well between them, they can absorb a lot from each other.

He will especially try hard to make a success of their rapport. She, in turn, will try and bring about some form of stability with his frenzied emotions. She has a calm steadiness that lures them to each other.

With her natural maternal instincts, she is continuously planning for what comes next. The Pisces man will always feel safe in her company. The Capricorn woman is a realist who lives purely for the here and now. The Pisces man prefers not to have to face reality.

He generally lives in a dream world with his emotions sometimes being out of control. He will impulsively feel safe that she has the ability to disentangle almost all of his problems. The Pisces man Capricorn woman couple have the ability to have a loving and caring relationship which is fuelled by their love and respect for one another.

The Capricorn woman is besotted by the temperate and spiritually charming Pisces man. When she discovers his seemingly lack of responsibility, impatience and irritation will set in. He will discover that at times she struggles to communicate how she is feeling.

It will result in him feeling that her inability to converse on how she is feelings is potentially cruel. In fact, the Capricorn woman can be quite stubborn, which is why she does not always reply to him. She will become sarcastic, and the respect within their relationship will start to wane.

When they are happy to industriously toil together, this association can last a lifetime. Once she feels secure within the Pisces man Capricorn woman love compatibility, taking care of some of the responsibilities to ensure success will follow. Mutually they are old souls; their relationship has the ability to withstand anything that comes their way. 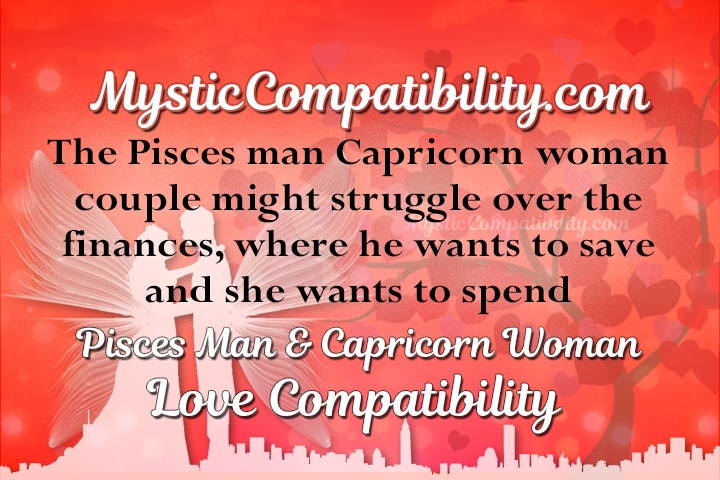 The Pisces man Capricorn woman compatibility can be problematic due to their emotional mismatch. When they are able to set clear boundaries at the beginning of their relationship, this connection can go the distance.

He will expend a lot of effort to try and bring some stability to his emotional state. The Pisces man Capricorn woman compatibility may prove just too intangible, in spite of their best efforts. At the end of the day, there does not seem to be much to sustain the relationship between them.

Passion for the Pisces man and Capricorn woman will be deep and meaningful. It stems from romance that is quintessential. His shy exterior makes for interesting engagement for her. When he starts to reciprocate, he is able to bring about a real romance to sweep her off her feet. There is a sensual bond between them. She will be taken in by his romantic streak and together they will make magic.

The Pisces man Capricorn woman sex is the epitome of eroticism. He is sensitive and intuitive whilst she has the aptitude to generate a tremendous sexually stimulating exchange for them. She has an active imagination and will bring that to their union. With his love of fantasy play, he will have found a willing partner to discover all their carnal desires.

The Pisces man Capricorn woman marriage will be particularly good for raising children. They will discover a profound and expressive connection that binds them for life. There is the propensity for them to generate a wonderful degree of relaxation and sanctuary in a warm and comforting home.

The Pisces man Capricorn woman couple might struggle over the finances, where he wants to save, and she wants to spend. The Pisces man wants a partner who can appreciate and share his emotional depths. The Capricorn woman will avoid them and pretend that they don’t exist. There is a lack of inspiration from her side for him to get up and pay heed to his responsibilities.

The Pisces man Capricorn woman in love will discover a tenderness that goes the distance for them. They are able to engage in interesting conversations about a sphere of different topics. Together they will be able to realize a spot-on system of affection and empathy. She will discover that he has a wonderful aptitude to understanding situations and envisaging their consequences.

The Capricorn woman is attracted to the emotional Pisces man and enchanted by her kind and charming nature. She has a survival instinct that will bring balance to their union. With his ability to understand scenarios and an inherent need to help others, this will be a successful courtship.

The Pisces man can often read people easily with his extensive emotional depth. The Capricorn woman will discover his kind heart and intuitive qualities. She does not give up information that easily, and presents a challenge for him. He will find her to be extremely cautious when meeting new people, but with his patience, he will give her all the time that she needs.

The Pisces man can be a bit of a workhorse. He will find it problematic to detach himself from his work in order to uphold a composed way of life.The Capricorn woman wants to build a stable life, and she generally responds to evidence instead of instinct. His fluctuating moods can be very unbalanced. She will find him to be unreasonable and unbalanced and just too much hard work.

The Capricorn woman has a methodical approach will come across a bit cold. He can be a bit mysterious and secretive. To sustain a Pisces man Capricorn woman relationship they will need to make serious changes to their natural behavior. He will need to go out and get a job or become impervious to her constant nagging for him to get a life.

The Pisces man will find it difficult to include the Capricorn woman in his fantasy world. She will have to find herself more in the moment to connect with him. Her detached manner may be a turn off to him. He will have to get his head out of the clouds and back on earth with her if he wants to keep her interested. He will put plenty of effort into keeping her happy.

When a Pisces man wants to get the attention of a Capricorn woman, he can display his need for assistance. Her natural savior complex will result in her coming to his rescue. His insecurities will definitely get her attention. Once he has her at his side, he can bring his romantic side to the fore.

When a Capricorn woman wants to attract a Pisces man, she can let her maternal instincts get his attention. He will be drawn to her proficiency abilities. Once she has his attention, she can attempt him to help him solve an issue that he has been struggling with.

The Pisces man Capricorn woman compatibility relationship is over when the Capricorn woman chooses to end it. It will not be an easy decision for her, but confident that it I the right way to go.