Marriage is a big decision that many people around the world are happy to make, but it’s still life-changing. Too many people make this decision lightly which results in a lot of unhappiness. Marriage is intended to be a lifelong commitment between partners, and even if there are many people who desire this commitment, many of them are even too afraid to actually get to that point!

Because of all of the negative things that can occur in a marriage, people have a lot of fears about marriage. But, there are ways to conquer those fears, especially if one still desires that kind of union! Let’s take a look at 10 common marriage fears and how to get over them.

Infidelity is a huge fear, and that’s why it’s number one on the list. Some people have open relationships where they allow each other to have outside sexual experiences or shared sexual experiences with others, but this fear relates to those who appreciate a relationship between two people that stays within two people. This is a big fear because it puts the other person into a vulnerable situation. It makes them feel weak and undesirable and that their partner doesn’t really care about them. Test your sexual compatibility.

But, a great way to conquer this fear is to simply make sure to know one’s partner well before the marriage. Spend time with them in all kinds of situations and discuss the topic of infidelity with them. Get to understand how they feel about this topic, and learn how they would handle temptations that will come along.

But, also, the future is unknown for us all. Learn to go into the marriage with the best of hope, but one must accept that there is no way to know what one’s partner will do or what the future holds. That is probably the best way to conquer this fear.

This occurrence may be highly unusual, but it does happen. Again, though, this fear can be conquered simply by getting to know one’s partner and their environment, their upbringing, and their other close relationships. It’s also another situation where one must learn to accept that the future is unknown, and we must go into a marriage relationship with hope for the best possible outcome.

#3. Your Spouse Will Change

This is a difficult one, but it’s something that is normal. Hopefully one’s partner doesn’t change to a completely different person, but the thing about marriage is that people do change. They grow, and they adjust, and two partners have to learn to grow together to keep the marriage alive. It will be difficult, without doubt, but it’s important to remember that everyone changes. If the spouse changes into a completely different person, it probably means that the two people didn’t know each other well enough before the marriage occurred.

This is a definitely probable occurrence. Learn to accept that this may happen, but in order to help potentially prevent this, make sure before the marriage to encourage good relations between in-laws. Have them spend time together in positive situations, and establish a trust and a communication between them. With that good foundation, it can help when tensions arise between families in the future.

Sometimes, people are afraid that they will regret this decision later. Like, maybe they’ll meet someone new that they like better and will feel torn in their own relationships. But, if one is having this fear, then that probably means they either don’t understand marriage very well, or they don’t actually love their partner, or they’re not quite ready for marriage, and they want to keep searching around. Be sure to analyze this fear before heading into a marriage to decide where it’s really coming from… 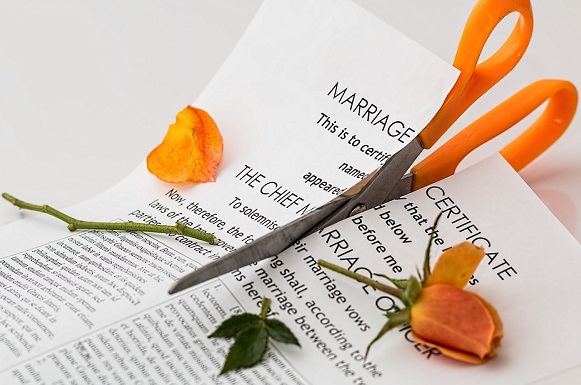 This is scary for a lot of people. Commitment is such a loaded word. It can sometimes feel like a space of no escape, which scares many people away. But perhaps think of this word in a more positive light. Think of the other person who is also choosing to commit. Commitment can be a beautiful thing. It means two people who are deciding to love each other and be by each others’ sides for the rest of their lives. That’s not a negative thing. But, if one is scared of committing to a particular person, that may mean they’re not ready to take the next step with that person either.

This is a very common fear, and no wonder, because it happens so often. In order to conquer this fear, realize this: This will happen in a marriage if both people don’t try to keep things alive. That means, spending time together, learning to be kind to and patient with one another, and also to continue to include each other in one another’s lives.

Take the time to talk about the day. Go on vacation together (without kids). Have sex! Share with each other about interests and hobbies. This way it will help two growing and changing people to continuously intertwine their lives and keep their relationship healthy.

Yes, this can happen for those who let it happen. And, it’s a totally common fear! But, in order to prevent this from happening, each person should continue to have their own lives! Go and do things separate from the other person such as exercise and other hobbies. Have friends outside of the marriage, so that one’s whole life isn’t about their partner, and so that there are parts of one’s life that doesn’t include their partner. It’s healthy, and it will prevent this “loss of oneself” feeling from happening. It’s two independent people who are together in a marriage.

This is a similar fear, but it stems from the knowledge that married partners often make decisions together, especially about financial matters, family matters, and political/religious matters. This is also why it’s good to get to know one’s partner well before the marriage, and also to marry someone who is similar in important matters, so that there’s not more than the usual amount of tension. Also, marriage is a united entity, so there is some loss of independence, but it doesn’t have to be as bad as some people fear it is.

Yes, this happens. And it can happen for a variety of reasons, and can sometimes be a shock to the other person! But, in order to help prevent this from happening, get to know the person well beforehand; be sure they’re the right person to commit to, and be sure that each person is ready for marriage! But other than that, no one can know what the future holds. Accept that!

Because of the magnitude of marriage’s importance, there are a lot fears connected to it. All of these fears are totally understandable, but there are ways to try and conquer these fears and to help prevent potential negative problems. But, it’s important to note that not every problem can be solved! Accept the facts: marriage will be tough, and the people have to work at it in order for it to succeed! Again, no one knows the future, but hope for the best and overcome your fears in marriage!