The Capricorn man Scorpio woman compatibility are reciprocally attentive and unwavering in their stance. Their attraction will be compelling, and initially not really obvious to anyone else. He is the more reserved one that would prefer to be off to one side. While she will generally be found in the limelight, where she loves to be.

The confident Capricorn man is instinctively domineering and she might not yield so easily to his demands. Loyalty is a key prerequisite for them and neither is negotiable on honesty, confidence and fidelity. When they mutually focus on their careers, their Capricorn man Scorpio woman relationship will fare much better. A comfortable home life is what they equally strive for; together they will create a safe and trusting have for their love to blossom. When faced with issues, they challenge impediments until they achieve an optimistic outcome.

The Capricorn man is in search of a partner that is material secure. He likes to save his money and wants a partner that won’t rely on him to provide the monetary requirements within their relationship. The Scorpio woman wants an emotionally stable partner to share her life with. Compromise is the only place where they might fall short. Consequently, when either of them does not want to try and repair things after a disagreement, cracks in their perfect relationship could start to appear. Neither of them will want the other to tell them what to do. She will try to manipulate him so that she can get her own way. On the other hand, he will merely try and take control. When they are able to get passed these basic personality differences, they can have a financial and emotionally stable home environment.

The deeply expressive Scorpio woman will find that the Capricorn man can be quite aloof and too meticulous for her fancy. He will be surprised by her emotional volatility and won’t share her complex sentimentality. In return his responses will be controlled and without emotion. When she lashes out, he will simply walk away and refuse to deal with her.

Capricorn man Scorpio woman compatibility will fall short from an emotional stand point. Should they be really busy with many different interests, they stand a chance of having a successful relationship. Should their connection start on a sexual level, they could meander along for a while. With hectic social lives and frequent sexual encounters, there can be a propensity that this relationship will go the distance.

Romance for the Capricorn man Scorpio woman in love is sadly lacking. Neither of them is rather interested in wasting time on such frivolous undertakings. They will without fail discover far more interesting endeavors to keep themselves captivated. This does not mean that there will not be enough desire between them to create a wonderful Capricorn man Scorpio woman connection. Foreplay will form part of the process to establishing a really successful relationship.

Passion for the Capricorn man Scorpio woman couple will not be from a physical perspective. His stable outlook will create a stable platform for the emotional Scorpio woman to connect with her overflowing sentimentality. They have the possibility of having a really firm and intimate bond between them. She won’t hold back from being the physical aggressor in their sexual connection. He will not be offended by her taking charge in their passionate interactions. Exploration of sexual options will be forthcoming, once he begins to feel more confident with her responses to their love making.

Capricorn man Scorpio woman sex will be with two very like-minded individuals.When they come together, only they will understand what is really going on between them. Their intimate sex life will be a very reserved and fervent matter. They will take each other to salacious levels of enjoyment. When they finally take things into the bedroom, there will be role play of compliance and domination. He will attempt to get her to succumb under his control. She will seem to be resistant to his advances, when in fact she relishes under them instead.

Furthermore, Capricorn man Scorpio woman marriage will create a warm and an inviting home for them to raise their children. They will share a mutual expectation that marriage is on the cards when things become physical between them. As long as they stay committed to each other, they have a good chance of making a go of things. Equally, they face their financial future on the same footing, ready to face the world head on. As parents they will need to put regulations in place on who will be taking care of the children. Should they not, they will fall short of helping each other when they need it most. 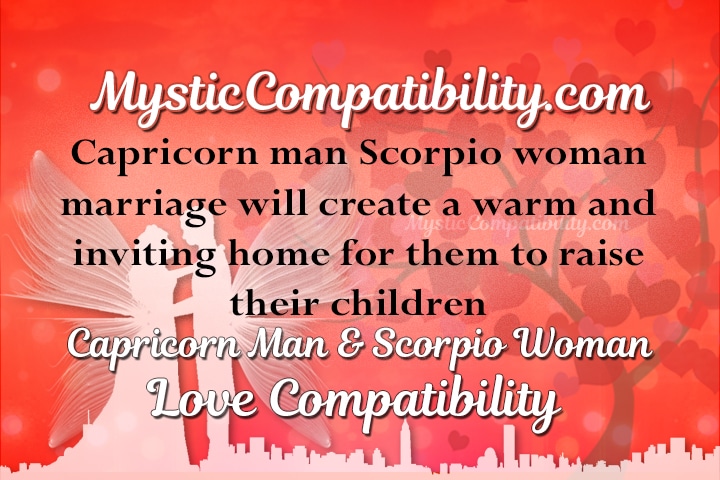 There is mutual respect between the Capricorn man Scorpio woman soulmates. They will discover a genuine connection between them which they are unafraid to display for all to see. Their personalities share an honesty and lack of capriciousness. When it comes to career aspirations, they will be supportive to each other all the way. When arguments arise, they are tenacious to resolve disagreements to ensure a successful Capricorn man Scorpio woman bond. They will spend much time sharing matters that are important in their respective lives.

The Capricorn man will be enchanted by the Scorpio woman. Her intrigue and mystery is what draws him in. He does not demand that she follows his decisions, which she would not do even if he did. When they are required to make a decision, they will come together with his dependability and her responsiveness to bring things to fruition. This couple will find it easy to create amusing jokes between them.

The controlling Capricorn man will knock heads with the energetic and principled Scorpio woman. She certainly will not want to just hand control over to him, which could lead to heated arguments. He will certainly see her stubborn nature come to the fore.

When a Capricorn man wants to get the attention of a Scorpio woman, he can hold back from revealing all straight away. Should he manage to catch her eye, she will be attracted to his seemingly mysterious persona. She will want to know what he is hiding under his strong exterior which will peak her interest. Once she has engaged with him, he will have to find ways to keep her interested, but not by trying to change or control her in any way.

For Capricorn man Scorpio woman affair to work, she can let loose a little. With his somewhat staid personality, he will be drawn to the wild-child. He will want to have some of her excitement as part of his sometimes mundane life.

Capricorn man Scorpio woman compatibility is over when they start to argue about anything and everything. When they break up it will be unforgiving. Mutually they will walk away and refuse to have anything more to do with each other.