The Scorpio woman is usually born between October 21st through November 20th. Scorpio women are intelligent, creative, and sensitive in both emotional matters and when it comes to her strong sense of intuition. She always seems to know when something is wrong or right before it happens. She can sometimes be a bit emotional at times, but she still has the smarts that she needs to weigh her decisions with both emotion and logic before she makes her final choice on something.

The Scorpio woman uses her creativity to get into many new opportunities in life. Her creative path in life will lead her to making new friends, getting jobs, finding new hobbies, and doing many other things in life. The Scorpio woman traits makes her a one of a kind woman. Anyone who gets to know a Scorpio woman in the right way will have a great friendship, and anyone who hurts a Scorpio female will grow to regret it.

Scorpio women are romantics, and they will only be happy if they are with someone who is equally or more romantic than they are. She will become bored in relationships easily if she is with someone who has no imagination. Another thing the Scorpio lady needs in a partner is the trait of being able to talk about their feelings with each other. She will not be happy with someone who is secretive, which is strange because she can be secretive at times herself.

The Scorpio woman in love is loyal, most of the time. She will be loyal to anyone who she is certain is being loyal to her. She may flirt with others if she is bored in a relationship, but she is not likely to cheat unless she feels as though she cannot trust her partner. Without trust, a relationship with a Scorpio woman will not last.

When it comes to being in the bedroom, Scorpio women like to keep things sexually creative. She loves to try new things, play out different fantasies, and even have sex in new places. She will want to be with someone who is as sexually adventurous as she is. However, the Scorpio female can also keep things tame if she is with someone who does not want to do anything too crazy.

The Scorpio woman personality is intelligent and sensitive. She will be happiest when she is working in a career she can be creative with, She doesn’t need to have a creative job to be happy, though. She wants to be able to make a difference in the world in some way. It does not matter how she makes a difference. She will be happy being anything from a top-rated doctor to a volunteer charity worker. So long as she is making a difference in the world, in a small way or in a big way, the Scorpio lady will love her job. 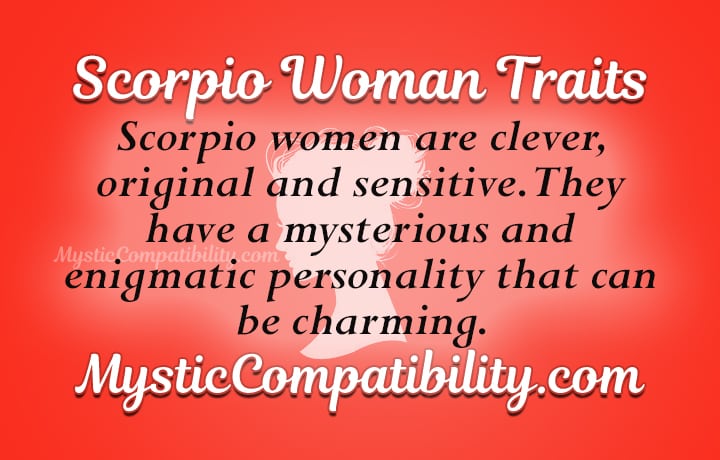 Scorpio woman personality traits suggest she uses money when she needs to and saves it when she can. She is a moderate when it comes to budgeting. She does not like to splurge on items often. She wants to use her money to do some good in the world. But, she does sometimes treat herself by buying items that she can use in her hobbies. She is responsible with money most of the time. But at other times the Scorpio female will waste money like there is no tomorrow. It all depends on her mood and impulse control.

Scorpio woman characteristics suggest they are intuitive and sensitive. This can help them to avoid dangerous situations that could easily cause other sign’s harm. However, always being on the lookout for trouble can wear out a Scorpio woman both mentally and emotionally. This can sometimes cause stress-related health problems.

The ruling body parts of a Scorpio woman are her genitals. Her genitals are likely to be more sensitive than the genitals of other women. This can make sex more pleasurable for her when it is done right. However, she may experience more pain during sex if she is with someone who is not tender with her.

Scorpio women make great friends, but they are not friends with everyone who they meet. She can be selective about the people who she chooses to be friends with. She can become interested in other subjects easily. So she can become friends with people who do not share her interests. What she looks for in a friend is someone who can be loyal to her. The Scorpio personality traits suggest that she wants a friend who can stand by her side through thick and thin. If she is friends with someone who can do this for her, then she will easily be able to be there for a friend in need.

Anyone who gets on a Scorpio woman’s bad side is in for a world of trouble. A Scorpio female will hold a grudge against someone who hurts her. Anyone who does this will like to regret it.

Scorpio women care about their family members above all other people in their lives. She loves to stay near her family in her younger years. She has a strong sense of loyalty to her family. She will never do anything to hurt them on purpose. She wants to stay with her family to help in any way that she can. She doesn’t see her family as holding her back. Instead, she sees herself encouraging her family to be all they can be.

The Scorpio woman traits suggest that she does not have a set fashion look. She varies her look based on the trends, the time of year, and her mood for the day. Sometimes she may dress strangely when she is trying out something new. She does know how to dress for certain events. So she is sure to look professional at work, classy during dates, and casual  when she is at home.

The Scorpio woman’s stone is topaz. Because of this, she is likely to admire jewelry made of this stone. She does not need extremely expensive jewelry to be happy. All types of jewelry make great presents for the Scorpio woman. The more creative the piece looks, the more she will like it.

The Scorpio woman is a thing of mystery, which could be why getting to know her is so worthwhile. Anyone who knows a Scorpio woman well is in for a great time!