The Capricorn man is usually born between December 22nd through January 19th. In some years, like leap years, the beginning and end dates for this and all signs can change slightly. If a man is born near the 22nd or 19th, he should double check the Capricorn zodiac sign dates for the year he was born in to make sure that he really is a Capricorn, and not a Sagittarius or and Aquarius.

The Capricorn man is quiet and reserved towards the people who he doesn’t know well. But once he opens up, it is clear how great he really is. This man is intelligent and creative, even if he isn’t all that social. He loves to spend his time studying, making art, and watching movies. He tries to be practical in most areas of his life, but that doesn’t mean he is boring. There is a spark to the Capricorn man that only his closest and luckiest friends get the pleasure of seeing.

The Capricorn man personality traits show that he doesn’t warm up to people right away. Thus, it can take him a while to feel comfortable in a romantic relationship. Once he warms up to his partner, he will become more open about his feelings. When this happens, he is bound to become more romantic. One of the great things about a Capricorn man is that he is entirely loyal. He will never cheat on a partner, but he will likely break up with a partner if he is cheated on.

The Capricorn male doesn’t have sex with just anyone. He prefers to be in love before he has sex, but at the very least he needs to be able to trust his partner before he has sex. When in bed, he is not crazy, but he is good. He likes to find something that he is good at, and then he keeps doing it. Some Capricorn men have kinks that they may want to try out. However, they are not likely to want to do everything their partner likes. He makes up for his by being romantic and passionate.

When working, the Capricorn man traits show that he likes to be able to use his creativity. He likes to be able to think about something important while working. He is an intelligent man, and he doesn’t want that part of himself to go to waste. He does not care much if he works alone or with a team of people, so long as the team is made up of intelligent people like himself. The Capricorn male will do well as a writer, doctor, teacher, artist, businessman, accountant, historian, or anything else that will use his intelligence well. 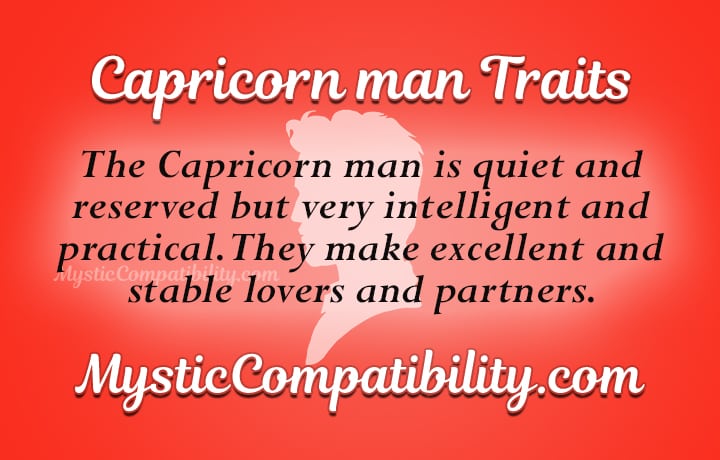 The Capricorn man personality thinks about money in a practical way. He does not care for saving up money just to say that he has money saved up. Instead, he is likely to save a little money, enough for an emergency, and spend the rest as he gets it. This does not mean that he is a frivolous spender. Instead, he pays off his bills first, other necessities next, possibly some home repairs or investments after that, and lastly he will spend his money on things for himself like snacks, books, clothing, or electronics.

The Capricorn guy knows the importance of living a healthy lifestyle. He makes the time to exercise, and he’s not afraid to go on a diet if he has to. Because of these things, he is usually in pretty good shape, physically. However,  Capricorn men have a tendency to worry about things more than they need to. This can cause him to become stressed out. If he becomes too stressed out, then it could lead to further health complications, both mental and physical.

The Capricorn man’s ruling body part is the knees. Because of this reason, he will have strong knees when he is young. He is not likely to complain about knee pain, which may cause him to put more pressure on his knees than the other zodiac signs would. If he continues this for his whole life, then he is likely to begin complaining about knee pain in his middle and old age.

The Capricorn man personality traits show that he likes to keep to himself. If anyone wants to make friends with him, they are going to need to make the first introduction. He takes a while to open up to people. But once he does, he is someone who friends can turn to for a good time. Once he does make a friend, even if it does take a long time, he is likely to be friends with that person for life. He is a highly loyal friend who others can depend on.

He is not into crazy parties or anything like that. When the Capricorn man does hang out with his friends, he is more likely to want to go to a coffee shop than a club. He likes to watch movies at home instead of going out to do something. He is a relaxed guy, and he will be the happiest when he is with friends who can be as relaxed as he is.

As a young boy, Capricorn children are often quiet, but curious about every little thing that they see. How a Capricorn boy’s family responds to his creativity will play a big part in determining how well he gets along with his family as he becomes a man. A Capricorn man with a good childhood is likely to come back home to visit his family often. A Capricorn male who had a poor childhood is much more likely to move on and never come back. All in all, he only treats his family members as they treat him.

The Capricorn man characteristics show that he likes to keep things simple, but also classy. He is likely to stick to dark colors so that he does not stand out. Earth tones, like green and brown, are likely to catch his eye. He does not keep much of an eye on what clothing is trending. But at the same time, he will avoid wearing clothing that he knows are out of style. He will occasionally wear jeans and T-shirts, especially when he is young. But as he ages, he will also class things up. It is not uncommon to see a Capricorn man wearing slacks and a button-down shirt just because he needs to go to the grocery store.

The Capricorn man does like to add a bit of bling to his wardrobe, but he doesn’t want to spend a lot of money to do this. He is likely to have a couple of expensive pieces that he wears all of the time, like a watch or a ring. But the rest of his jewelry is just likely to look expensive, but actually be fairly cheap. He loves to get jewelry as gifts, though, which is something for friends and romantic partners to keep in mind.