Perhaps you have been wondering whether your Capricorn Pisces compatibility match stands a chance of succeeding. Well, if this is the case, you ought to smile considering the fact that Capricorn and Pisces are ruled over by complementary elements. The Earth rules Capricorn whereas a water sign rules Pisces. These two are complementary elements. This means that these Capricorn Pisces soulmates have a good chance of making their relationship work. Find your Juno soulmate sign.

This couple will create a harmonious relationship thanks to the compatibility ratings that they share. Yes, there would be a few minor hiccups here and there, but the end would be blissful for Capricorn and Pisces relationship. A closer look into the advantages and disadvantages facing Capricorn Pisces in love would reveal whether indeed the couple is meant for each other.

Assuming that Pisces is the woman and that Capricorn is the man in this relationship, there would be a sense of spirituality that this love affair would have. Why is this the case? Certainly, Pisces woman is famous for being the spiritual lady in the zodiac circle. They have a powerful effect on the love affair in Capricorn Pisces Love Compatibility. Capricorn would be benefiting from this personal attribute. Pisces will find a way of giving them advice on what they should do to be successful in life. With the spiritual power that Capricorn dating Pisces would have, there is a minimal chance of it failing.

The personal attributes that Capricorn and Pisces friendship has are simply ideal to make any love affair succeed. On Pisces end, this is a lover that would sacrifice anything for their counterparts. This means that they would stop at nothing to make certain that their love blossoms. Capricorn is an earth sign. They would be bringing their cardinal nature into this love affair.

One of their major strengths is being a responsible individual. They would help Pisces in living a responsible life with a sense of direction. Ultimately, Capricorn Pisces Compatibility would reach the end of the tunnel, thanks to their individual efforts that they bring into the love affair.

In addition to the above, the variation in personal attributes in this couple will have a balancing effect on their love affair. Capricorn is a practical individual and would only want to live a real life. This means that there is no room for fantasy in the relationship that they would share with Pisces. The good thing is that Capricorn will have something to expect from the Pisces partner. This partner will have an effect of bringing in romance with Capricorn Pisces in bed. Consequently, the aspect of giving and taking in any love affair is well evidenced in Capricorn Pisces Compatibility.

One tricky aspect of Capricorn Pisces marriage is that both partners will tend to feel insecure. Capricorn seeks for a stable relationship while Pisces wants a love affair that is emotionally strong. This could have an effect of leaving the partners feeling insecure of what the future could hold for them. The good news is that Capricorn Pisces compatibility will hold each other’s hands in times of need. Therefore, with encouragements and compromise that they would be getting from each other, this love affair is on a good run.

Communication would be great in Capricorn and Pisces compatibility. First, this will attributed to the fact that both lovers appreciate the need for communication in a good love affair. This will constantly strengthen the strong bond that they already have. Partners will sit down and listen to what the other has to say. Mutual respect and understanding is what they gain when this happens. Ultimately, Capricorn will know his/her Pisces lover in ways that no one else could explain. The same case applies to the Pisces lover. Test your moon sign compatibility.

Capricorn Pisces couple will be happy that they can trust each other in this relationship. This is linked to the mutual respect and understanding that they have for each other. Both partners will find no reason to be dishonest. Love is what guides them to reach the green light at the end of the tunnel. Thus, they would not allow petty issues to stand in their way.

On the dark side of this love affair, there are a few things that could hinder Capricorn Pisces compatibility from being happy always. For example, the realistic way of life of Capricorn could irritate the Pisces lover. Capricorn could argue that buying a car will aid in improving their social status in the society out there. They would argue out their decisions based on facts. 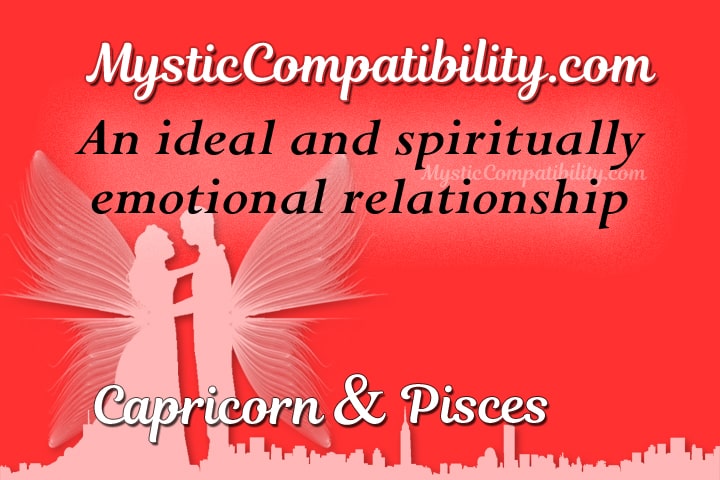 Well, Pisces partner will not concur to this. They would argue out that there are other important things that need to be sorted before buying that car. Hence, this couple could be at constant loggerheads over how decisions should be made which may lead to Capricorn Pisces break up.

In relation to the above, Capricorn Pisces Love Compatibility will certainly be influenced negatively by material things. Pisces is a spiritual being. This implies that money is not of any priority to them. Material things belong to this world. This is a notion they would have in mind. Therefore, expect them not be in favor of buying expensive jewellery. Capricorn and Pisces sexuality will get into conflict when money issues are placed on the table.

The helpful nature of Pisces lover will get Capricorn worked up. The water sign simply wants to change the entire word. This lover will go to the extent of helping those people that could be taking advantage of their caring nature. Capricorn will constantly get pissed off that Pisces does not notice when other people simply want to take advantage of them. Conflicts will thus arise as a result of this in Capricorn Pisces compatibility. Know more about couple sleeping positions.

Capricorn Pisces Compatibility has a great chance of making it to the end. This couple should simply work on a few hiccups that face them. Compromise and understanding are some of the attributes that they ought to adopt in their love affair. This will give Capricorn Pisces marriage compatibility a chance to flourish. Additionally, this couple should concentrate on the good side of their love affair. This will push away any form of negativity that could stand in the way of their relationship succeeding.

With the shared need to find love in this relationship, both Capricorn and Pisces have a good chance of smiling once they achieve their life’s goals. Falling in love with each other could be the best thing that ever happened to them. Compatibility depends mostly on what Capricorn and Pisces find as ideal in each other. For example, Capricorn could look at Pisces and be happy that they bring romance into the relationship.

Equally, Pisces would be happy with the notion that Capricorn has the effect of making their relationship stable and focused. Certainly, this is what is needed for any love affair to flourish. Lovers in this Capricorn Pisces compatibility should appreciate each other keeping in mind that it takes two to tangle. Moreover, balance is what they bring when there is a difference in their personal attributes.