The Pisces woman is usually born between February 19th through March 20th.  She has an imagination like no other zodiac sign. She is sensitive, both emotionally and with her intuition. She seems to be able to sense things that are invisible to others. These things can be anything from emotions to the supernatural.

All of these personality traits make the Pisces woman come off as dreamy. She always seems to have her head in the clouds. When she does come back down to Earth, she is sure to share interesting conversation with her friends. The Pisces female is an interesting person to meet, and anyone who does meet her is sure to be pleased with it.

The Pisces woman is one of the most romantic star signs there are. She is always planning one romantic date or another. She wants to give her partner her complete attention, so she is sure to always be loyal to her partner. She will be heartbroken if her partner cheats on her. That is just something that she can ever forgive a person for, even if they are as dreamy as she is.

Pisces women love to have sex, but they see it more as a fun addition to a relationship, rather than a requirement for one. She does not need to be in love to want to have sex, but she is likely to be more open to trying new things when she is in love. She is kinkier than some of the other sun signs since she is highly imaginative.

The Pisces woman in bed is likely to think of new things to try with her partner all of the time. She will want to be with someone who is as open minded when it comes to sex as she is. But she is okay with being a little tamer if her partner is uncomfortable with trying new things.

The Pisces woman traits show that she is a dreamer. But she doesn’t dream about having a corporate lifestyle. She wants to have a career in which she can be creative and has some freedom to do what she wants to do. She doesn’t want to answer to a boss. However, when she is younger and still learning about herself, she is likely to try out many jobs to see which ones fit her the best. Eventually, the Pisces female is likely to work for herself instead of for someone else. She will likely go into the arts or music to pursue her passions. 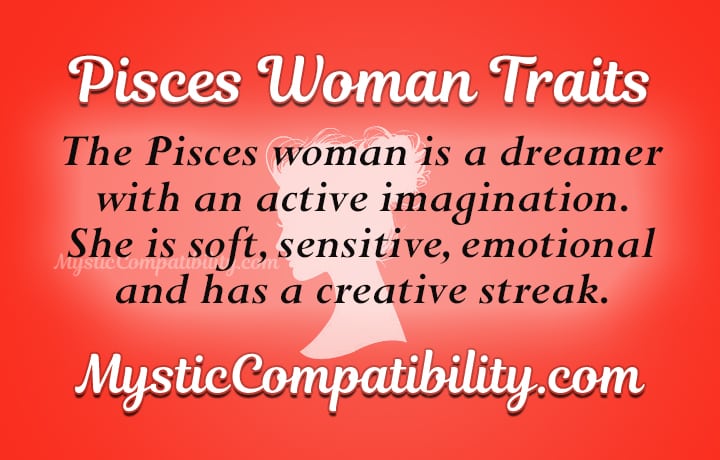 Since the Pisces woman personality is not too concerned about working in a professional setting, she is not bothered by how much money she makes…which usually isn’t much. She is not great with the money she has, either. She is likely to save up some money for a rainy day or for an emergency. But for the most part, she will spend the money as soon as she gets it. This does not necessarily mean that she spends all her money on things that she doesn’t mean. Instead, she is more likely to live paycheck to paycheck instead of saving up for something big.

Pisces woman traits shows that they live life on their own terms. They love the independence this gives them, but their body doesn’t always thank them for what they use their independence for. She loves the sweeter things in life, especially the sweeter foods in life. She also tends to drink more than some of the other zodiac signs. All of these things can cause her to gain weight. She is not a fan of exercising, so it can sometimes be hard for her to shed the extra pounds she puts on. However, the Pisces female does love to swim. If she goes to a gym with a pool she will have a much better chance of losing weight.

The ruling body part for the Pisces woman is her feet. She tends to have beautiful feet, and she loves to wear shoes that help her show them off. However, she is likely to complain of sore feet more than some of the other sun signs.

Pisces women seem to make many friends wherever she goes. The Pisces woman characteristics show that her easy-going attitude makes it easy for her to get along with just about anyone. She is not one to discriminate based on race, religion, or anything else. She does her best not to judge because she is aware that she is a bit eccentric, and she doesn’t want others to judge her.

The Pisces woman has a few of close friends, but she mostly has friends who she hangs out with every once in a while, but who she doesn’t share her deepest secrets or desires with. She will spend more time with her friends who she trusts enough to share all of her secrets with. She likes to have a good time with all of her friends, no matter how close she is to them.

The Pisces lady doesn’t like to be bogged down with bad news and she doesn’t care for gossip. All she really cares about is fun and honesty between friends. However, she will be equally loyal to each group of friends. She believes that loyalty is an important part of a good friendship. She will never betray one of her friends. And, she will have a hard time forgiving someone who betrays her.

Even from a young age, the Pisces woman personality always makes sure to keep her family in mind when she makes big decisions. She loves her independence, and will not compromise it even for her family, but she still respects them enough to run her ideas past them before she goes through with them. She likes to try to keep her family as happy as possible. She loves going on day trips with her family, but she is not likely to live at home, or even near home, forever. She is likely to travel often, but she will always keep her home in the back of her mind.

If a Pisces woman becomes a mother, her children are sure to have strange childhoods, but good ones. She will give her children more freedom than other kids their age are likely to have. She wants her children to grow up to be creative and imaginative, which could cause them to take more time to mentally grow up overall. The Pisces mom is sure to give her children a lot of attention and love, so they never need to feel alone. She is likely to be their first best friend.

The Pisces woman personality traits show that she prides herself on being creative. She will always wear outfits that help her to stand out from the crowd. This doesn’t mean that she will wear crazy outfits. But she will always wear something that fits her unique tastes. Loose fitting clothing and light fabrics will capture her attention. Pisces’s colors are blue and green, so she is most likely to want to wear clothes that are these colors, but she is sure to incorporate other colors into her wardrobe.

Pisces women like to get creative with their jewelry and other accessories, as she is likely to make many of them herself. She believes that this adds a personal touch to them. One of her favorite stones to use when making jewelry is aquamarine. She is not afraid to wear types of jewelry that others might consider strange, like ankle bracelets and toe rings.

The Pisces woman is one of a kind. No other zodiac sign can compare to her imaginative personality and easygoing friendly traits. She is a wonderful person to know and an even better person to get to know on a deep level.