The Pisces man is born between February 20th through March 20th. However, the beginning and end zodiac dates can sometimes change based on what year it is. If a man is born on either the beginning or end date of this sign, then he should check the Pisces dates for the year he was born in, to know if he is really a Pisces man, or an Aquarius or Aries instead.

The Pisces man is a natural dreamer. He always seems to have his heads up in the clouds. He is imaginative and creative, which helps him to make works of art and to see beauty in everything. This positive Pisces man personality draws new friends towards him constantly. Anyone who is friends with a Pisces male is sure to be better off for knowing him.

The Pisces man is one of the most romantic men out of all of the zodiac signs. His creativity has him constantly thinking of great new date ideas that are sure to thrill his partner. He is a passionate man, no matter what type of romantic relationship he is in. He is likely to have a fair mix of both flings and long-term committed relationships. Being the romantic that he is, the Pisces guy aims for long-term relationships most of the time. But it doesn’t always pan out the way he would like it to. He needs to be with someone who is creative, loyal, and just as fun as he is if things are going to work out.

The Pisces man is passionate in bed. He likes to have sex the most when he is falling in love, but he doesn’t necessarily need to be in love to have sex. It usually does not take very long for the Pisces man to fall in love, anyway. When in bed, the Pisces man cares more about pleasing his partner than pleasing himself. He likes to shake things up as often as possible. He has many fantasies that he will like to play out with his partner, he is also likely to have more than his fair share of kinks. The Pisces guy will need someone as creative as him, or at least someone who is open minded, for him to have a great sex life.

The Pisces man traits show that he needs to work somewhere where he has the freedom to be himself. He needs to work in a place where he can use his artistic skills often. For this reason, he will either need to work at a place that can give him all of the creative freedom in the world or he will need to work for himself. Being an author, artist, or business owner are all perfect jobs for the Pisces man. 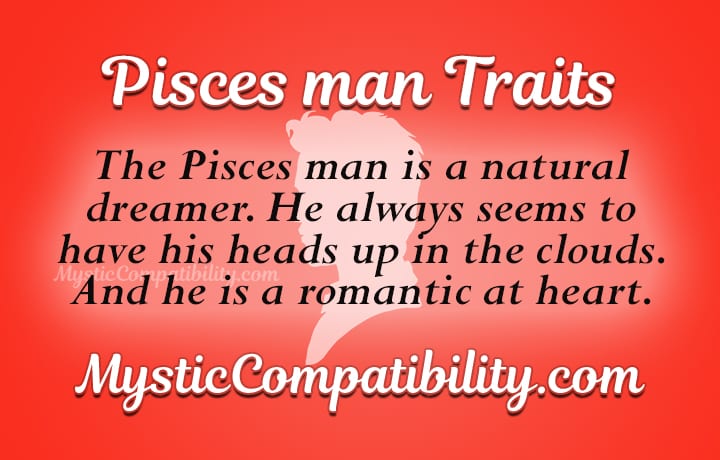 The Pisces man personality traits predicts that he doesn’t care much for money or the materialistic things he can buy with it. For the most part, the Pisces man just uses his cash to pay the bills, buy himself some tasty food, and to fund his art projects. After that, he will likely spend his money on more food than he needs or little indulgences that build up over time. He probably does not know that he is bad with money, but his bank account sure does, as it is almost always nearly close to empty.

When a Pisces man likes to do something, he often overindulges. This would be great if Pieces men loved to exercise, but most of them love to eat more than they should. They will need to learn how to eat in moderation, and put in some time at the gym if they do not want to become overweight. Another problem many Pisces men have is that they are very sensitive and emotional. This can cause them mental health problems. Meditation, therapy, and even just talking to a friend about his problems can help this.

The ruling body part for the Pisces man is the feet. Most Pisces men can hike for miles without complaining about his feet aching. However, he often has trouble walking for more than a block without tripping or twisting an ankle. A Pisces male needs to learn to watch himself if he wants to avoid injury.

The Pisces man is creative and fun, and he tends to draw people with the same personality traits to him. He does his best not to judge others based on how they were born. He will be friends with anyone unless they are a jerk. He is always there to listen to his friends in their times of need, even though he may be a bit shy when it comes to talking about his own problems. The Pisces man traits show that he tends to put his friend’s needs above his own, which is why many think he makes such a loyal friend.

The Pisces man isn’t just about listening to sob stories and giving feedback. He is a creative man who loves to do all sorts of things with his friends. He loves to go to music concerts, to go to the beach, and do just about anything that gets his heart pumping or his creative juices flowing.

As a boy, a Pisces guy will love to color, play with toys, and play with their parents, siblings, and friends. They are active children who will play from the time they wake up until the minute they go to bed. Because of this, many Pisces men have fond memories of their childhood. Pisces males who loved their childhoods are likely to stay near their family as they grow up, while Pisces men who have bad memories of their childhoods are likely to move far away. Either way, the Pisces man is still likely to have some loyalty to his family, whether he actually likes them or not.

If the Pisces man becomes a father, he is going to encourage his children to be as creative as he is, if not even more creative. He will want his children to be free thinkers. He does not care much for what they end up doing. All he really hopes for is that they have some imagination that lives on into their adulthood and that they are happy with who they are as adults.

The Pisces man personality traits show that he always keeps an eye out for what is fashionable. He wants to stand out from the average crowd, but blend in with the stylish crowd. He loves to wear all types of clothes. He is sure to buy more than his fair share of clothes as well. His fashion sense can really hurt his bank account. The Pisces man’s favorite color to wear is blue, and most of his closet is likely to be filled with this color.

The Pisces male is not afraid to wear a little jewelry if he knows it will help to accent his outfit. He loves to wear all types of bling, even ankle bracelets, and toe rings if he knows that people will be seeing his feet. He does not need to wear precious metals or gems. He will be happy with any beautiful jewelry, which is why it’s never a bad idea to get him some as a present.

The Pisces man is a dreamer who wants to have a good time. He is friendly, and everyone who gets to know him is sure to agree. Some may think he is strange or mysterious, but someone who knows him well is sure to be able to say that he is a great guy.