The Capricorn woman is usually born between December 22nd through January 20th. She likes to live her life as practically as she can. She does not leave room in her life for many frivolous items or for people who do not really care about her. She has her mind focused on the things that really matter in life. Some people may think that this makes her dull, but the only people who would say something like that are the people who don’t know her well.

Anyone who gets to know a Capricorn woman on a personal level is sure to be better off. Capricorn women have a unique take on life, and they will be glad to share it with anyone who will listen.

Capricorn women take love seriously. If she is with someone, then it is likely that she can see a future with them. She will not spend her time on someone who she thinks will be a waste of time. She falls in love with a person’s character, not their body. Once in love, the Capricorn woman will be as loyal as possible. She will never cheat on her partner, but she will not forgive her partner if they cheat on her. She wants to be with someone who is trustworthy and honest. She cannot be with someone who is not loyal to her.

Sex is not a top priority to a Capricorn woman. She is not one to have sex with strangers. She wants to be in a committed relationship before she does something that serious with her partner. The Capricorn female is passionate in bed, as she cares more about satisfying her partner than satisfying herself. She is not inherently kinky, but she will play along if her partner has any ideas. She is usually submissive but will be dominant at times as well.

Capricorn woman traits suggest that she will be happiest in a job where she gets to help others in need or where she can grow her reputation in a good way. Working somewhere with either structured rules or where she can make up her own rules will be the best place for her. She wants to feel comfortable where she works. It is as simple as that. The Capricorn female will be great at being a doctor, teacher, politician, business owner, or a boss at a retail or commercial business. She can also be content as a stay-at-home mother or a housewife. 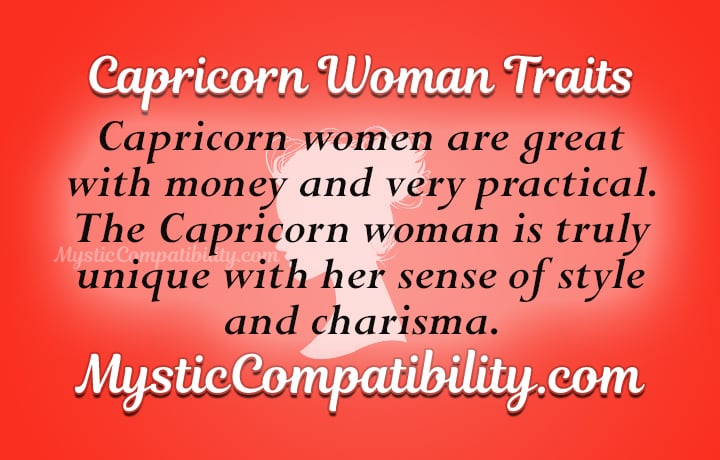 Capricorn woman personality are usually great with money. She does not like to spend much money on things that she does not need. Although, she may splurge from time to time to treat herself for all of the hard work she has done. She is more likely to save up all of her money for when she really needs it. She will save money up for big purchases in life as well, like buying a house, car, and paying for her family’s other expenses.

Capricorn woman personality traits suggest that she knows the importance of living a healthy lifestyle. She exercises to keep healthy, even if not all Capricorn women are extremely muscular or fit. She also knows how important it is to have a healthy diet. She rarely eats fast food. Capricorn is an earth zodiac sign, so she is likely to use many home-grown or fresh food in her meals.

The ruling body part for Capricorn sun sign are the knees and all of the bones. While Capricorn women usually have great bone structure, especially in their faces, their bones often cause them the most problems. Many Capricorn females will break bones during their lifetimes and struggle with knee pain as well. Osteoporosis is a common health problem for Capricorn women in their old age.

The Capricorn woman characteristics show that she is close to her family when she is young. She keeps this bond with her family members for most of her life. She may move away from her family in her later years, but she will come back to visit every now and again. She will never be truly separated from her family. She is not likely to cause drama with her family, which other star signs are more likely to do.

If the Capricorn woman ever becomes a mother, which she is likely to do, she will want to raise them to be much like her. She wants her children to have a sense of imagination and creativity, but she also wants them to know the difference between reality and fantasy. She is not likely to indulge them in myths of Santa or other holiday figures. But instead she will teach her children how to be kind to others and respectful to everyone who they meet. The Capricorn lady will not be upset if her children are different than her. But she will be disappointed if they become rude people.

Capricorn women personality always try to look their best, even though they don’t always try to look their fanciest. She makes sure that her outfits are always cleaned and ironed correctly. She hates going out in public looking messy, so she avoids it at all costs. She dresses up for average events like meetings and family get-togethers, and she dresses to the nines when she is attending weddings or other formal events. Most of the time, she dresses in business-casual attire. Button down shirts, skirts, and trousers are some of her staple clothing pieces.

Capricorn women do not like to spend much money on clothes, but she will splurge on jewelry and other accessories so she can make her outfit pop. Her zodiac sign’s stones are amber and onyx. So she is most likely to be attracted to jewelry made of these stones. Other accessories like scarves and bags also catch her attention, and make perfect gifts!

The Capricorn woman personality traits show that she is truly unique. She blends in with the crowd from a distance, but she shines like a star from up close. A great friend will be blessed to have a Capricorn woman in their life and an enemy will regret the mistakes they have made towards her.