5 Phone Habits That Can Break Your Relationship

5 Phone Habits That Can Break Your Relationship

Over the years humans have made some serious technological advances, creating devices that will forever change the way we live our lives. For the most part, it’s a good thing! Think of all the gadgets you use DAILY. Heck, if I didn’t have a computer… I sure as hell wouldn’t be writing this article. Sometimes though, it can get a little weird… for example, sex robots. Then other times it can actually be a little bit of a bad thing disguised as a good thing. Something with the best intentions, but we have become so dependant on it. So it slowly changes us, and not always for the best.

One gadget in particular that is amazing, but can really affect us negatively if we’re not careful, is the cell phone. Cellphones have come SO far over the years, from being these big bricks to these delicate little touch screens. From just making calls to being able to do almost anything! Texting, banking, gaming, you name it, and there’s an app for it. This one time, no word of a lie, my previous cell phone told me that the Phone app wasn’t working… ISN’T THAT IT’S MAIN PURPOSE?! Not anymore apparently.

But we’ve become so enslaved to our cell phones, so dependent on it. Being in media, I was constantly on my phone phone planning meetings, doing research, using social media, sending documents, etc. It was like it was part of my body. You look around, and you’ll see that almost everyone has a cellphone, even some homeless people! So when I went over a year without one, I felt so lost at first. I was almost clueless, completely forgetting people have survived without them for thousands of years.

But by losing it, it gave me perspective… One night I was on a blind date, and as I looked around me, over half of the people had their cell phones out. My date included! Normally I wouldn’t realize this; I’d be too busy Instagramming my meal and live tweeting the awkward evening. But it was then that I realized how something as trivial as a cell phone could affect ourselves and our relationships both positively and negatively if we’re not careful.

So while keeping in mind that I’m preaching to the choir here, I present you with five bad phone habits that can break your relationship, and how to try to break them.

I’ve been here. It doesn’t matter if you’re out on a date or lying in bed together, but you’ll both be on your phones, online and scrolling through web pages & social media not interacting whatsoever. Then you’ll plug your phone in, maybe give them a kiss and roll over to sleep.

Why is this a bad thing? Well, for me, I love the end of the day where we just snuggle, talk about the day and discuss anything & everything. It wasn’t always like that though, before the most communication before bed was an online comment from me on a cat video he posted or vice-versa, and then a quick kiss and off to dreamland.

Now, I’m also not saying that occasionally checking your phone is bad. Still being in media, I know how urgent it is to frequently check emails and what not. But it’s important to set aside still some time to be alone together and to just talk about whatever is on your mind. We’ve talked about personal stuff like problems we’ve been facing, to some really stupid stuff like how many zombie toddlers could you kill with a baseball bat before you died.

So maybe talk with your partner and come up with a plan to allow a certain amount of time – say a half hour, to your bedtime routine for your phones and then together turn them off and enjoy each others company. 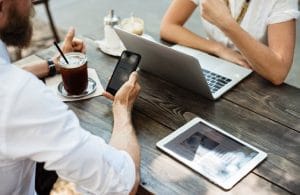 Additionally, It’s so easy to hide behind our phones and social media. Plus it feels great to rant. I will try projectile word vomit an angry tirade now and again. But it’s important to realize that some things, especially in a relationship, need to be private.

Try discussing things in person first, let them see how angry or hurt you are. If you both want the relationship to last, you will try to work through them. If things are too heated in the moment, then take a while to cool down and think clearly. Furthermore, try writing down your feelings and thoughts and even if you’re shy you can then read it or give it to your partner.

It’s ironic because the original main purpose of a phone was for communication. It is rather a tie in with the above point. We get so used to texting and social media that we don’t call or talk in person as much. Sure, it can be more convenient. However, it also removes a certain perspective and can easily be taken the wrong way.

You can’t tell if someone is angry or sarcastic because where in real life you can hear it in the tone of their voice, a message is without. We read them in their voice in our head, but can easily mistake their intent and just cause more trouble and stress down the line. Plus, emoticons are great… But you can never know when it’s really genuine or if they’re just covering up their real emotions.

Try to call or even Facetime or Skype your partner every now and then. Even if it’s just to say, “Hey! Just wanted to hear your voice and see how you’re doing?” 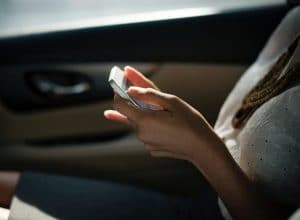 While there may be a burning curiosity to go through your partner’s phone, pictures, downloads, and more commonly text messages… It shows complete lack of trust and can really offend them – especially if you’re caught red handed. I’ve been guilty of both ends of the spectrum on this. It hurt so much that an ex-fiance didn’t trust me while I was away at school, and eventually led to the cancellation of the engagement and relationship.

Sure, not every partner is perfect and may be hiding something. But if you’re suspicious, bring it up, see how they react, talk it out. Things haven’t always been perfect with my current boyfriend of 3 years, in fact early on I was quite insecure about the relationship lasting. His ex-had started snapchatting him, and so, of course, my head being the dick it can be made me paranoid and jealous. Eventually, I fessed up to him, and he was angry but also understanding. He was so grossed out that I even thought he’d go back to her, and after discussing it he deleted the app.

Now, I didn’t tell him to delete it nor did I try to change him. He did that for my own well being and for the relationship. Everyone is different, so again it boils down to talking to your partner to see what will work best for you. Let them know any fears or problems you have, respect each other’s privacy while still having the mindset of “Is there something I wouldn’t want my partner to see? If so, delete.”

5. Living Life Through Your Phone’s Camera

While it’s great that technology has come so far that we can literally capture any moment wherever through our phones, and instantly edit it & upload to all of our social media outlets at once… Don’t use it constantly. Remember to enjoy the moments in the real world, not through the phone’s screen.

Sure taking selfies together or recording a moment for YouTube can be great, but don’t forget to actually live in the moment. Make memories together and experience things together.  We aren’t all professional photographers and a majority of the pictures we take we won’t ever look at again… So why do we spend so much time staring at a small screen taking crappy phone pictures, instead of participating in the memory with your loved one? 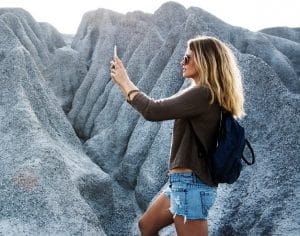 Everything in moderation, take a few pictures to help those memories last. But then put the phone away and have fun with your loved one, bond, keep physical mementos and take mental pictures that you can talk about through the rest of your relationship. Technology sometimes fails, don’t lose all your memories to a broken computer. Live the moments.

In conclusion,  none of these are quick fixes to relationship problems, and will all require effort from both you and your partner if you want them to work. But together, if you’re both serious about the relationship and want it to last, you can work through anything. Similarly, maybe even challenge each other to go a day or week without your phones. Furthermore, You could even make it a whole romantic date idea, spend the day focusing on each other while your phones are waiting back at home. Your phone and online friends can wait, put your relationship first and you might be stronger for it in the end.