Cancer man Pisces woman compatibility duo share an intensely emotional connection. They are equipped to experience a whole range of sentiments throughout their relationship. There is no middle ground with them, they are either blissfully in love or so very, very miserable together. Stability is not something that the Cancer man Pisces woman love match will ever be labeled with.

The subdued and quiet Pisces woman is quite shy and the cautious Cancer man will have to make the first move. When she starts to open up to him, he will realize that they have a lot more in common than what he might have initially thought. The noble Cancer man is the perfect gentleman and is courteous and cherishing to the Pisces woman.

They are animated and demonstrative and can be tremendously sensual together. The Cancer man and Pisces woman are bonded by their mutual resourcefulness and creativity. They are a safe haven for each other. Moreover, they share a high amount of unspoken compassion in them. From a social perspective, they will always put their relationship ahead of everything else. Accordingly, they prefer to spend time together than anything else.

Cancer man and Pisces woman love compatibility have had their share of problems. Similarly, they have been deeply hurt many times. They tend to wear their hearts on their sleeves and comprehend that they are able to survive whatever life throws at them. The Cancer man Pisces woman in love understand what it takes to keep a relationship alive and are not afraid to go the extra mile to make it work.

It is important to note that Cancer man Pisces woman compatibility often works really well. Nevertheless, they may be exhausted from their cloud of emotions. Their compatibility has the ability to be stable and tranquil. This is because the Pisces woman shows the Cancer man how to live in the present rather than worrying about things that might never happen.

Romance existing in the Cancer man Pisces woman in bed is comforting and intuitive. He will feel more relaxed than he ever thought possible. She will have found someone that can understand her difficulties with empathy and proficiency. Within their relaxed environment, their romance will bloom.

Passion is not something that binds them, as they are far more communicative than most couples. The Cancer man Pisces woman zodiac match will woo each other with words until early hours of the morning. The passion will follow its natural path of progression further down the line within their relationship.

Sex for the anxious Cancer man can be one of the best sexual encounters he has ever had. The calm and collected Pisces woman will encourage the insecure Cancer man to be completely and utterly comfortable during their love making. He will be romantic and focused whilst she will bring in the indulgent and sensual side in their alliance. Cancer man Pisces woman sexually are able to satisfy each other’s needs wholly. Their love making will be stimulating and sensational for both of them.

Cancer man Pisces woman marriage works well for them if the distracted Pisces woman is able to shift her focus onto the niceties in and around their home. The fastidious Cancer man likes things a certain way and the nonchalant Pisces woman isn’t really bothered by all the humdrum and demureness he prefers. If they are able to find a balance that works for them, they are able to create a beautiful home, the atmosphere being magical and striking. 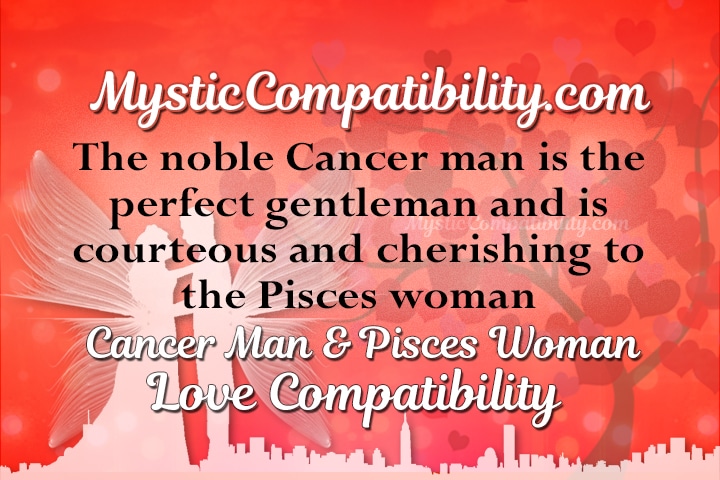 Neither of them wants to surround themselves with drama in their day to day lives. Cancer man Pisces woman love compatibility duo appreciate a comfortable home and can understand intense feelings. The Pisces woman doesn’t concern herself about the future but she is rather reactive in her thinking. She would rather deal with a situation when it happens than worry about it before she needs to.

The shrewd Cancer man has an inner strength that gives him the ability to deal the burden of day to day difficulties. When both their emotions get the better of them, somehow he is able to address situations in a practical and stable manner. What could aid the Cancer man, is that the radiant Pisces woman is able to bring serenity to his moods and take away his concerns. They are very much on the same page and comprehend their partner’s needs, wants and desires.

The Pisces woman provides the artistic objectives and he brings the work ethos to make them happen. She is not very concerned with household duties and he surpasses at it. They are a really good fit. Cancer man Pisces woman couple will, therefore, share a home that is full of bliss and just how they both want it.

The issues found in the Cancer man Pisces woman compatibility will be few and far between. If they are not able to face their problems head on, he will withdraw and she will walk away not wanting to even try and make it work between them.

The dreamy Pisces woman can give the impression of being detached or that her focus is elsewhere. The insecure Cancer man requires constant reassurance that his hard work is paying off. He needs to know that all the effort he is making to ensure her happiness, is successful. The Pisces woman will need to be cautious not to wound his complex nature.

When a Cancer man wants to attract a Pisces woman, he should be subtle in his approach. He should think of ways that will capture her without him scaring her away. Flowers work well with the Pisces woman, and he can start by giving her a small token and work his way up to something lavish. He can take the lead, as she prefers to take a back seat during courtship.

When the Pisces woman wants to get the attention of the Cancer man, she can bring to the fore all her feminine wiles. He will want to take charge, and she should passively let him do so. Should she be able to do so, bake him something special and give it to him for no reason at all. She should show support to his career aspirations and offer to help where she can.

Cancer man Pisces woman compatibility is over when both of them become so absorbed in their own emotions and begin to expect too much of each other without thinking of giving back. The Cancer man will patiently explain that the relationship is over and that they both need to move on. They will both retreat into their comfort zones and get on with their lives.