A Cancer man is usually born between June 22nd through July 22nd. However, sometimes these end dates can change based on the cusp. If a man is born on one of these zodiac dates, he should check the Cancer dates for the day he was born in.

Cancer men are the strong and silent type. He likes to keep to himself and he doesn’t say much, but there is a lot going on inside his head that he doesn’t share. He is an intelligent man, even though he is not very creative. He is polite to nearly everyone who he meets. He is a family man, a wonderful friend and partner, and a hard worker. The Cancer guy does his best never to let anyone down, which is part of the reason he is such as great man.

The Cancer man traits show that he has a hard time making new friends. And it is even harder for him to enter into a romantic relationship. He will likely be friends with someone before he begins to get into a romantic relationship with them. He wants to make sure that he is with someone who will not hurt him. The Cancer male hates the idea of getting cheated on. And, he could never forgive someone who did that to him. On the bright side, this also means that it is highly unlikely that he will ever cheat on his partner. The Cancer man personality is actually not likely to have many problems with a partner, as he hates starting drama. If his partner is kind and loyal to him, then he will be the same towards them.

The Cancer man in bed will want to be in a committed relationship before he has sex. He does not need to be in love, but he needs to be sure that his partner will not hurt him. When he has sex, he focuses more on pleasing his partner instead of pleasing himself. He is passionate in bed, even though he is not creative or crazy. He tends to stick to what he is good at. The Cancer guy is not kinky, but he may be willing to try something new if he is with someone who he trusts entirely.

The Cancer man personality traits show that he likes to keep things practical in all areas of his life, especially in his work. He does not need a flashy or extremely high-paying job to be happy. All he needs is a stable job with good benefits to be happy. He wants any job that will help him to feel secure, and that will make him feel as though his family is also secure. He will do the best in a job that will allow him to use his intelligence. Being a doctor, lawyer, teacher, banker, manager, writer, or businessman are all great careers for him to get into. 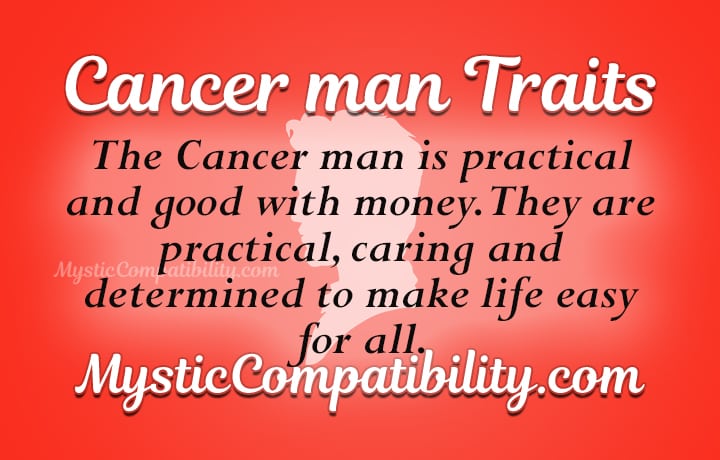 The Cancer man is great with money, so great that others simply think he is cheap. Shopping secondhand isn’t embarrassing for him, it’s rewarding! He loves to find great products at cheap prices. He is also great at saving money. He rarely splurges to buy anything for himself. Instead, he prefers to save up money so he can buy expensive items like cars, houses, and vacations. Of course, buying these things are rare.

Cancer men both love and hate dieting. They seem to go back and forth on their diets all of the time, which makes it nearly impossible for the Cancer male to stick to a diet. He is always moving from one new diet craze to the next. In the end, it doesn’t help him to lose much weight. Instead of trying to diet, a Cancer man will be better off if he starts a workout routine instead.

The ruling body part for the cancer man is the chest and stomach area. The cancer man, when he sticks to his exercise routine, will be especially muscular in these areas. If he slacks on his diet, then he is likely to build up weight here more than anywhere else. Cancer men also tend to complain more about chest pain and stomach aches more than other male zodiac sign members.

The Cancer man traits show that he is shy and tends to be alone most of the time. He is an introvert, to say the least.  This does not mean that he is a rude person. He is actually quite respectful and polite, even when he is talking to people who are being rude to him. He does not have much of a temper, which makes him seem easy-going, even when he is stressed out.

A person who is friends with a Cancer man is sure to have a drama-free friendship. He isn’t the type of guy to date his friend’s partner or to start a fight for no reason. He isn’t one to start a hangout session, either. If a person wants to be a friend with a Cancer male, they are going to have to make the first move. He often puts work before friends. So a friend will need to step in and tell him that he needs a night off before he will actually take a night off. All of this considered, he still is a good friend.

The Cancer man personality traits show that he is highly family oriented, even from the time that he is a young child. Some of this favorite things to do as a boy are to spend time with his parents and siblings. Playing board games or playing outside at family reunions are always a treat. As he grows up, he is likely to remember the fond events he took part in as a child. He is likely to want to pass down the traditions of the past to his children when he has some.

Cancer men are likely to become fathers sometime in their lifetime. He just loves the idea of family so much that is is pretty much guaranteed. He will want to raise his children in a traditional way. He is not much for new or creative parenting ideals. He will want to go with the tried and true methods he knows and loves. When he does this, his children will end up having much of the same childhood that he did, which is his ultimate parenting goal.

The Cancer man personality likes to pretend that he doesn’t care about the newest fashions, but it is easy to tell that he keeps up on the trends just by looking at his outfits. He rarely wears anything flashy, as he tends to wear conservative, but classy styles. He stays away from bright colors, preferring lighter colors instead. Whenever he goes out, the Cancer man is sure to look fancy, but not flashy. He likes this middle ground, and he is likely to keep it no matter where he goes.

The Cancer man is not a fan of jewelry. He thinks that it is too flashy or just plain unnecessary. He likes to keep his outfits simple, and he thinks that he cannot do this while also wearing jewelry. He may wear a watch or a tie to accessorize, but that’s about as decorative as he gets.

The Cancer man is practical, caring, and determined to make his life, and the lives of his loved ones, as easy as possible. All of these things help to make the Cancer man great, and a wonderful person to get to know.