In a Libra woman Aries man compatibility, they don’t usually make a particularly good couple. They have a lot of differences in nature, and both are very masculine. As a result, it can cause friction between them. As these signs have very different needs, they may become easily aggravated with one another’s “neediness.”

The Libra woman tends to have a particular way with people, and this makes her incredibly popular. She is a very empathetic person and can relate to almost anything. People flock to her for advice because she is a brilliant listener, and knows the struggles that other’s go through, even without going through them herself. She is charming, easy-going and positive, and these things make her an incredibly good friend to have.

In most cases, the Libra woman is surrounded by a large group of friends, as she makes such a good companion. However, this can sometimes get to her head, and she likes to think that she is the center of all friendship groups. The constant attention she receives from other could make her big headed, and she may value herself a bit too much. She enjoys being admired, and she is no stranger to it. Most people see her as a leading figure, somebody to look up to, and she basks In this type of attention. She is not an attention-seeking person, but she loves to be admired.

Libra women work incredibly hard for what they have. They enjoy being surrounded by luxury, and will often splash out on luxurious items to make themselves comfortable. A Libra woman takes great care of her appearance, as she has a lot of personal pride to uphold, and hates feeling anything less than her best. She is incredibly intelligent and tends to show this through creative outlets. A Libra woman can often be found in professions revolving around the creative arts, as this is a particular talent she holds.

Additionally, she has very high standards. So, the man should be wary during Libra woman Aries man date. Elegance is key, and she would much prefer a fancy dinner and a stroll than a movie and a burger. Capturing a Libra woman’s heart is not hard; shower her with adoration. She is typically a very stereotypical lady and loves being given flowers, love letters, and compliments from her partner will keep her happy for days. In return, she is an incredibly doting partner and will do anything for her significant other. She adores him with her entire heart and will be a brilliant companion.

The Aries man loves adventure and hates wasting away his time doing nothing. Every day brings a new challenge and new things for him to explore. He leads a very fast paced lifestyle, and almost never slows down for anyone. At any given time, he will probably be setting himself new goals and things to work towards, so that he will never have a dull moment.

When it comes to Libra woman Aries man relationship, he needs the woman to be incredibly fast-paced. This way, she can keep up with his active lifestyle. He hates feeling dragged down by a partner and wants somebody who can offer him a lot of thrill and excitement. A companion is what he needs, rather than a burden. If a woman can offer him the right pace and stick by his side throughout his many activities, he is sure to fall for her.

He is adventurous, and this makes him an incredibly good leader. His boldness and unafraid nature make him perfect for leadership. In fact, he is usually picked for those sorts of roles in the Libra woman Aries man compatibility partnership. He is incredibly enthusiastic and loves the journey he goes on to achieve his goals.

The woman in Libra woman Aries man union should be willing to be swept off her feet. The Aries man is rarely satisfied with the result and is on an everlasting journey. No matter what, he is always on the search for something better, including within relationships. The thrill of the chase is important to him, and if he feels as if he is settling, then he will become incredibly depressed. This is why he needs somebody who can keep him on his feet, and make him work hard for her attention every day. 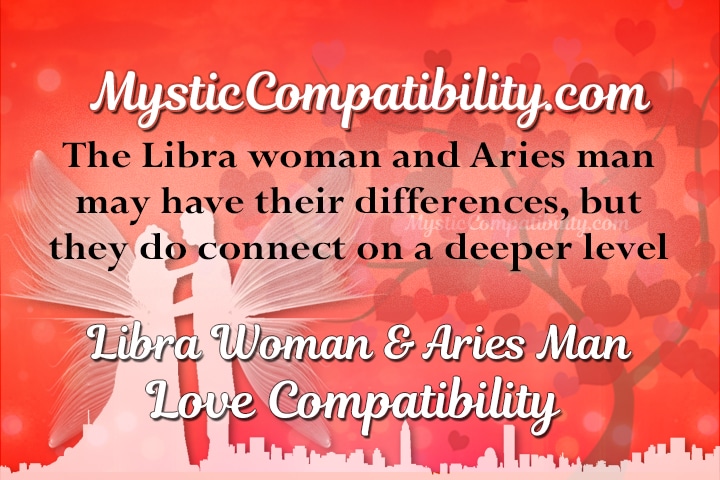 In most instances, this Libra woman Aries man couple does not match very well. They have a lot of differences that mean they are not able to get along well, which could ruin their relationship.

Sexually, this couple is highly compatible. If this couple can respect each other’s boundaries, they can have a perfect Libra woman Aries man compatibility sex life. Also, have a lot of fun together. The Libra woman and Aries man both have high levels of energy, and neither are strangers to a little bit of tasteful aggression. Their sex life will be passionate and energized, ensuring both have a brilliant time. They can both satisfy one another, and neither will feel as if something is missing.

The Libra woman and Aries man may have their differences, but they do connect on a deeper level. Emotionally, this couple is perfect for one another. The Libra woman Aries man soulmates have a deep love and adoration for one another. Therefore, there is no doubt of the emotional connection that they share. This could be the saving grace of their relationship because it is rare that a couple will love one another as much as this couple.

When it comes to Libra woman Aries man love making, a problem may arise involving aggression. Both of these signs are incredibly headstrong, and they may struggle to stick to one another’s boundaries. Passive-aggression is not uncommon, and it could take things too far way too quickly. These signs should be wary of these and do their best to listen to one another and pay attention to respecting one another.

Trust is another thing that this couple tends to struggle with. The Libra woman is incredibly insecure and needs a lot of reassurance that she is good enough, and worth being respected, On the other hand, the Aries man likes a confident woman who will not be overly clingy. This could, create tension, and perhaps lessen the Aries man’s loyalty toward his partner. If he feels trapped or feels like his partner is too needy, he may flee the situation. The next thing will be a Libra woman Aries man break-up.

The Libra woman knows this, and may not trust him to be completely loyal. Trust is incredibly important in any relationship, as it will make or break a relationship. This couple should give one another Libra woman Aries man trust levels that are necessary to maintain a healthy relationship. Otherwise, things could go awry for them.

This couple has many struggles when it comes to communication. They need different things from one another and may become quickly annoyed with the repetitiveness of each other’s neediness. The Libra woman needs constant reassurance and to know that she is liked. For the Aries man, he needs to see that he is moving forward with his life and that his partner is not stagnant. These things will begin to grate on one another and cause friction between Libra woman Aries man.

A Libra woman Aries man compatibility has its ups and downs. In fact, it is hard to say whether it will be successful or not. While they have many factors that say they will be a terrible couple, they do have an undeniable emotional connection that could bind them, together. For the Libra woman and Aries man, it all comes down to the individuals, and whether the Aries man can stay loyal in times of tribulation.