In the Libra woman  Libra man compatibility, they make a good couple, although not a perfect one. They do have things to work on to be a perfect couple. However, they have so many good points going for them that it shouldn’t be an issue.

The Libra woman is possibly the most extroverted of all the zodiac signs. She has an amazing talent when it comes to social interaction, and is often surrounded by a large group of friends. Being an empathetic person, the Libra woman knows exactly what advice to give at all times, and is often known as a slight agony aunt among her friends. Equally,  is always a brilliant listener, and a shoulder to cry on. No matter what, she is there for her friends. Furthermore, knows how to be respectful and enthusiastic when speaking to anybody, no matter whether she truly likes them or not.

She is a very kind person and radiates a warmth among her friendship circles. Passionate, driven, caring and reliable; the Libra woman is an incredibly attractive friend. Also, she tends to have many people gravitating towards her. Additionally, she is always there for people. Her bubbly personality makes her a lot of fun to be around. Her charisma and charm also play a part in this. As a result, making her extremely easy to get along with.

She does tend to crave attention and admiration, as it gives her a sense of self-worth. The Libra woman enjoys showing her talents to the world, allowing other people to appreciate her. Unlike the Leo woman, this is not an egotistical person, but she does like to be given the attention she craves. Compliments and affection are the keys to her heart, and if she feels admired, then she will thrive.

The Libra woman likes to live with a high quality of life and does her best to treat herself well. She enjoys having luxurious items, as they make her feel more confident. Treating herself to expensive clothes, items and experiences is nothing new to her, and she likes to look her best at all times. A Libra woman puts a lot of effort into her appearance, and if she looks her best, she feels her best.

However, one trait of the Libra woman is often deemed as negative. She struggles to feel appreciated with the attention of only one person and tends to seek validation from many sources at one. This does not mean that she is disloyal, but partners may become insecure that her attention is not primarily on them. Sometimes this may lead to distrust. However, the Libra woman would not do anything to hurt her partner. She is in it for the long run and wants a long-term Libra woman  Libra man relationship. Commitment is key to her, and she will treat a partner with the utmost respect. She loves and cherishes her partner every day, and would do anything for him.

The Libra man is a lot like the Libra woman in many ways. First and foremost, he is an incredibly analytic person. Everything must be examined with extreme detail and precision, and nothing can be overlooked. In his life, nothing can be emotionally influenced, and he has a very rational approach to everything.

He can be quite robotic in some aspects, as he hates feeling emotions and is very methodical and technical. Emotional influences are almost non-existent for him, and he thinks that large displays of emotion are abhorrent. Rationality is everything for him, and he believes that everything in his life should be approached from an objective standpoint. This can sometimes get the better of him. However, it can make him seem like a cold person in a Libra woman  Libra man marriage.

Additionally, for the Libra man,  Libra woman  Libra man commitment doesn’t come easily. He is not too interested in settling down, unlike his female counterpart. His need for attention and admiration can sometimes get the better of him, and he isn’t particularly fond of long-term relationships. He has a strong need to be adored by everyone and likes to make as many friends and acquaintances as possible.

Unfortunately for any woman wanting to pursue him, he tends to have many women fighting for his love. This further feeds his need to be loved. Therefore, making him even less likely to settle down. A woman wanting a Libra man should keep him on his toes, and let him chase her. He loves the thrill of the chase and will become quickly bored if a woman throws herself at him.

This  Libra woman  Libra man love compatibility should be a success, and they have great potential. They have a brilliant bond and emotional connection, and there is a very bright future ahead of them.

The Libra woman  Libra man zodiac signs complement each other greatly, so this couple is sure to be a success. They may have their minor issues, but overall they are a fantastic couple who have every opportunity to have a fantastic future.

The Libra woman  Libra man sexually are very compatible. They have very similar needs, so they will know exactly what to do for one another. Satisfaction will never be an issue for them, as they are both able to receive everything they need to feel thoroughly sexually charged. Sparks will fly when this couple gets together, as they can recognize one another’s needs and preferences. They connect mentally, making things ten times easier for them than any other couple. Both will be extremely attracted to each other, and respect one another’s preferences. 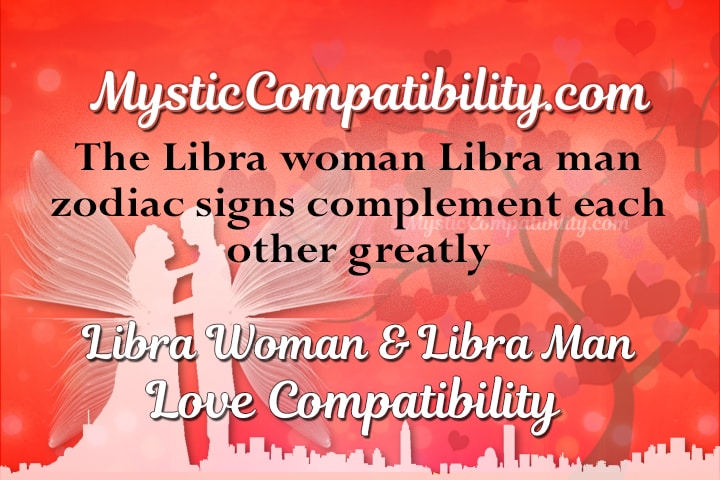 Communication is not an issue for this couple. Seemingly, there is a strong chance that they will get along extremely well. Both are social people, so the  Libra woman  Libra man soulmates should have very few issues when it comes to sharing their thoughts and opinions with one another. Conversational topics will fly, and it will be hard to shut this pair up. They both have plenty to talk about, and it is rare that there will be a halt in this pair’s love for communicating with each other.

When it comes to values, this couple is incredibly compatible. Mutual  Libra woman  Libra man values are important, as they give the pair room to grow and learn together throughout life. For a couple to have similar values, means that they have a future together. Similarly, it allows them to work together towards a goal.

The main issue when it comes to a  Libra woman  Libra man coming together is their trust for one another. A Libra is very much a free spirit, so if both are trying their hardest to gain other people’s attention, things could get tough. This pair has never known trust issues until they get together, and things will all come spilling out into the open. Two people, constantly wanting attention from outside sources and feeling insecure about the relationship. Trust will be a constant struggle, and could potentially spoil this couple’s future for good.

To add to those, this  Libra woman  Libra man pair could run into is respecting themselves more than each other. Both the Libra woman and Libra man enjoy being admired, so things could get rocky if they begin to fight for each other’s absolute adoration. They should try to overcome this by considering one another, and appreciate their flaws more.

Overall, this couple has a lot of potential for success. Very few things will get in their way as a couple, and their future together seems promising. Both the Libra woman and Libra man should work on their few issues. After that, their problems will fly out of the window. In most situations, this  Libra woman  Libra man compatibility has a bright future together, complimenting each other very well.