The Libra woman and Capricorn man do not have the most significant potential for success. Despite having a few pros, most of the time this couple do not work out well. In a Libra woman Capricorn man compatibility, their emotions clash significantly. Similarly, other factors contribute to their low potential as a couple.

The Libra woman is a social butterfly, and she rarely has any issues when it comes to socializing with others. She has an incredible sense of empathy and has a talent for listening. No matter what, she always has respect for the people around her, and she finds it incredibly easy to relate to them. People know that they can talk to her, as she always has constructive, helpful advice, which is the product of her brilliant talent around empathy. Social interaction is no problem for the Libra woman, and she may frequently find herself surrounded by large friendship groups. Many people flock to the Libra woman, as she is an approachable and fun person to be around.

Social interaction is no problem for the Libra woman. In fact, she may frequently find herself surrounded by large friendship groups. Many people flock to the Libra woman, as she is an approachable and fun person to be around. The Libra woman is incredibly kind and warm, and always has something nice to say about everybody. She enjoys being around others, and she gets her energy from socializing with other people. She is passionate and driven and can be relied on no matter what. Her soul is kind, and she does her best to make everybody feel special.

One prominent trait of the Libra woman is her need for validation. Partly why she is so social, she needs people around her to admire and appreciate the things she does. This is her main source of self-worth, and she can struggle greatly without this. Words of affirmation and positive attention give her the value that she needs to succeed in life. Unlike the Leo woman, the Libra woman prefers to put herself out there, and show off her talents, rather than expecting people to appreciate her purely for existing. It is a focus on her actions and the things she can do for people, rather than her existence as a whole.

The Libra woman is very passionate about living her life in higher quality. She sees luxury as an incredibly important thing and will do whatever she can to have a good quality of life. Buying herself expensive items is nothing new to her. Also, she likes to take frequent holidays and trips to different places to broaden her horizons. Her appearance is also essential to her. As a result, she struggles to feel good emotionally unless she looks her best.

When it comes to Libra woman Capricorn man marriage compatibility, the Libra woman makes a very kind, attentive partner. She does whatever she can to make her partner happy, and loves him with all of her heart. The main problem she runs into within relationships is trust. With her need for validation from many sources, some men may find it difficult to accept their partner needing attention from somebody other than him. This does not make her unfaithful, however, and she will make a very kind and thoughtful partner to any man.

The Capricorn man is an incredibly driven person. In fact, he rarely lets anything get in the way of his goals. No matter what, he always has something that he is working towards. Also, he values his ability to work his hardest towards these things. It does not matter how long it will take him to succeed. The good thing is, the Capricorn man has an incredible drive and passion. Therefore, he can wait a very long time for the things that he wants.

Additionally, he is a very caring person. Equally, he plans everything he does quite carefully. He hates to feel as if he is diving into things without considering them carefully first. For him, he considers every aspect. His goals are important to him. Therefore, he does not want to ruin these things by allowing a quick Libra woman Capricorn man relationship.

He is not an emotional person. Hence hates to feel as if somebody is trying to force him to a Libra woman Capricorn man commitment. It takes a lot of patience and gentle coaxing before the Capricorn man will open up to a partner, and allow his true colors to show. While he is not emotional, he does have the ability to provide a partner with amazing comfort and stability. He is definitely for the sensible woman, as he is not able to provide extreme excitement on a day to day basis.

This couple does not have the most significant chance of working well. It is likely that things will go sour very quickly. These Libra woman Capricorn man zodiac signs do not have any problems with one another. Still, they will not get along well in a relationship. 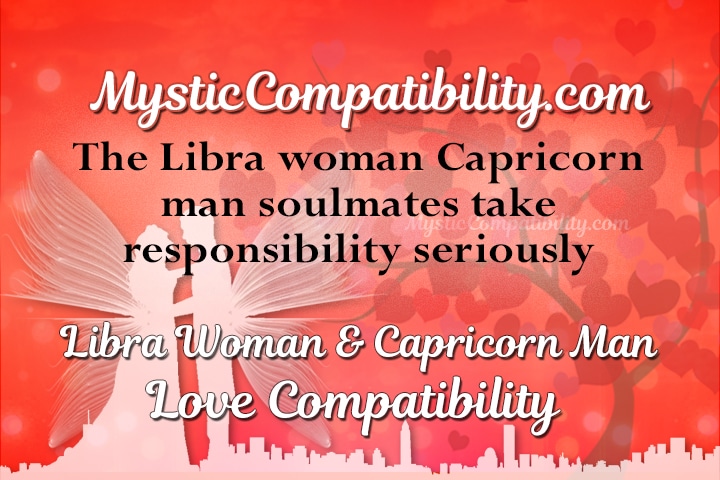 Trust is not an issue for this couple. Although the Libra woman’s attention may stray, the Capricorn man has a certain way of turning all of her focus on him. For this pair, Libra woman Capricorn man trust is an incredibly important thing. It can become one of the redeeming qualities of their relationship. Together, there is nothing that this couple cannot work their way through.  They simply need to retain their trust in one another.

Another saving grace of this relationship is the couple’s shared values in life. Both the Libra woman Capricorn man soulmates take responsibility seriously. This will help them to overcome a lot of barriers. Both signs will accept the things that they do wrong in the relationship. Also, make a conscious effort to change them, which will be a key thing in saving their relationship.

When it comes to this Libra woman Capricorn man couple, there are a few things that make them unsuitable for one another. They will not be disastrous, but they have a few flaws that they need to overcome as a couple.

Sex will not be the most passionate thing in the world for them. They have the energy that makes a brilliant Libra woman Capricorn man sex life. Both are waiters. Neither tends to step back and allow their partner to be the ones to take the lead. This could result in the couple becoming stagnant, as neither can make the initial step. Sex is important in a relationship. It allows the couple to bond with one another, and create a strong relationship. This couple will not be able to satisfy the needs

This couple will not be able to satisfy the needs of one another, and they will both end up feeling somewhat empty. One of the biggest obstacles that this couple has to face is communication. They are both incredibly stubborn people. Therefore, they may frequently butt heads throughout their relationship. Both the Libra woman and Capricorn man are incredibly steadfast, and both tend to hold their ground very stubbornly. This could create tension between the Libra woman Capricorn man lovebirds. Eventually, their ability to communicate will suffer greatly. As with any couple, communication is important for them to overcome obstacles and function as a couple.

Emotions are the most prominent problem that this pair face. The Libra woman Capricorn man are incredibly incompatible when it comes to the way that they handle their feelings and see the world. In the long run, it will affect their functionality as a couple. Every relationship requires a strong emotional connection between both signs for it to be successful and have good potential. Unfortunately for this couple, they lack this connection.

For the Libra woman Capricorn man, things do not look great. They both have some differences that prevent them from being a successful couple. But, that does not mean that they cannot get along. It is unlikely that this couple will fight and hate one another. Still, they do not have the emotional connection required to make a good couple.