The Pisces man and Libra woman do not have the greatest chances of success. They have many differences and will clash with people. Their lack of emotional connection will ruin their potential Libra woman Pisces man compatibility. Also, lack of ability to communicate with one another.

The Libra woman is known for her talents when it comes to social situations. She is an incredibly extroverted person and has a knack for making friends and gathering a large group of followers. The Libra woman can empathize with almost anyone, and she is also an excellent listener. People gravitate toward her because they know that she cares about their problems and will offer respectful, relevant advice. Often she is an agony hunt among her friends. This is because people trust her to be truthful and listen carefully to what they are saying.

Additionally,  the Libra woman sometimes gets too expectant of other people’s opinions of her. She likes to be liked. If she doesn’t feel like people enjoy her presence, then she will become distraught. More so than other signs, she wants to show what she has to offer to the world. Also, she wants these things to be appreciated. Rather than being loved for her whole being, she wants to be appreciated for the things that she contributes to her friendships and the world.

A Libra woman likes to live her life in luxury and is no stranger to spending money to treat herself. Having nice things and being able to do exciting things brings her happiness. Luxury is important to her, and she loves to feel as if she has a high quality of life. Another thing that she likes to indulge in is her appearance. If she is not looking her best, she isn’t feeling her best. Her appearance is significant to her, as she spends such a lot of time in social situations and showing her face to people.

She is an incredibly kind-hearted person and would do anything for her friends. Warm, bubbly and confident, the Libra woman tends to attract others incredibly easily. She has a personality that shines, and other people react well to it. Her optimistic attitude and positivity throughout life make her an incredibly nice person for a Libra woman Pisces man date.

When it comes to Libra woman Pisces man relationship, the Libra woman is very loving. She is a good listener and very good at communicating. Added to this, she is a very loving person and would do anything for anybody. Especially when it comes to her partner, she gives him her all and wants to provide him with all the love he could need. However, she frequently runs into issues when it comes to trust.

The Libra woman likes to receive attention from many different sources, not just one. This could make her partner in their Libra woman Pisces man love affair feel uneasy. If he is not extremely secure within himself, he may struggle to trust her when she is out at social events, as she enjoys the attention she receives. On the other hand, the Libra woman would never do anything to hurt her partner, and it is rare that she will ever be disloyal.

The Pisces man lives in a world of his own, and can sometimes be stuck in his imagination a little bit. The reality, with all its grit and stress, makes him uncomfortable. Therefore, he would much rather create his version of the world. Facing his problems and taking part in practical activities make him anxious, and h would much rather see things through rose-tinted glasses. On many occasions, a Pisces man may turn to alcohol and drugs to transport himself to his world. He is also an incredibly emotional person and may struggle to contain it.

Additionally, the Pisces man in  Libra woman Pisces man commitment likes to be the knight in shining armor. His partner is sure to be thoroughly pampered and treated like a princess. He is a hopeless romantic and seeks out the perfect fairy tale romance with his partner. However, this may sometimes mean that he breaks up with a partner out of the blue because the relationship doesn’t meet his perfect expectations. This has been known to happen frequently within relationships involving a Pisces man and can be heartbreaking. If he feels that his partner can provide him with a perfect Disney relationship and happily ever after, he will dedicate his entire life to her.

The Libra woman and Pisces man are unlikely to have a happy, healthy relationship. Instead, it is likely that things will end in flames. These Libra woman Pisces man zodiac signs are unable to make each other happy in the most critical ways. As a result, this will cause them ultimate suffering. 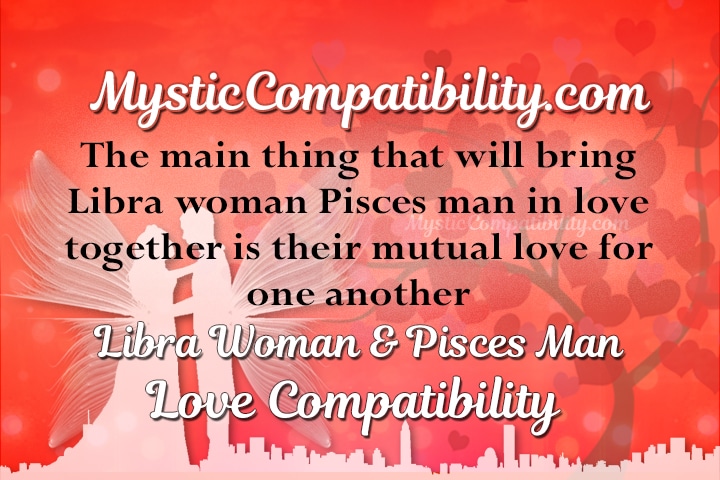 The main thing that will bring Libra woman Pisces man in love together is their mutual love for one another. When the Libra woman is in a relationship, she puts her partner before herself in every way. Luckily, the Pisces man feels the same way. This tiny detail of their relationship could be the complete saving grace of their entire relationship. Putting one another first means that both are considerate and caring and that they have a strong love for each other.

In most cases, this relationship is not one to be recommended. The Libra woman Pisces man might have their pros. However, there are a lot of things that prevent them from having a particularly successful relationship. They have very few things that offer them potential within their relationship. Furthermore, is likely that things will go drastically downhill.

Sexually, this couple does not tend to work very well. They cannot give one another the Libra woman Pisces man sexual satisfaction that is required for a healthy sex life. As a result, this could take a toll on their relationship. When two people cannot give each other adequate satisfaction, they may turn and try to find it elsewhere. The Libra woman requires a man who is strong, while the Pisces man needs a gentle lover.

Trust is quite possibly the worst aspect of this relationship. Both parties are prone to having straying eyes, and this can only cause distrust and disloyalty. Neither the Libra woman nor the Pisces man trusts one another. This will have an extremely detrimental effect on their relationship. Trust is one of the most important things in a relationship, and without it, no couple has any chance of succeeding. Without Libra woman Pisces man trust, many arguments, and horrible opinions will form. Eventually, the couple will cease even to want to tolerate one another.

Communication is also a huge issue for this couple. The Libra woman wants to help the Pisces man to grow and change. On the other hand, he would rather stick to his fantasy dreamland. They will clash in many situations. Without proper communication, they are bound to get into many Libra woman Pisces man arguments. Communication is important in a relationship because of it allows the couple to work together and overcome their obstacles as a team.

Libra woman Pisces man emotions are another downfall of this couple. The Libra woman and Pisces man do not have an emotional connection, which means that they will not care about each other too deeply. They may enjoy one another on a surface level, but when it comes to their true feelings, they are not very important to one another.

In conclusion, the Libra woman Pisces man compatibility has little potential. Instead of being a happy, healthy couple, these signs are likely to clash and make one another miserable. Furthermore, they do not possess the emotional connection, ability to communicate, and tolerance for one another that is required to have a good relationship. Unfortunately, this couple is better off leaving one another alone, as they can only cause unhappiness for each other.