So you think your man is gay huh? Well, I won’t lie… There is the possibility. But it’s 2016, and these days there are so many types of sexual preferences that it’s hard to keep up! But even if he was, would that be so wrong? Sure it’d suck for your relationship right now, but down the road, it would cause more problems and lead to more heartbreak. Best get this over with and help him out of the closet so you two can laugh about this in the future. Plus, this way you can both move on and find someone who will make you truly happy sooner.

Personally, I wouldn’t read into it too much. He could be Bi or Pansexual, which could mean he’s also into guys – but still obviously digs you. He could be straight, but metrosexual or into more feminine things than masculine, nothing wrong with that either. It’s really common, especially in the city, for guys to get manicures and wear designer clothes, etc.

But maybe he is gay. If so, help him feel like it’s okay to come out of the closet. Sure it might hurt a little for you, depending on how deep a relationship it’s been. But if you love him, then you won’t want him not to get to be his true self and be miserable the rest of his life. Help him out, and you might even be able to remain close friends.

It can be a tough situation, so your best bet would simply be talking to him. But if you don’t want to jump the gun, be a little more sure before bringing it up. Here are just seven ways to tell if your boyfriend is gay.

One sign that you can easily observe is whether or not he’s a little more friendly with guys than your average straight male. Sure “bro” hugs, fist bumps, and high-fives are a common thing, but I’m talking a little more handsy. Things like, does he touch their thigh when sitting down, or gently grab their arm during conversation? Does his hand linger on their shoulder or do their hugs seem drawn out a lot longer?

If so maybe it’s because he craves a male touch and is trying to enjoy it for as long as possible without being too obvious.

Guys are known for checking out other people. It doesn’t even matter how committed a relationship they are in. Sure, girls can be guilty of this too, I’m no saint myself. But for guys, it’s a subconscious thing.

So that being said, who is your man subconsciously checking out? Which eye-candy causes him to pitch a tent? Is it the cute busty waitress in the tight miniskirt, who might even be making you temporarily question your sexuality. Or the bearded bartender hunk who makes you want to do questionable things right then and there. Chances are if you’re checking out the same person. One of you is a little gay.

Other questions to consider about your shared sex life include:
Does he like it when you do things to his butt? Do you own a strap-on? Does he only like doing you from behind? Has he tried to involve another man in your sexual relationship?

Or maybe things are more along the lines of not being motivated to have sex anymore, not being able to get it up or get aroused. Does he seem less passionate or into you than before? Is he scared of your vagina? Does he try to stay away from it and avoid things like eating you out?

Again I stress talking it out; it could be that he’s in a sexual slump or is just really kinky and isn’t sure on how to bring that up in conversation. 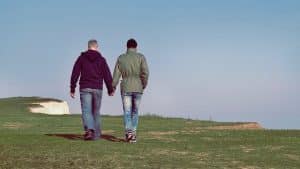 Who he looks up to can help you figure things out a little as well. Does he like more flashy celebs like Madonna, Lady Gaga, Cher, David Bowie or Elton John? Does he stay up to date on celebrity gossip and all the hottest trends so he can channel his inner Ryan Seacrest?

It’s not a sure fire way to determine if he’s gay or not, but it’s more likely than someone who is into politicians, businessmen or athletes and doesn’t know any celebrities.

Now I’m not saying to invade his privacy… But does he have any secret social media pages? Have you seen him on any gay dating sites or apps like Grindr?

Try taking a look at his friends: Are there a lot of guys that he doesn’t know? Do they have very revealing profile pictures? Are they posting on each other’s pages or tagging each other a lot? Is he always texting or messaging them? I’ve found that straight or gay. Usually, the ones that are constantly tagging each other and messaging in extreme amounts behind your back have been the ones cheating. But that’s just been my personal experience, take what you may.

What are his friends like? Are they very stylish or flamboyant? Openly gay? Does he spend a lot of time at a particular friend’s house without you? Who you are friends with can tell a lot about you. The kind of hobbies that they are into, the things that they do as a group, are there a few girls in the mix or is it a guy only club? All good things to consider.

That being said, I’ve known straight people who are flamboyant and gay friends who are some of the manliest guys I know. Sporty, muscled, and love a tasty craft brew. 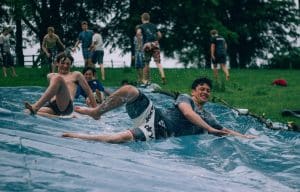 So again, I must stress that it’s hard to go off of stereotypes and that there are so many sexual preferences nowadays. Your best bet is straight up to figure it out together. Sure it’s a crappy situation to be in because by asking, it’s almost like risking it all. Especially, if they aren’t gay and get offended that you’d even ask. But like I said, it’s a risk.

Use your judgment, wait for the right moment, don’t ask without some proof or example. When you do bring it up, it’s important to make sure that they realize you aren’t attacking them, but rather trying to help them out of the closet because you love them.

Maybe down the road you two can go shopping, treat yourself to a spa day and laugh about the whole situation and then gossip about both of your cute new boyfriends together.