7 Things Not To Tell a Woman During a Fight

7 Things Not To Tell a Woman During a Fight

“Raise your words, not your voice. It is rain that grows flowers, not thunder” – Rumi, the ancient poet

No matter how in sync or in love you are, disagreements with your partner are inevitable. Yes, it’s painful but sometimes unavoidable. In fact, psychologists say that the occasional argument is a sign of a healthy relationship.

However, when emotions are running high, it is easy to hurl hurtful words. Before you know it, a snarky comment turns your living room into a battlefield where people can get seriously hurt. Guys, if you get into an argument with your lady, it’s best to choose your words wisely. Here are a few phrases to completely avoid, so you steer clear of that treacherous path.

When you say this, it lets your partner feel like their opinions are not valid or valued. “People will always get in trouble when they’re aiming for ‘I’m right, you’re wrong,’ ” says Susan Heitler, Ph.D., a relationship expert, clinical psychologist and author of From Conflict to Resolution. Instead, she suggests that you acknowledge your partner’s perspective and follow up by adding your own. Instead of dismissing her, making her feel belittled or disrespected, tell her you to understand what she’s saying and “…you could also look at it this way.” With this approach, you both voice your opinions, and it creates a more collaborative environment. This can de-escalate the situation and allow you to work it out together.

2. Generalized Complaints That Could Offend Your Partner

When you start a criticism with the words “you always” or “you never,” it makes the other party defensive. These blanket statements are usually inaccurate. It is much wiser not to do the finger pointing but focus on a genuine concern of yours.

For example, you could say, “I’m worried we are going to get broken into…” instead of accusing your partner of always leaving the door unlocked when she comes in from work. Or, instead of complaining that “I’m always making the romantic gestures,” you could say you’re concerned that she is getting bored with the relationship. That approach will make way for a conversation and nudge her gently into making changes, instead of shutting down.

3. Comparing Your Woman To Another Person

This one is an absolute low blow. Sometimes you desperately want to see a behavior adjusted. Other times you are genuinely put off by something your loved one repeatedly misses or does in a way you do not appreciate. However, you open a can of worms by bringing someone else into the picture, especially if you compare her to mom or an ex. Instead, plainly state what you would like to see her do, or stop doing. For example, she chronically under-seasons food, and you somehow end up arguing about it.

Do not mention that your mom would have used Maggi cubes. Tell her to try out some Maggi cubes and bet that she will love it. Or, if she makes fun of your role-playing fantasies, don’t say “my ex never made fun of those.” Ask her to have an open mind and let her know that her reaction is offensive. Comparing her to another person will drill holes of insecurity into your relationship.

As we all know, this comment usually only aggravates the situation. This is a way of saying “I don’t want to be aware of your negative emotions.” This makes your partner feel unsafe expressing herself with you. If you are not getting why she is so upset, ask her to explain. This is more disarming that dismissing her anger as an overreaction. 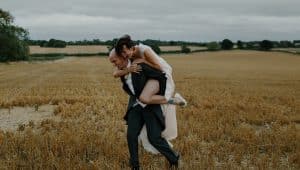 This pattern of speaking is somewhat condescending. It dismisses whatever your partner just said. It says, I’m not listening to you, but you should listen to me. People desire respect from those they love. Instead of overriding her comment with your own, say “Yes that’s great babe, and…”This will show that you do respect her opinion, even if it not the same as your own.

6. Shutting Down The Conversation

Arguments can be stressful, and you might want to avoid it if you’re particularly tired or busy. But once a fight is underway a force shut down does not fly. Instead, ask for a temporary recess. Shutting her down is way worse than admitting: “I can’t do this right now.” Ask, “Can I process my thoughts and come back to this tomorrow”? In doing this, you acknowledge the importance of the issue to her, so she does not feel brushed off. You are also giving yourself room to breathe. It’s a small win-win.

Sometimes your girl can work your last nerve. Nonetheless, resist the urge to insult her with derogatory terms, even if she is dealing low blows. When you resort to name calling, it is no longer constructive and does not solve anything. All it achieves is wounding the other person. A better approach is to state how she is making or has made you feel. So, instead of saying “you’re such a #$%*&!” for throwing out your video game, say that she has no right violate your property and that it made you very angry.