Aries Woman Taurus Man Compatibility could be a perfect or fatal match, balancing each other well; but the temperaments of these signs could easily clash. However, with a bit of work and compromise, this combination could be a successful, long-lasting bond. Aries is always energetic and fast-paced, whereas Taurus is more of a relaxed nature. Aries and Taurus compliment each other well because of the leadership qualities of Aries, compared to the follower nature of Taurus.

Taurus’ are very mature and stable in themselves, whereas Aries is a very reckless and adventurous sign. An Aries woman is very confident in herself. Therefore, she does not allow anyone to dominate her in an Aries Woman Taurus Man relationship. She likes to be the leader, and her need to succeed will often cause her insecurities. These insecurities could result in Aries being stand-offish, often determined to be right. However, a loving, dedicated partner is just what she needs to balance her out. She is easily jealous and needs the full attention of her significant other. But when provided with the love and affection she needs, she is an amazing lover and partner.

A Taurus man is very mature and has his feet on the ground. He likes sensibility and maturity and is cautious when entering into an Aries Woman Taurus Man dating. He likes a woman who has something to offer him and will only pursue a relationship when he believes it will have a positive effect on his life in the long run. When he finally takes the plunge, the Taurus man is very loving and loyal and will do anything to make his partner happy. Taurus men are a brilliant source of stability and comfort- their maturity makes them perfect long-term partners. They are patient and committed when they allow themselves to open up.

Taurus men are a brilliant source of stability and comfort in an Aries Woman Taurus Man marriage. Their maturity makes them very good long-term partners. They are patient and committed when they allow themselves to open up. However, they are not very adept leaders, sometimes making them appear weak on the outside. Taurus men prefer a strong woman of their own, who is not too dependent on them for everything.

Aries are often drawn to adventure and love faced-paced environments. Taurus however, are more steadfast, and this is exactly what an Aries needs. A Taurus will ground an Aries in the right ways and will be the “grown-up” of the relationship. The Aries will lead the Aries Woman Taurus Man love compatibility. This is because of their commanding personality. Luckily, this isn’t a problem for the Taurus, as they prefer to follow somebody else’s lead. This doesn’t mean that the Taurus is weak, it is just the preferred power dynamic for them.

An Aries woman will demand a high level of attention from a potential partner, and needs a strong sense of security and exclusivity. Luckily, the Taurus man is incredibly dedicated to his partner and will treat her like a princess. Taurus men are very generous and caring and like to provide for his significant other. This is perfect for an Aries Woman Taurus Man commitment.

The Taurus man is fiercely loyal and likes to feel as if he’s protecting his loved one. Despite not being particularly socially adept, when he feels comfortable with someone, he will lavish them with luxury. The Aries woman will particularly appreciate this, as she loves to be treated like royalty.

A Taurus is very conscious of their money spending habits, compared to the wasteful Aries. This will be great for improving their Aries Woman Taurus Man savings. The Taurus man will help Aries to mature, and provide a sense of stability. The Taurus will improve the maturity of the Aries, and teach them a few lessons of how to keep their stability, as this is something that Taurus values greatly.

Despite being strong-willed, the Aries will eventually begin to learn, and more often than not, improve for the sake of their partner. The Taurus will be a steady rock for the Aries Woman Taurus Man union.

Aries women are often very spontaneous and aggressive in the bedroom, usually preferring fast-paced and exciting encounters. However, a Taurus man is usually more sensual, preferring “love making” so to speak. This is not a bad thing, however, as both signs will come to appreciate each other’s preferences. Therefore, will find a good balance between the two. Sensuality and spontaneity will combine, resulting in a brilliant Aries Woman Taurus Man sexual experience. Variety is key in this partnership. The Taurus and Aries are a relationship which is built to last. 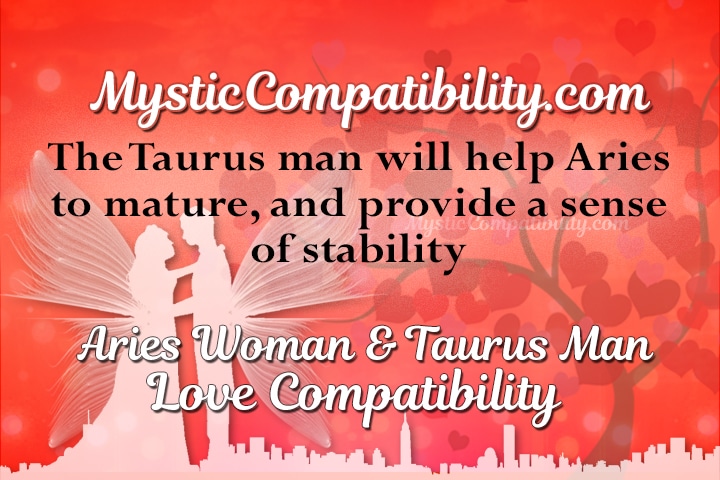 Despite the eventuality of this Aries Woman Taurus Man partnership being good, the beginning could be very rough. Aries need plenty of mental stimulation, which a Taurus could struggle to provide at first. Think of it as Aries being a sports car, and Taurus is a rusty lemon of a car. As time goes on, both parties will learn to compromise eventually, but as they try to get used to each other’s speeds, it could be hard. Both signs are very strong willed, so this process may take more time than they’re used to, but the results are worth it.

Aries are often reckless spenders, which could aggravate the frugal Taurus. The Aries could be persuaded to be more cautious, but it could also result in arguments about money. A Taurus loves stability and maturity, especially regarding careers and money. The Aries likes to follow their heart and enjoy the money they have, which could cause extreme stress for their grown-up partner. This is usually the Aries Woman Taurus Man downfall. But, if this hurdle can be overcome the relationship will be fruitful.

Again, maturity is something that is important to a Taurus man. The Aries woman is often very carefree and independent, preferring to go on an adventure than stay at home on the couch all day. Taurus however, would much prefer to cook dinner together and eat it at a dinner table while making conversation about business, money and material possessions. This could be a clash of interests, but could also become a clash of eventual life goals. This could mean a good balance of maturity and fun within the Aries Woman Taurus Man relationship. Or, it could mean arguments and constantly doing separate things- rather than living their lives together. This difference in interests could mean that a Taurus man strikes an Aries woman as boring. However, if the pair cares about each other enough, they will learn to compromise.

Aries Woman Taurus Man sex at the start of the relationship could also be difficult for this couple. Aries will prefer explosive, spontaneous sex whenever, wherever, whereas Taurus would prefer a sensual experience after a nice meal. Despite a compromise resulting in a brilliant night, if either sign chooses to dig their heels in about their preferences, the other sign will be unsatisfied and bored.

The key to the Aries Woman Taurus Man love compatibility is a compromise. Despite both signs being very independent and like to stand up for themselves, if they can both learn to open themselves up to trying new things, this relationship will work brilliantly. Aries will enlighten Taurus to new experiences and adventures, releasing the inner child in them. Taurus will ground Aries, teaching them all kinds of new things about stability, and the benefits of maturity.

This Aries Woman Taurus Man compatibility may have some communication problems. But, this relationship is one will last after sorting these few issues. The start of this relationship could be rocky, but as time goes on these signs will improve each other in the long run.