A Gemini woman is incredibly carefree, always choosing fun over responsibilities. She has a zest for life, and will never fail to inject a little bit of fun into every situation. She is a natural-born optimist, and every day is a new adventure for her.

Speaking of adventures, the Gemini woman will never experience a dull moment. She adores exploration, and can never stay in one place for long. She will attempt to escape every place, desperately trying to change her environment to prevent her from getting bored. This may translate into her relationships, as she can be known to cheat in an attempt to regain her independence. Especially when she feels trapped in a relationship.

This is not always the case, and one shouldn’t judge her based on this assumption. Anyone wanting to get into a relationship with her should bear this in mind. She is not one for long-term, serious relationships, as these make her feel tied down and uncomfortable. As well as her need for change, she also has a thirst for knowledge. For every environment she puts herself in, she has a longing to understand her surroundings and the people within it.

The Gemini woman may ask a lot of questions in an attempt to broaden her knowledge, but this may appear to some people as her being nosy. She is not much of an emotional person and isn’t fond of emotional outbursts. She is not for any man who needs a strong support figure, as she lacks certain stability. The Gemini woman may sometimes struggle when it comes to taking care of herself in simple ways. Activities such as getting enough sleep, eating, drinking enough water, etc. are difficult for her. This is because she is constantly planning new adventures and trying to tackle more challenges.

The Pisces man is perhaps the most emotional of the zodiac signs. They tend to prefer a more hyper-realistic view of the world, which can become a sort of dream world. A Pisces man sees everything more optimistically than most people. This is one of his more positive aspects.

They hate the reality of how scary the world is. The Pisces men will usually choose to use escapism as a coping method. One extension of this can be drugs- a Pisces man is the most prone of all the zodiac signs to venture out into the world of hallucinogenics, etc. , as they want to see things is the way that they imagine them. They have a fear of the world around them, so often choose to escape them via these means.

A Pisces man also tends to be afraid of confrontation, and he may become modest and reserved than the average person. He is highly emotional and sensitive, sometimes meaning he tends to see himself as a sort of Prince Charming. His skewed view of the world can lead him to believe that everything is a fairy tale, and this will reflect on his relationships. 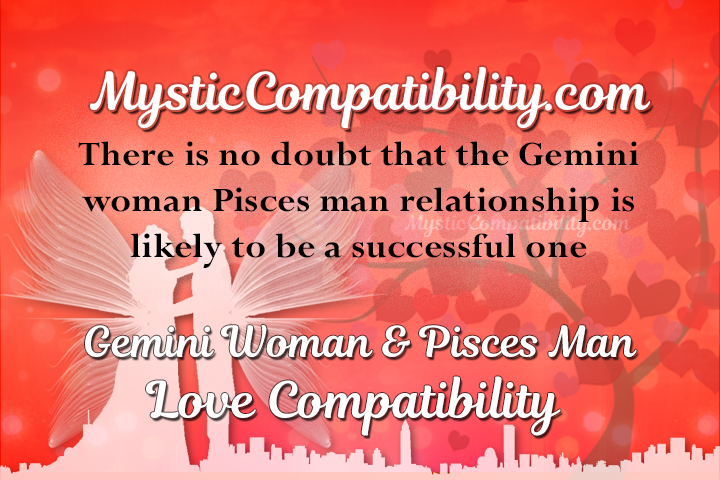 He may believe that his romantic attachments need to be perfect, like a storybook tale, featuring his beautiful princess. Obviously, this will not always happen, and he is not somebody who is prepared for disappointment, so this could break his heart. He needs a woman who can provide him with some emotional stability. A woman to keep him on the right path- providing him with a mix of idealistic views at the same time as real ones.

The Pisces man dating Gemini woman often tends to find himself dreaming of what he wants to make of his life, while she goes out and gets it. This could be a positive influence on the Pisces man, as he learns how to take the first step to achieve his goals. Instead of dreaming about things, he will be taught by the Gemini woman just how much can be accomplished with a little bit of effort.

This can be a sad Gemini man Pisces man love compatibility, because of the Pisces man’s need for emotional connections. He is out to find the love of his life for his very own happily ever after. The Gemini woman, on the other hand, is looking for a bit of fun. This may lead to disappointment for the Pisces man. The Gemini woman may not realize that she has hurt him.

The Gemini woman may not even find the Pisces man particularly attractive because he lacks the energy and charm that she tends to look for in a partner. He feels the same way about her- as she is usually much too energetic for him in the Gemini woman Pisces man affair. He likes to be taken care of by his partner. The Gemini woman, however, loathes the idea of being tied to somebody else.

She is the type to avoid having children for this reason too. She prefers to be free from responsibility, which is what the Pisces man will seem like to her- responsibility. The Gemini woman Pisces man marriage compatibility also struggle greatly when it comes to trust.

The Pisces man relies on his Gemini woman for any stability. With her constant need to be on the move and stay as far away from him as possible, he may start to feel rejected and alone. This will also cause him to have a lack of trust as he lacks the special connection he would like to have with her.

She will have a general dislike for being around him because she feels as if he is a child that needs looking after. He will exhaust her, and she will become tired of his presence.

The main problem lies in the Gemini woman Pisces man relationship when it comes to what they need from each other. They will be unable to satisfy each other’s needs. They will eventually only do each other harm. The Pisces man will be hurt by the Gemini woman’s uncaring demeanor, and she will feel trapped and restricted by his intense need for emotional support.

The Gemini woman Pisces man love compatibility is not an advisable one, as these signs tend to annoy each other to the most considerable extent. They have things to teach each other. But only in situations where the pair hasn’t already developed enough hatred for each other to refuse to listen.