Pisces woman Libra man compatibility relationship can be either full of love or confusion about each other. Pisces woman has a very sharp mind and strong intuition. Libra man is very social and open towards other people. There are not many things they have in common. Their elements- Water and Air are opposites. The good connection between develops, because Pisces exalts the ruling planet of Libra- Venus.

As an Air sign, Libra man lacks connection to his emotions. A lot of aspects of his life are very superficial. Pisces woman can encourage Libra to grow his emotionality and sexuality. If he will be accepting towards her suggestions, this Pisces woman Libra man relationship can reach a new, deeper level of understanding.

Communication in the Pisces woman Libra man dating is good if they remain respectful towards each other. They don´t understand each other´s way of thinking. For this couple, it is best to listen to what the other partner has to say and simply accept it. If they want to change things about each other, it will not lead to a positive outcome. Libra man enjoys the optimism of Pisces woman. He doesn´t always understand her actions, but he should accept that it is just the way she is. Pisces woman might think Libra is quite boring, but she appreciates his intelligence and determination.

Both Pisces woman Libra man star signs are looking for love. That makes them being together feel good. These partners will take good care of each other. It is important for them to know that their partner is satisfied. Libra man enjoys the stability Pisces woman can give him. Pisces woman will enjoy the spontaneity of Libra. Although this woman loves the peace of a quiet life at home, she needs some excitement from time to time.

Pisces woman likes to live in her inner world. She is an introvert persona and prefers non-verbal communication. In social events, Pisces will rather want to observe people, not talk to them. Libra man will be disappointed with her because Pisces can´t satisfy his need for socializing. For Libra man, Pisces will seem unreachable. She is too carried away with her world of dreams, and Libra man can´t follow her.

If Libra accepts that Pisces will rather listen, than talk, they can have a good time with each other. Still, Libra man will always be confused by Pisces woman. She is a very spiritual person, and her words always have a deeper meaning. Libra man will be left confused about what she has meant. It is hard for him to understand this woman.

Pisces woman sometimes needs to be completely own, to deal with her emotions. This will not be understandable for Libra man, who is always in need for company. If they want their Pisces woman Libra man love affair to move in a positive direction, they will have to make some compromises. Pisces will have to join in on Libras social life. She can´t always stay home or make Libra be home just with her. This man has a lot of friends, and his attention is divided between his friends, family and his partner. 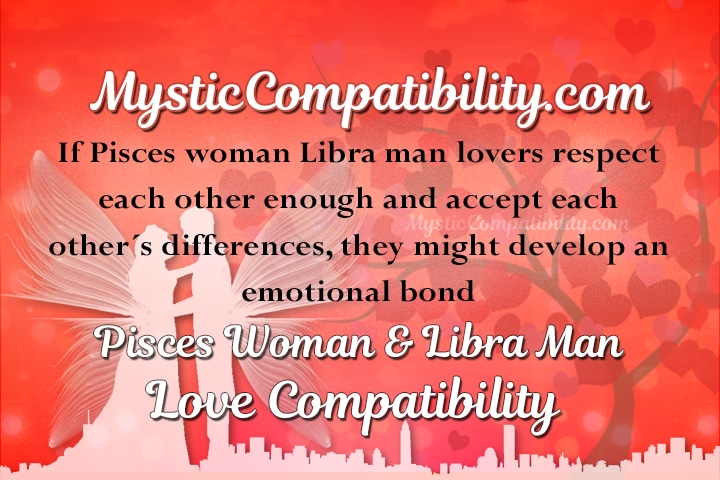 This man has to understand how much effort it takes from Pisces to be open towards other people. It is not easy for her to be a social butterfly, as it is for Libra. She wants to make her partner happy therefore she will try. Libra just has to accept that she is trying and appreciate the effort.

Pisces woman Libra man horoscope signs have a completely different speed of life. That can be observed in many aspects of their relationship. If Libra falls in love with Pisces, it will happen quickly. He will show off all his love. Pisces woman is more suspicious, and she doesn´t appreciate him being so bold. When it comes to their sexual relationship, Libra will want excitement and spontaneity. Pisces woman enjoys tender lovemaking. It will be hard for this man to pace himself. For Pisces, it is going to be almost impossible to keep up with Libra.

Pisces woman needs someone who can give her some direction. Libra man is not going to be someone who tells her how to become better. Libra himself is very indecisive. He also would benefit more from a partner who takes the lead in the relationship. With this man, Pisces can get even more lost in her fantasies. If the Pisces woman Libra man zodiac match want to do something together, it will take forever to make a decision. Pisces woman doesn´t know what she wants. Libra man is afraid to miss out on something, and it will be hard for him to make any decisions.

Because of all their differences, it is hard for this couple to build trust between them. The Pisces woman Libra man love match simply don´t understand each other, and that is a cause for many misunderstandings. Pisces woman is interested in finding the answers to mysteries of the world. She sometimes can get carried away with some person that she finds interesting. Libra man can interpret as being disloyal. Libra man doesn´t have very high self-esteem. He is looking for approval from other people. Pisces woman will not understand why he is acting that way. She doesn´t see past the superficial things about this man. Lack of understanding will make them feel like they have been betrayed. If there is no trust, the Pisces woman Libra man relationship will soon end.

This relationship is kept together by the influence of Venus on both of these signs. Despite all their differences Pisces woman Libra man soulmates can have a great connection. They need to accept their differences and develop respect towards each other. If they focus on the positive things in this relationship, they can develop feelings for each other. The sexual connection between them is powerful.

With enough patience and effort, they can make the Pisces woman Libra man compatibility relationship work. Still, these people have a completely different pace of life. Pisces woman is dreamy and mellow. She is an introvert personality, and she doesn´t care about the material issues. Libra man is a fast acting man. He is looking to prove himself and get approval from others. It is hard for them to understand each other´s actions. That can lead to many misunderstandings and end of this relationship.