Pisces woman Capricorn man compatibility couple can have a wonderful relationship together. First of all they will develop a strong basis of friendship. With time that will allow them to grow deeper emotions for each other. The ruling planets of Pisces and Capricorn- Neptune and Saturn have a good compatibility. Pisces woman exalts Venus therefore she is very in touch with feminine energies. Although Capricorn might seem very rough, he also has a gentle side. It will be a very interesting journey for the Pisces woman Capricorn man lovebirds to get to know each other.

Pisces woman Capricorn man dating both have introvert personalities. It is not likely for them to meet in social gatherings. They will most likely be introduced by some friends or business connections. Because of that, they will have some things already in common, which will make it easier for them to become romantically involved. Pisces woman likes socializing and going out, but she rather spends time at home with her partner. Capricorn man is also a homeboy. They will provide each other with a lot of comfort and warmth.

From the very beginning of this Pisces woman Capricorn man relationship, Pisces woman will feel like there is more to Capricorn man than he shows other people. He will be a challenge for this woman. Pisces enjoys all the mystical things in life, and Capricorn has some mystery. Capricorn man will also be very interested in being with her. Her company is very soothing and supportive, and it is just what this man needs. Pisces woman understands the complicated character of Capricorn man, and she will love him for it.

In the Pisces woman Capricorn man love affair, both partners will want to take things slow in this relationship. They both appreciate simple things in life, like security, love, and friendship. If Pisces woman is in love, she doesn´t care what her partner does for work or where they live. The most important thing for her is to maintain positive emotions. Capricorn man is very responsible. He will certainly take care of all their living and financial arrangements. Pisces woman will inspire Capricorn to do more. She will be the one to create a perfect home for them both and support Capricorn in all his efforts. Her loving and caring nature will warm Capricorns hear, and he will do anything for this woman.

It takes a while for the Pisces woman Capricorn man partners to develop an emotional contact, but it grows with every day. As an Earth element, Capricorn is not so in depth with his emotions. He is patient and calm enough to deal with Pisces constant mood changes. Pisces woman feels comfortable enough with this man to let her feelings flow freely. She can talk with him about all her emotional ups and downs, and Capricorn man will truly listen to her. This will help him to get more insight into the complicated inner world of this woman. They have a good balance between emotionality and rationality.

Their Pisces woman Capricorn man sex life can be very satisfying for both partners. Capricorn man is likely to take the initiative. Capricorn will definitely not be as emotionally involved in their sex life as Pisces is. He will have to constantly remind her that she is the only woman in his life for Pisces to feel comfortable. Once she feels safe, they will have an amazing contact. Pisces is creative and she will make a lot of exciting experiences for Capricorn. This man is not sexually as secure as Pisces is, therefore she will have to be careful to make him feel comfortable. She has a very strong intuition and it will not be hard for her to sense if anything is wrong with Capricorn. 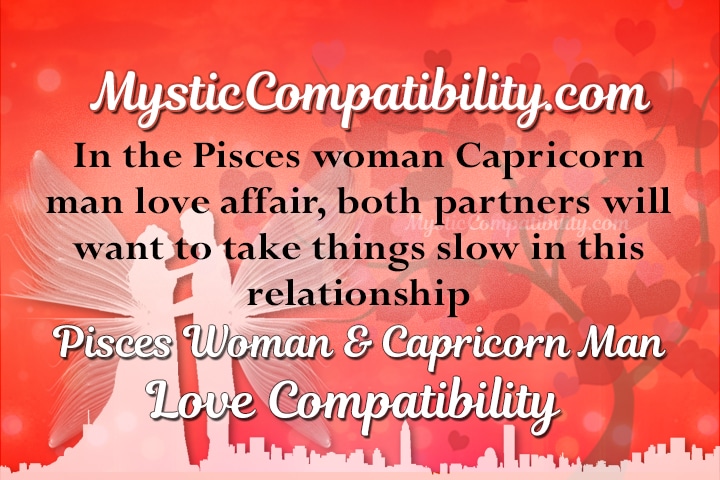 To fully enjoy the company of Pisces, Capricorn man will have to loosen up his firm beliefs. Pisces woman Capricorn man relationship can be a wonderful journey if Capricorn is willing to let go. It is hard for him to change his opinion or way of doing things. Pisces woman often questions his actions. As a mutable sign, she can cope with Capricorns stubbornness, but she rather wants to see some change in him.

Capricorn man sometimes might seem to be too boring for Pisces. Although Pisces woman Capricorn man sun signs both love to spend time at their home and just be with each other, Pisces need something more. She can get tired of the Capricorn’s routine. Capricorn is very serious and grounded man. It is important for him to stick to his routine because it makes him feel safe. The fact that Pisces woman is hopeless when it comes to real life problems makes him even more stressed out.

Capricorn doesn´t mind taking care of this woman, but he would feel more comfortable if there was some consistency from her. While he is worried about their everyday issues, Pisces will get carried away in her dream world. She can plan vacations, their future home or other things, that will seem impossible for Capricorn. Pisces woman Capricorn man soulmates need to find understanding about these aspects of their characters. Pisces has to appreciate the work Capricorn does. He has the best intentions in his mind. If she continues being dismissive towards him, Capricorn will not be able to tolerate her. This man sometimes needs to let go of his seriousness. Taking a break and doing something spontaneous together with Pisces can provide him with new energy.

When they share common activities, both partners will need to be very patient. If Pisces woman Capricorn man lovers share similar interests, their approach might be completely different. For example, they both enjoy traveling. Capricorn man will plan everything. He will choose to go somewhere he can relax and also learn something new. The ideal vacation for Pisces would be to buy tickets to anywhere and just go without a plan.

The different approach to these things can be very frustrating for both partners. Pisces woman sometimes feels like she has to push Capricorn to do things with her. Capricorn, on the other hand, feels like she is a child that needs constant adult supervision. It is not going to be easy for them to balance their characters. But with enough time and effort Pisces woman Capricorn man marriage might succeed.

Pisces woman might find her perfect man in Capricorn. It will certainly not be easy for them to find each other, because of their introvert natures. But once they do, this Pisces woman Capricorn man couple will connect instantly. It takes time for them to make this relationship strong. They both will attend to each other with caution. With each passing day, they will be able to trust each other more.

The trust they share will make them feel comfortable with each other. Pisces will soon realize that she can completely trust this man. Capricorn is never wishing to hurt people close to him. He has a very calm and caring nature that will be the best support for Pisces. This woman will be an inspiration to Capricorn man. He is always very serious and determined. If Capricorn accepts Pisces just the way she is, he will experience some positive changes in his life. With enough time and acceptance towards each other, they can develop a lasting Pisces woman Capricorn man compatibility companionship. This can be the dream relationship that Pisces woman has always searched for.