The Libra man is usually born between September 23rd through October 22nd. However, the beginning and end dates of this sign can sometimes change based on the year. To know if a man is really a Libra or not, he should check the Libra zodiac dates.

The Libra man is represented by the symbol of the scales. This symbol perfectly describes him because he likes to keep his life as balanced as possible. He stays in his own lane and does his best not to cause drama in any of this relationships. However, the Libra male will try to stop drama between friends and family members at times. He likes to live a simple, but fun life. His intelligence gets him through life, and so does his creativity. The Libra guy is a wonderful friend, and anyone would be lucky to have him in their life.

Libra men are highly social creatures. They love to flirt and have a good time. This makes it easy for these men to attract potential partners to them. The Libra man likes a healthy mix of flings and steady relationships. He will keep things casual with sexy partners who he does not have much in common with. But he will try to make things more serious if he feels a real connection with someone. No matter what type of relationship he is in, Libra man in love will not be likely to cheat.

Libra men in bed like to get creative when it comes to having sex. He will want to be with someone who is just as creative as he is. He loves to try new things, and he will become bored if he is with someone who does not feel the same way. Out of all of the zodiac signs, Libra is one of the kinkier star signs. He loves to do strange things, but he will always talk to his partner beforehand to make sure that they are okay with what he wants to do. He is always welcome to new suggestions from his partner as well.

The Libra man traits show that he can be happy working just about anywhere. He just needs to get to use his brain, his creativity, or his communication skills. Without at least one of these aspects, he will be unhappy. A job that incorporates all three of these aspects will be the best job for him. Some great job for this sun sign is teaching, being an artist, writing, anything to do with social work or anything else that the Libra male can have some fun with. 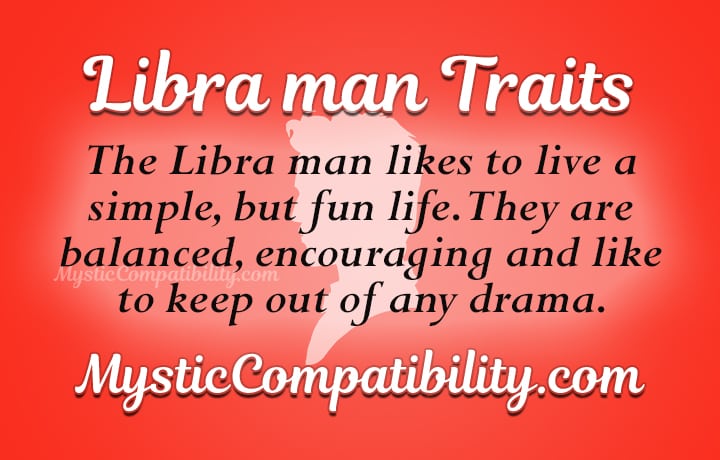 The Libra man personality goes between saving money and splurging to buy things that he doesn’t always need. He is likely to save his money for most of the year, only to spend it on large expenses. He may reward himself for his great money management skills by buying things he doesn’t need, which is a little ironic at times. However, he does always make sure that he has enough money to pay for his basic needs. He will never be caught off guard by realizing that he has no money left in the bank.

The Libra man characteristics show that he looks for balance in all parts of his life, especially when it comes to his health. Libra men often go about their fitness in two different ways. Some Libra men will balance out their diets and workout routines to stay healthy. Other men will either eat a lot and then exercise a lot later to work off the calories. While others will only eat a little so that they do not have to work out much. Either way, most Libra males end up being fit, or at least healthy, as they do this.

The lower back is the main ruling body part for the Libra man personality. This means that these muscles are usually stronger on Libra men than they are on men of other zodiac signs. However, this can also mean that they are more prone to injury than this area is for other sun signs. Libra men will need to be careful so they do not strain this area of their bodies.

A Libra guy is one of the greatest friends that a person could ever have. He is charming and friendly. He is not one to make friends just to make his own reputation better. Instead, he only makes friends with people who he genuinely wants to hang out with. He is open and honest with his friends. The Libra man traits show that he is willing to listen to his friends who are willing to be open and honest with him in return. He is always loyal to his friends, and he only wants the same from them.

The Libra man loves to spend a night out on the town his friends, but he also enjoys spending a night indoors. Although, sometimes he needs some time to himself. It’s not that he hates spending time with some of his friends, it’s just that he needs some alone time to recharge his batteries. Once he is recharged, he will be sure to be ready to party once again!

If the Libra male ever becomes a father, he is likely to give his children more freedom than some of the other astrology signs would give their children. He wants his children to be able to make their own choices in life. He doesn’t want to be the type of parent who bosses his kids around. Some may notice that he acts more like a friend than a parent, but he is okay with that. The Libra man may struggle to find a balance in this area of his life, but what parent doesn’t?

The Libra man personality traits show that he keeps his style somewhere in between casual and classy. At times he changes his wardrobe to match with whatever event is going on around him. But for most of the time he just keeps his outfits at a point where he does not look messy. But he doesn’t look like he is dining out with royalty, either. He does keep an eye out for what is trending, though. He wants to be in style, even if he may sometimes pretend that he doesn’t care what others think of his sense of style. The Libra male tends to wear light colors, which he also tends to look the best in.

The Libra man likes jewelry in small amounts. Little accessories like cuff links and watches will catch his eye. But he is not likely to be a fan of necklaces or bags. He is likely to like more expensive jewelry more than the cheap stuff, even if he can’t always afford it. He is not likely to blow all of his cash on a nice ring, but he may save up for one if he wants it bad enough. This is just another way that the Libra man balances out his fashion statements.

The Libra man is the perfect middle man, he has the best of both worlds. He makes a great friend. He is sure to encourage everyone who he meets to try to balance out their lives in the best possible way!