Libra man Pisces woman compatibility is potentially not a very healthy one. Both are relatively idealistic. He is notably on the lookout for perfection from his partner. She lives in a fantasy world to escape from being emotionally hurt. They will never intentionally hurt each other. Nevertheless, none of them is equipped to help the other when drowning with emotions.

The naïve Pisces woman can at times become lost in her own thoughts. The stable Libra man will be the one that has the ability to ground her. They will easily be attracted to each other. Mutually, they prefer an environment that is soothing and comfortable. Each of them will idealize and easily understand the other’s needs. The romance found in the Libra man Pisces woman sun signs is founded by their believe in true love.

The Libra man is sentimental whilst the Pisces woman is emotional. He is insightful, so will be able to understand her volatile moods. When things get really bad for her and she is deeply depressed, she won’t often share what she is feeling. It won’t be easy for him to tolerate her volatile outbreaks but will require a lot of patience. To keep the peace, he will find that more often than he would like, he will need to give in to her in order to avoid an argument.

There will be a lot of tenderness in the Libra man Pisces woman love compatibility. They will live in a fantasy world of happiness. He will always want to talk through their problems and find amicable solutions to them. The quiet Pisces woman will want to escape facing their issues. She will utilize any escapism technique that helps her avoid it. The steady Libra man deals with his broken heart in a proactive way. Whereas the insecure Pisces woman misunderstands his strength and thinks that he is not hurting at all.

Neither the Libra man nor the Pisces women are relatively honest. He will choose the road of less resistance and she will lie with the best intentions. Ultimately they are able to create a robust Libra man Pisces woman relationship that works well when things are stable and calm. When things are heading into a dark and depressive environment, the relationship can fall apart quite suddenly. One of their biggest challenges will be the communication between them.

The Pisces woman is quite complex that she fails to easily identify who she actually is. The Libra man will have to be cautious at times and resist adding logic to what she is experiencing. He is known to relish the challenge of applying logic to everyday experiences. She can at times be very preoccupied with morbid thoughts and negative internal issues. He is not far behind when it comes to sexual stimulation, as he can also have some strange ideas.

This caring Libra man Pisces woman couple will always want to make themselves available to all their friends and family. Especially when they are sought out for a shoulder to cry on. Their friends will see them as amiable and a tad naïve at times. Neither is deterred when the other reveals their inner desires, being comfortable to express their innermost off-limits fantasies. They will be sincere in their love for each other on an emotional and spiritual level.

Libra man Pisces woman compatibility suffers when they are unable to soothe the heartbreaks they go through. When faced will reality, their relationship has the potential to crumble. Their compatibility will suffer when health and finances issues become problematic. Although both of them will do things to work towards a successful relationship, their lack of forthrightness will cause real problems. If Libra man Pisces woman love match are open and honest with each other, they will have a good basis to go the distance.

Passion for the Libra man Pisces woman in love will be spontaneous and deep. She will be the one that makes it all happen, and he will be a willing partner. Their initial meeting will be devoid of passion, but as they get to know each other and what works for them, they will easily comply to ensure the other is completely satisfied within their relationship.

Libra man Pisces woman sex will be about them constantly finding different ways to please each other. They will excel in the fantasy play between them. There will be many hours of fun and exciting playing out their fantasies. They will create a comfortable and stable home environment, to bring about a loving and playful sexual encounter.

Marriage will be lots of romantic breakaways, and special moments between them. Having children will upset the balance in their Libra man Pisces woman marriage. Hence, they should carefully consider the implications thereof. Their home will be their haven and any change will disturb the balance. In fact, the homely Pisces woman will prefer to stay and perform all her chores instead of going out and meeting new people. The Libra man is very social and will then go out without her. At first, the Pisces woman will graciously not complain. She will prefer him to be at home with her. For this marriage to work, she will have to find a way to either accept him going out without her or make an effort to join him. 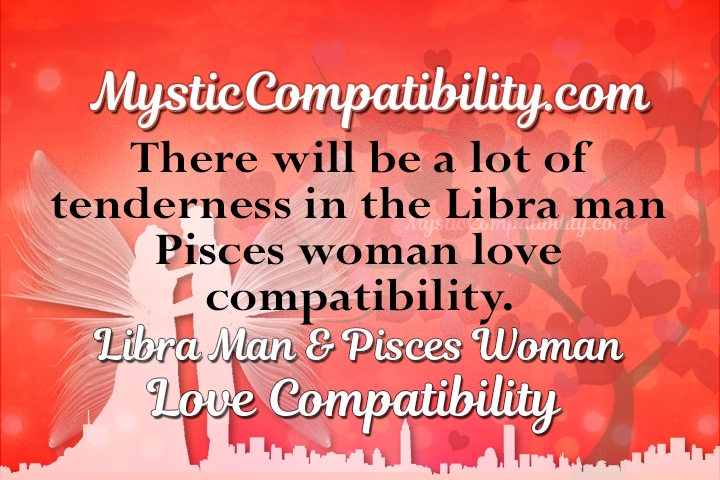 The strong Libra man will take control of their courtship. He will ensure timeous notice of intention to pursue a relationship with her. His tact will ensure that he takes note of her need for an advance warning for dinner dates. She will be introduced to his friends, and feel completely special.

The Pisces woman is very imaginative and will enjoy hours of fascinating conversation. Boredom will not be part of the Libra man Pisces woman zodiac match at all. The unselfish Pisces woman will freely give of herself. When the Libra man is able to improve her confidence, she will try new things with him.

Libra man Pisces woman friendship will often find that their timing is off. When one wants to talk, the other does not. There will be times that the Libra man will want to avoid dealing issues with the Pisces woman. She will think that he is emotionally detached, but rather he is just tired of the battle.

The ideal relationship for the Libra man is stable. The inconsistent Pisces woman will frustrate him. This happens especially when she finds it difficult to make decisions. If he is not able to bring about some balance in their Libra man Pisces woman affair, there will be many disagreements between them.

When the Libra man wants to attract a Pisces woman, he can be her anchor when things look difficult. He should avoid sharing his problems with her, but rather he can keep their relationship light and hassle free. When a Pisces woman wants to get the attention of a Libra man, she can ask him for advice on a matter. He will be drawn to her wanting to provide her with his advice. The natural instinct to avoid confrontation is a big draw card for him.

Libra man Pisces woman compatibility is over when the Libra man decides to end it. It will be a slow unwinding of things, whilst he assures the Pisces woman that everything will work out in the end.