The Air element of Libra together with the Water element of Scorpio can only make rain. These two people share a common appreciation for intelligence and the necessity of constant personal growth. But as a couple, they find it hard to find common grounds. They communicate well, always finding topics to discuss. However, it doesn’t make up for the fact that Scorpio woman Libra man compatibility simply doesn’t work.

Libra and Scorpio both enjoy beautiful things. One of this couples main activities should be enjoying art, theaters or concerts. If Scorpio woman Libra man in love find common interests, they can talk about them constantly. Still, they might have some financial issues. Seemingly, Libra is not good at handling finances, and since they both enjoy spending money, they will not have much of it. At least they will have had fun spending it.

Libra man will be smitten by Scorpios sharp mind and intelligence. This woman seems to know everything about everything, and she can hold a discussion. Scorpio woman appreciates the intelligence of Libra. When it comes to their careers, Libra can help Scorpio to become more sociable and teach her a few lessons about diplomacy. Similarly, he will also introduce her to many important people, which could help Scorpio in advancing her career. Scorpio can show Libra the importance of details and hard work. Libra is full of ideas, but he lacks initiative. For this Scorpio woman Libra man couple it is easier to build a relationship if they work in the same office or study together.

Libra has to understand and accept the impulsive nature of Scorpio. His excellent communication skills can help him to deal with all the mood swings of Scorpio. He can very well rationalize her emotional responses. The truth is that for this couple the best way to deal with their problems is in the bedroom. Their Scorpio woman Libra man sexual relationship is very intense, and as opposing signs, there is a lot of heat.

Furthermore, their ruling planets-Mars for Scorpio and Venus for Libra make the perfect match of male and female energies. The only issue in this connection is that water and air are opposites. Although they have great Scorpio woman Libra man sex life, there will always be something missing. Furthermore, the sexual contact between them is often the one thing why they don´t break up. In fact, the sexuality of Scorpio is what mainly attracts Libra.

Libra has a peaceful and social nature. These men love to be around people, mostly to hang out with their friends. He pays a lot of attention to people around him, especially friends and family. Libra doesn´t want to be alone. Scorpio woman, although quite social cannot cope with Libras constant need for public appearance. She thinks that if he needs to be around people, he might as well just be with her. Scorpio has her circle of friends and acquaintances, but it consists of particular people that have her approval.

The social nature of Libra man brings out Scorpios jealousy. Libra is faithful to his partners, but Scorpio just does not approve of him needing anyone else but her. For her even to consider being in a Scorpio woman Libra man union, Scorpio needs to make nice with people close to him. Also, has to accept the fact, that his attention will always be shared with someone else. If she wants to keep seeing this man, Scorpio will need to learn how to come out of her shell and learn to be more socially active. Libra loves going out, and if they want to stay together, they will need to spend a lot of time socializing.

Scorpio woman loves to have a strong shoulder to lean on. Libra man is a good listener, but he will never understand Scorpios emotions. Libra man rather keeps further away from Scorpio woman Libra man emotionality. He is a rational person and makes decisions based on what he thinks. He is also a positive person, and the darkness of Scorpios being if she ever chooses to show him that, scares Libra. Scorpio will have a hard time dealing with that because she bases her life on emotional decisions. 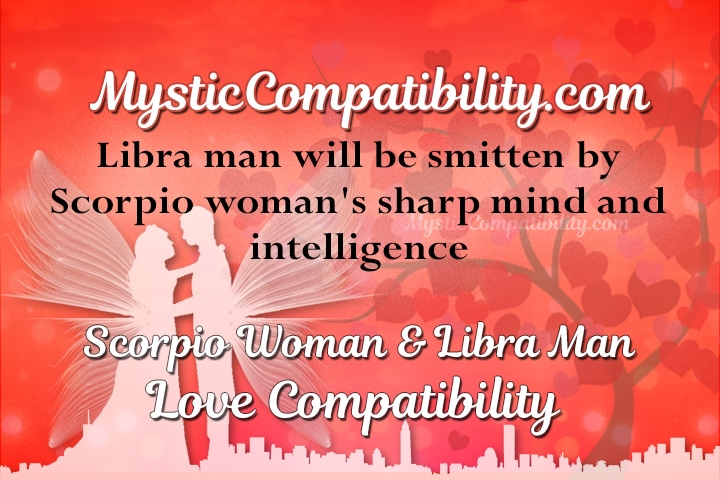 It seems like Libra would be a good fit for Scorpios controlling nature. This man leaves the planning to others and enjoys sitting back and relaxing. For a moment, that might be just the right thing for Scorpio, but she will eventually get tired of taking all the control and doing all the planning. For Scorpio woman it is much more satisfying if she has an equal opponent- that just makes thing more fun. Libra man will not fight her on this issue. Scorpio woman appreciates when her man can sometimes be strong-willed and supportive. However, with in a Scorpio woman Libra man love compatibility, she will never experience that. Scorpio woman needs someone much stronger in her life Libra man is not able to fulfill this need.

The Scorpio woman Libra man sexual compatibility is not very high. Scorpio woman is all about combining physicality with emotionality- she needs to feel and give love during sex. Scorpios best way to express her is between the sheets. For Libraman physicality is not a big thing. Sex is not his way of expressing; it is more of a way to satisfy his needs. He will most certainly be impressed by the wide range of sexual knowledge from Scorpio woman, but he will simply not understand her. It would take lots of effort to make Libra man emotionally accessible during sex. At the beginning of the relationship they both might have some fun, but later on, there will be many misunderstandings. Scorpio needs someone who she can communicate on an intuitive level, but with Libra that will never work.

For this relationship to work, both Scorpio woman Libra man zodiac signs will have to put in a lot of effort. Scorpio always needs to feel loved and cared about, and Libra would have to learn how to prove his devotion to Scorpio. She needs constant love reminders from him, but if she does not receive that, Scorpio gets suspicious, jealous and aggressive. Scorpio woman needs to dial back her aggressive nature. She has to either accept Libra man for who he is or change her expectations. If they find a way to deal with their expectations from each other, this relationship might have a future.

In conclusion, there are so many things that are not compatible in the union between Scorpio and Libra. The element of air will always have trouble finding common ground with the water element. Furthermore, their Scorpio woman Libra man signs are just utterly different. Scorpio woman will be able to express all of her need for control in this relationship. Although she will build a comfortable home for them both, Libra will seemingly rather spend time with his friends, than stay home.

Additionally, the build-up of harmful emotions between these two people can make them very miserable. Also, when she is jealous, Scorpio woman gets very angry and revengeful. Libra man will not see this coming, and he will most likely not be able to cope with that kind of emotions. In a Scorpio woman Libra man compatibility, these two people have things to learn from each other. This is especially when it comes to their careers. But the differences will take a toll on both lives, and the question remains open; is this relationship worth the effort?