The Scorpio man Libra woman compatibility can be ardent and seemingly successful to start with. There will be a mutual and instantaneous attraction between them. With his enigmatic and dark brooding personality and her flirty and entertaining outlook, they are bound to have a fascinating entanglement. Scorpio man will watch her interaction with others and be drawn to her witty repartee and sharp deliberation.

Libra woman is gentle and intuitive and has the ability to compensate for his the intensity. Her love of power will keep her coming back for more. She has the social etiquette and welcoming mannerisms that will make their relationship a success. He is reserved in his interaction within social circles and will rely on her to entertain their friends.

His sullen and brusque manner will not deter her and this will intrigue him. He will be charmed by her pleasantness and refinement in all her interactions. His brooding intensity gives the impression of a wounded soul and she is drawn to his resistance to open up to anyone. When he comes to understand her need for verbal reassurances, she will be drawn to the love he has for her. Her indecisiveness will frustrate him and he will try and encourage her to develop more determination.

The gentle Libra woman is not intimidated with the Scorpio man’s supremacy. She will realize that he is as intense as she initially thought he was. When he displays his green-eyed passion, she will feel captivated and excited by his responsiveness. She shares his appetite for honesty and equality and he will discover her talent for rational thinking.

When the Scorpio man has one of his fiery outbursts, the calm Libra woman will not give him the attention he is looking for. Although this frustrates him, he appreciates her composure to not fall apart. Her ability to expertly deal with him will bind the Scorpio man Libra woman sun signs together. She has the ability to be slightly superficial which he will take in his stride. He will endeavor to discover her philosophies and feel comfortable to utilize them where possible.

Together the Scorpio man Libra woman in love couple are able to support each other in bringing their fervent objectives to completion. The Scorpio man will broaden the Libra woman’s horizons and can take her on a captivating intellectual expedition. She will help him find a balance to create a harmonious demonstrative existence.

Scorpio man and Libra woman compatibility will initially be touch and go. Therefore, once the relationship gets going, it will run deeper than what they both anticipated. Should this couple not align on a romantic level, they will probably not meet up at all. When they do come together it won’t be as a Scorpio man Libra woman friendship but rather a structured working relationship. They are able to find a balance and agree on a structure that works for both of them.

Passion for the Scorpio man is tumultuous and the Libra woman will bring about the balance needed. She has the tendency of tempering things into a business-like arrangement. Romance for the Libra woman is very superficial. Thus, an anticipation of gifts for all selected occasions will be mandatory. The Scorpio man may still not be able to satisfy her systematic and methodical outlook on how romance should be.

Sex for the Scorpio man Libra woman in bed will be a trade of what the Libra woman wants and what the Scorpio man is prepared to accept as payment. At times, his sensual nature can be somewhat too much for the casual Libra woman’s idealistic ethics. He will want to own her body and mind and might have to succumb to her requests to be able to glean what is going on in her head. She experiences sex on a more rational level, and he is lustful in his approach.

Equally, Scorpio man Libra woman marriage will be a successful working partnership. Over time they might find that there is more between them than what they initially anticipated. There will be no grey areas within their marriage. They are both inclined to be extremists, so it’s all or nothing for them. Once they have children, they will stop at nothing to keep their relationship successful. Their home will run like clockwork, with everything in its place and an obvious lack of clutter. 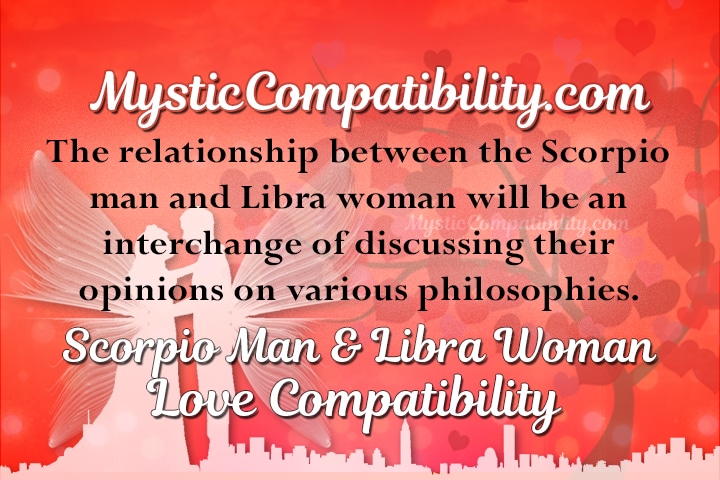 In the Scorpio man Libra woman love match, it will be an interchange of discussing their opinions on various philosophies. He will hold back as to his true feelings, and she will accept the challenge of revealing all his secrets. She prefers an easy and open relationship and at times will struggle in wanting to know what he is thinking on a matter. The mental attraction between them will keep her coming back for more. Over time he will see that she can be trusted and open up to divulge all that is hidden.

The Scorpio man Libra woman Zodiac match will complement each other very well. His personality brings the passionate and loving qualities to their relationship. Whilst she is idealistic and sensual, bringing the “warm and fuzzy” into their union. She will happily allow him to take the lead within their relationship and he will not hesitate to rise to the challenge. When she endeavors to start something new, he is at her side helping her to bring it to fruition. She is tenacious in her outlook and has the ability to set their relation on the path to success.

From time to time, the Scorpio man can be a bit too intense for the gentle Libra woman. She is a rational thinker and will analyze and arrange everything to work according to plan. He will sometimes want to get lost in the moment and this is where they disconnect. When they are not able to meet in the middle, cracks will start to form in an otherwise perfect Scorpio man Libra woman love compatibility.

Financially the Scorpio man Libra woman couple are at different ends of the scale. The Libra woman loves to lavishly spend money on a whim. The Scorpio man prefers to carefully manage his finances. He understands that his career and family need to be supported and will work hard to make this happen. If she does not agree to hold back on spending and he declines to allow her some degree of freedom, many arguments will arise. When they cannot agree on a way forward, it will result in fiery arguments between them.

When the Scorpio man wants to get the attention of the Libra woman, he can pay rapt attention to what others around them are saying. Her need for acceptance within a social network will be what gets her attention. He will need to open up and share his thoughts, ask her opinion and agree to work together on something.

When the Libra woman wants to attract a Scorpio man, she can support him in his career aspirations, objectives and whatever else he has hidden in the recesses of his mind. When he shares some of his goals, she can subtly guide him in how to make a success of them. He will keep coming back for more.

Scorpio man Libra woman compatibility is over when his introverted behavior and long periods of non-communication just become too much for her. There will be no going back to try again, and it will be a bitter end for both of them.