These two water elements together make a flood. Scorpios have unique personalities, and who could better understand a Scorpio than another Scorpio? Still, there are differences between the characters of male and female Scorpios. Being together can make their seventh life heaven or a living hell. Mostly when two Scorpios meet, they recognize each other and bond instantly. In a Scorpio woman Scorpio man Compatibility, both fall in love easily and make serious commitments very fast. There is a lot of intensity in this relationship. As a result, it makes them truly miss each other even in the very beginning of the relationship.

Scorpio instinctively knows what the other one is thinking and feeling. This is because no other person will understand Scorpio at the same level as another Scorpio. They can share their deepest secrets to one another. This couple can truly communicate with any words. For them, they just have to see the other one’s expression to tell what they are thinking. Scorpio woman Scorpio man in love feels very comfortable with each other. Scorpios are quite synchronized as a couple, and because of that, they can avoid lengthy discussions about certain things. In fact, there are some topics this couple should avoid in order not to get into serious arguments. Scorpios find it easy just to be with each other- there is no need for words.

The Scorpio woman Scorpio man conversations are very educational for both of them. They stimulate the other person and can get very carried away in the discussion. Sometimes even to a point, when they start to fight. Scorpios can motivate each other to reach for new horizons and become more successful. They always have topics to talk about, and sometimes they are very controversial. Since they can both trust each other so well, they are not afraid of expressing opinions that others might find disturbing. For both male and female Scorpios, it is difficult to find people they can talk about the mystical things in life, but another Scorpio will share the same enthusiasm about this topic.

The sex life of two Scorpios is mostly amazing. They connect with each other deeply simply because they instinctively know what the other one is thinking. There are never any issues with Scorpio woman Scorpio man sex. The physical and emotional bond between them exists from the very first time they meet each other. They have a lot of fun with each other, and they can push many boundaries. There is rarely anything boring in their life, and also in their sex life. The most amazing thing about this couple is that they fight rough, and they can also take these emotions in the bedroom, but process them during sex. It is the best way how Scorpio can express.

These Scorpio woman Scorpio man soulmates love to feel the safety of home. Therefore, they will create an environment for themselves that they will not want to leave. They feel so comfortable with each other that they are capable of doing nothing- just staying home. Usually, the Scorpio male prefers this kind of living, because he mostly uses his energy in advancing his career. The Scorpio woman will need more active things to do- even after a hard day’s work, she will want to go for a walk or go out for dinner. They both have to compromise about free time activities, because too much staying in can make both of them bored, and they might lose the spark between them.

Scorpio man and Scorpio woman need their privacy from time to time, and the other Scorpio will understand that need. They like to keep some mystery in their Scorpio woman Scorpio man love compatibility. In the end, they can make it more interesting for both of them. Scorpios do have to be careful with their free time pursuits because it might make their partner very jealous. 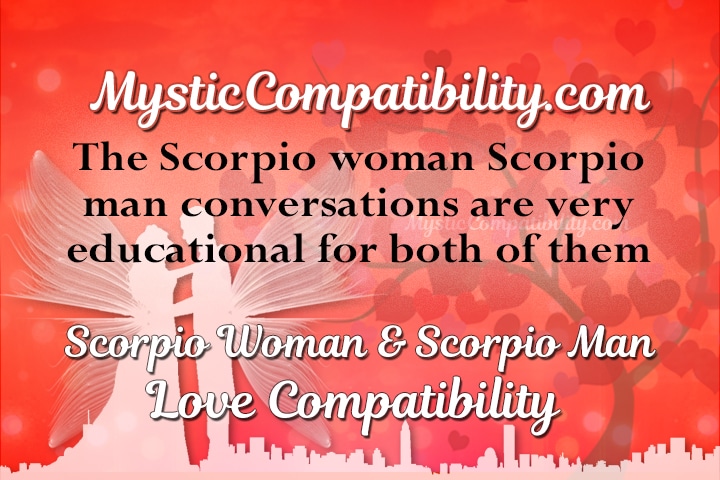 The idyllic Scorpio woman Scorpio man marriage that these two seem to have is full of disagreements. That is because Scorpios have a very inconsistent mood and unyielding character. This is a cause for many arguments between them if they find something to disagree about. If one of them is not able to love the other unconditionally, these disagreements might be very hard to solve.

There is a lot of love between these two people. Sadly, Scorpio woman Scorpio man trust is a huge issue in this relationship. Scorpios are territorial, jealous and suspicious. Since they both know their partner so well and know how Scorpio can influence other people, they have problems trusting each other. Scorpios ask for unconditional love from their partner, and that can damp down the feelings because when pressured, Scorpios tend to pull away. If Scorpio doesn´t allow some private space for her partner, this relationship can soon grow into a complex web of emotions.

For this Scorpio woman Scorpio man union to work, Scorpios need to decide who is going to be the boss. They might divide areas of domination, but that probably will not work. These people don’t know how to exist without feeling superior to others. However, for them to stay together, they will need to learn this quality. Ability to compromise also severely depends on individual personality. Some Scorpios have had the life lesson what their inflexible and dominating nature can do to a relationship. They need to remember that the Scorpio partner is as smart as they are. In fact, she will see through the hidden agendas behind some of their actions.

The Scorpio woman Scorpio man arguments might start if they are both going after the same thing. If Scorpios who are in a relationship also work together, that will lead to many arguments. They are both very competitive, and if they start to compete with each other, none of them will stop until the opponent is completely beaten. This doesn´t make for a good relationship because Scorpios can´t forget wrongdoing towards them. Scorpios like to interfere in other people’s business, and they will also do that to their partner. Even with the best intentions in mind, Scorpios will soon step on their partner’s nerves.

Living in denial about certain things might work in this relationship. When two Scorpios get in a fight, they don´t know how to stop. The Scorpio woman Scorpio man soulmates will bring up the worst things they know about the partner. Scorpios do remember all the negative things that have ever happened to them. Instead, they will use their partners’ weaknesses to hurt them. In these arguments, it seems that the loser is the one who starts crying first or leaves first. As a result, the other one is left in a weird position of feeling terrible but victorious. By the time they decide to makeup, they will have already forgotten what the initial argument was about. They just know that they let out all the build-up of negative emotions.

Despite all the differences, being together with another Scorpio can be a valuable lesson. Scorpios can learn to trust and love another person unconditionally. This Scorpio woman Scorpio man relationship takes the life of both partners to a whole new level. Scorpios are people of extremes.

Usually, they need someone in their life, who can moderate their personalities. Another Scorpio is not the one able to do that. Still, they have a lot of fun together and make each other’s lives a constant excitement. This Scorpio woman Scorpio man compatibility can last, and possibly be the best union that both Scorpios have ever had.