Scorpio woman Pisces man compatibility is one of the most special and magic combinations. In fact, many people dream to have. This combination is powerful, filled with the energy of feelings and emotions. Water is the element for both of these zodiac signs; therefore they have a profound understanding of each other. It is not easy for Pisces to find a partner that understands their way of thinking and living, but Scorpio woman is just the right kind of person for him. It is easy for both of them to get carried away in this wonderful relationship, and they definitely should.

There are rarely any misunderstandings in a Scorpio woman Pisces man love compatibility. Because of their somewhat loneliness seeking nature it might be hard for Scorpio woman actually to find a Pisces man. Scorpio is sociable enough and has many friends and acquaintances, so hopefully, she finds this man. Once they do, it will be time for the deepest relationship they both have probably had.

There is a lot of Scorpio woman Pisces man passion between them. This man is one of the best matches for a Scorpio woman because he intuitively understands her complex character. This man knows how to approach the gentle soul of a Scorpio woman, as well as how to flatter her intelligence.

During Scorpio woman Pisces man courtship, Scorpio woman will allow herself to fall in love. Scorpio, on the other hand, will help Pisces man to be a bit closer to the earth. He sometimes seems to live in his dream world, but the practical approach of Scorpio will help him become more grounded. She will show him how to channel his intuitive powers to a particular goal.

Scorpio woman tends to wonder about the purpose of life. She might be quite tired of searching for love and all the drama that comes with all relationships. Pisces man can be the one she is looking for. When these two Scorpio woman Pisces man zodiac signs fall in love, they sooth the emotional stress they are both under. They help each other to set aside all the mental pain and suffering and their inner conflicts.

Since Pisces man is very caring and compassionate, he will be able to deal with the sarcastic Scorpio woman. This lady doesn’t let her guard down easily, but Pisces man is the kind of person she can truly open up to. Scorpio must be cautious about pushing Pisces boundaries. Although he is very empathetic, he is also compassionate. For him to feel safe and open up to her, Scorpio needs to learn to be tender.

Once they learn how to communicate with each other without hurting the other person, Scorpio woman and Pisces man can have the most wonderful conversations. As water signs, these two possess deep insight into anything around them. Both Scorpio woman Pisces man in love is connected to the magical things in this world. They can talk to each other about things that other people might not even understand.

Scorpio and Pisces have a very emotional approach to life. Scorpio woman bases her decisions on what she feels that very moment, and it can be hard for her to explain that to others. Pisces man is very similar in that way. He is also very connected to his emotions and understands the way Scorpio thinks. Because of their deep Scorpio woman Pisces man emotional connection, they both have excellent intimate compatibility. They both enjoy making love, and they intuitively know what the other partner is expecting.

This Scorpio woman Pisces man relationship is going to be full of seemingly unexplainable decisions and actions that probably only Scorpio and Pisces understand. But that makes it so much more magical.

Both of these Scorpio woman Pisces man soulmates love to spend time in their homes. This could be one of the reasons why it is so hard for them to find each other. Scorpio and Pisces will create their home together, and since they feel so deeply about each other, it is likely that they will see no reason to leave their home. Scorpio woman rarely finds anything to be jealous about when she is together with Pisces man. He is not the type of person who goes out a lot, and once she sees how truly he loves her, she will not doubt him.

When it comes to love Scorpio woman Pisces man are idealists. There is no possibility of this relationship lasting if there is any sign of mistrust. Pisces man might seem too soft for this woman at first. Until Scorpio realizes that in this man she has probably found her true love, she might be still searching for other options. Pisces has to prove to Scorpio how serious his intentions are and show the wonderful future they could have together. Scorpio has to be ready for better things in her life. There will not be much drama with this man; therefore if she is seeking for

There will be less drama with this Scorpio woman Pisces man marriage. Therefore, if she is seeking a strong and lasting relationship, Pisces is the right man for her. For those women who are not mature enough for that kind of relationship, meeting this man can turn out to be a disappointment. 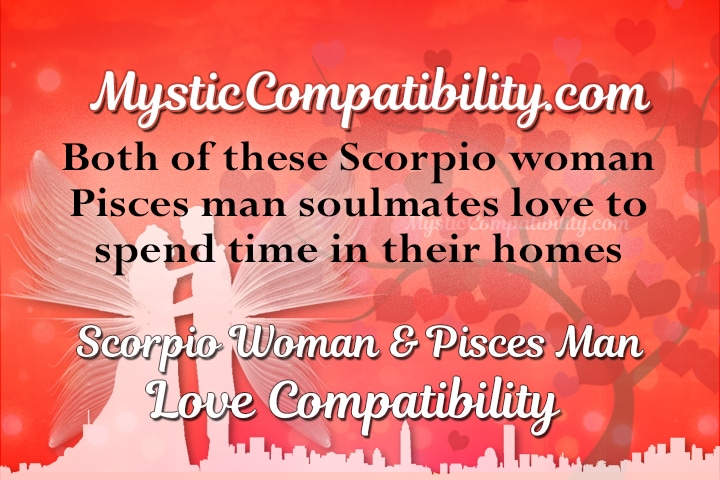 Even though Scorpio woman Pisces man both appreciate each other’s honesty and emotionality, Scorpio woman can be a bit too rough for Pisces man, and he too sensitive for her approach. It is hard for Scorpio to tiptoe around his feelings. Scorpio can sometimes get too dark for Pisces positive way of looking at life. She might get him down a bit with her controlling actions. Scorpio only feels she has to control Pisces because he lives in his dream world and is a bit scattered. This man is full of ideas, but he seems to lack inner strength to carry something out. Scorpio, on the other hand, is very focused when she sets her mind on a goal.

When a Scorpio woman falls in love, she can get very possessive towards her partner. Pisces man doesn´t appreciate her need to control his actions and her being very clingy. He loves the attention this woman gives him. But he understands that her need to be in control comes from mistrust. As a result, that ruins his view of this relationship as perfect.

For this Scorpio woman Pisces man couple to succeed in their relationship, they need to develop a strong friendship base. Scorpio is used to have her own time, and she loves to hide out from the outside world. Pisces man needs to show her that he is trustworthy enough for her to climb out of her shell. If not, Scorpio will get more secluded, and they will just not get to know each other enough to fall in love.

When Scorpio woman Pisces man horoscope signs get together, they become inseparable. She is an active and willful woman, who is waiting for her true love. Pisces is the type of man who can fill the emptiness in Scorpios heart. She will be the support and inspiration he needs. They find it easy to do anything with each other, and they never run out of things to talk about.

This couple motivates each other to reach for better things in life and find new emotional depths. Pisces man and Scorpio woman are probably soul mates. Everything before this Scorpio woman Pisces man compatibility will seem like a time of preparation for the one true love of their lives.