From the astrological viewpoint, the ruling planets of Capricorn (Saturn) and Libra (Venus) are very friendly. At first, it might seem that the Earth element can only make dust together with the Air. But in fact, the Capricorn woman Libra man compatibility can bring many positive qualities in this relationship. Capricorn and Libra can even make it to getting married. Still, there are a lot of differences between them that have to be resolved.

Libra man doesn´t like to be in control of everything. He enjoys all the benefits that Capricorn brings in this relationship, like comfort and independent lifestyle. Libra loves social events and having fun. Capricorn woman rather prefers a quiet lifestyle.

When Libra gets tired of all partying, he enjoys being in the comfort of Capricorn woman. Capricorn woman doesn´t mind him going out alone. She is not keen to be in social settings after a hard day´s work. Libra man is ok with this arrangement because sometimes Capricorn can get him down.

The Capricorn woman Libra man relationship is filled with trust. Libra man sometimes can have questionable motives. He has many qualities that Capricorn should be suspicious about. But together with this woman, Libra finds it hard to hide anything.

Capricorn can sometimes be very strict with this man. She shouldn´t judge him but rely on him. Together with Capricorn, Libra has the best intentions in his mind. This man simply needs some privacy. He is not trying to hide anything but feels that with keeping some secrecy, he is protecting himself.

Libra man can make Capricorn´s life much more fun. He is okay with her being the boss in their relationship. Still, he needs to have fun, and from time to time Capricorn will have to join him. If she is willing to open her mind, she will have a lot of fun with him. Same goes for the Capricorn woman Libra man sexual compatibility.

Capricorn woman has to stay open-minded and let go of her prejudice.  The Capricorn woman Leo man in love together can explore new horizons. There are a lot of compromises that have to be made in this relationship. They have a good basis of trust in each other, so they shouldn´t have any problems working through other issues.

Libra man can be very indecisive. He looks at every problem from all the sides and takes time making decisions. His indecisiveness gets on Capricorn’s nerves. Naturally, she takes over all responsibilities. The Capricorn woman Libra man lovers don´t mind things being this way.

Capricorn has to remember, that her partner is equal. With so much power in her hands, she can get very bossy. That will make Libra resent her and will not lead to a happy relationship. Libra needs to learn to take responsibility and control over some things.

Capricorn woman dating Libra man has to become more flexible with her decisions. If she has set her mind on something, it is hard to convince her otherwise. Capricorn has to accept that there are circumstances that can change. Therefore her way of doing things can also vary. 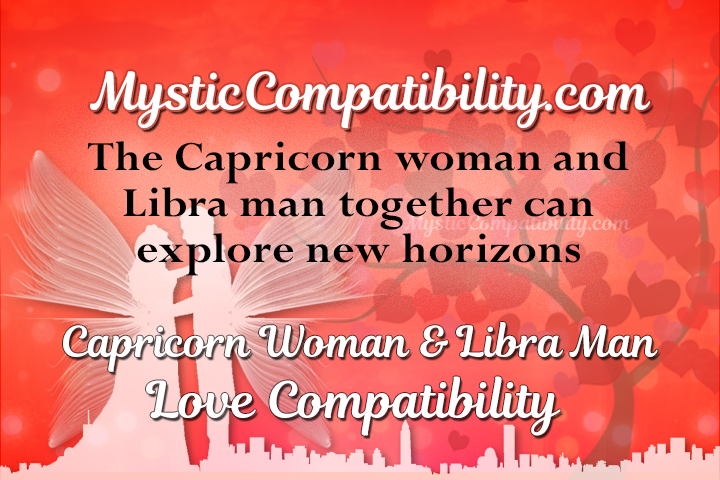 Capricorn woman´s biggest motivation to work as hard as she does is a success. For her success is having a material and personal stability. This woman has a lot of ambition. Unfortunately, Libra is not at peace with that. He believes that power has to be divided equally among all people.

Capricorn will never want to accept this philosophy. She has to keep all the power in her hands, to achieve her life goals. Libra wants to see a social and psychological harmony between people.

Being around Capricorn woman brings out a lot of spite in Libra man. He is not stubborn by his nature, but with this woman, he feels the need to keep his ground. Capricorn is not good at dealing with his emotions, and it can become impossible to talk to Libra. Because their elements- Earth and Air- are so different, it is hard to find the Capricorn woman Libra man a way to connect.

Dealing with minor issues in the Capricorn woman Libra man relationship can turn out to be a hard task. They need to build a better foundation of their relationship. Setting some ground rules for their discussions might help to keep things civilized.

Libra man is very connected to his emotions. Since Venus rules him, he is connected to the feminine energies. He holds back on his feelings because he doesn´t want to be hurt or judged. Capricorn woman needs emotion in her life. Unfortunately, with Libra man, she will be the judging force he fears.

Libra man will keep holding back his emotions, and Capricorn will probably fail to realize it. This can severely damage the Capricorn woman Libra man love compatibility. Capricorn needs to let go of her controlling nature. She has to accept that Libra can bring different qualities in this relationship.

Libra brings his playful nature in the bedroom. He has a good imagination and a lot of fantasies. Capricorn woman is not the one who will fulfill all his sexual dreams. In fact, if he wants to have a good Capricorn woman Libra man sex life with her, he needs to keep his fantasies to himself.

Capricorn has to realize, that he needs to express himself. She has to agree to his ideas from time to time. This woman needs more lightness in her life, and Libras attitude will benefit her. She just has to accept his different way of thinking.

Capricorn woman is a cardinal earth sign. That means, it is hard for her to change things about herself. Libra man is a Cardinal Air sign. The Capricorn woman and Libra man relationship are in need of a lot of compromises. They have many things in common, but this couple fails to realize it.

The Capricorn woman Libra man lovebirds are more focused on things they don’t like about each other. Nevertheless, there is a common attraction. Both Capricorn and Libra are usually brilliant and successful in their careers. They have things to talk about, and they can learn a lot from each other’s perspective.

Libra man is capable of bringing positive emotions in Capricorns life. She is very focused on her work. Libra, although successful in his career, would instead want to party and travel. He can teach Capricorn to let go and not to be so stiff. With this man, she can explore new things about herself and the world.

Libra man can learn a lot about patience and dedication from this woman. She will be great support for him too because Capricorn loves to take care of her partners. The Capricorn woman Libra man compatibility will last long if this couple needs to accept each other for who they are.