The Capricorn woman Aquarius man compatibility can be quite problematic and in most cases unsuccessful. Not only there is a high rate of separation between these two zodiac signs, but also the sudden termination of relationship for many reasons.

They are capable of working together, but there is not even a basis for Capricorn woman Aquarius man friendship between them. Still, there is a possibility that they will have a romantic spark between them.

Aquarius man is attracted by this woman´s powerful character. She will be fascinated by how he stands out in the crowd. With enough patience, they can develop a relationship. How long it will last depends on how much effort they are willing to make.

Capricorn woman shares an intellectual bond with Aquarius man. Their way of thinking might be completely different, but share a similar core set of values. Both of these people have their goals. They can work restlessly to achieve them.

Capricorn woman has a very sharp mind. She has great stamina. This woman can do the seemingly most boring thing, but she will not lose her focus. She strives for greatness and success. The aim of her work is mostly to benefit herself and develop a sense of security.

Aquarius man is a profound thinker. He is highly intelligent and usually very successful. In his work, he always tries to benefit other people, not only himself. Aquarius man has the capability of seeing things from all sides. He is not judgmental. This man can analyze a situation and remain honest and objective; therefore it is easy for him to solve problems. The way they both do things differs severely, but Capricorn and Aquarius appreciate each other´s focus and determination.

The Capricorn woman Aquarius man couple can have interesting conversations with each other if they have a certain aim. She is a realist, and Aquarius possesses an analytical mind. They both can discuss certain problems and conclude. They both respect each other. Respect in this relationship doesn´t come from emotional bond or deep feelings. It is something they just feel for each other from the very first time they meet.

Capricorn woman Aquarius man in love have a lot of trust in each other. She has firm beliefs. Capricorn woman values honesty and directness and doesn´t accept anything else. Aquarius man has a powerful personality, and he never fears confrontation. They will always remain honest with each other, whatever the matter would be.

The Aquarius man is a good listener; therefore Capricorn woman can share her thoughts and secrets with him. He can always be supportive and give her new and unconventional ideas how to solve her problems. It is up to Capricorn if she is willing to accept his point of view.

Capricorn is not able to get used to the extravagant character of Aquarius. He has a different way of thinking and doing things. This man also possesses a very peculiar sense of humor and set of jokes. For most people, he might be very entertaining, but Capricorn woman will most likely not be able to stand him. Aquarius loves art, music, and cinema. He wants to enjoy the life, party and shine in the eyes of others.

In the eyes of the severe Capricorn, he quickly loses all his authority, reputation, and prestige. She is not able to accept his behavior. This woman can merely leave her Aquarius partner with no warning or explanations. She will continue to live her life and never look back. 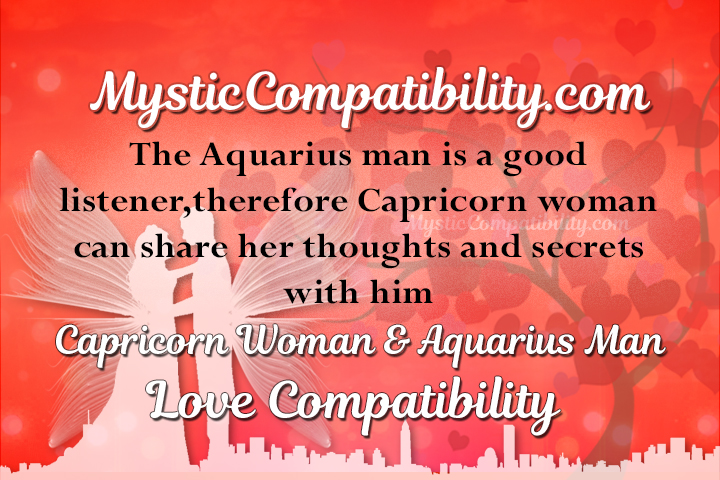 Capricorn woman has a hidden emotional side. On day to day basis, she might seem cold and distant from everyone, but if the right person comes along, he could spark a lot of feelings in her. Aquarius man will likely not be the one for the job. As an Air element, he sometimes can seem to be in love with the whole universe.

This man needs someone who he can share his beliefs with. He needs a person who could dream as much as he does, and not judge him. Capricorn with her realistic nature can easily crush this man´s dream world. Aquarius is very simple- if his emotional world is fulfilled, his physical body can live without comforts.

Capricorn, on the other hand, needs physical contact to develop emotional connection. The Capricorn woman Aquarius man lovebirds belong to different elements. In the case of this couple, it indeed shows- Aquarius lives in clouds, while Capricorn has her feet strictly on the ground.

As an Earth element, Capricorn is very cautious and takes things slowly. Aquarius as an Air sign enjoys doing things quickly and spontaneously. These fundamental differences make the Capricorn woman Aquarius man sexual compatibility almost impossible. They both have different ways of expressing emotions. Aquarius will see Capricorn woman as selfish. She needs a lot of physical contact to feel loved and cared about. She doesn´t go for one night stands.

This woman will get to know her partner and develop respect for taking things to the bedroom. Aquarius man doesn´t have so much patience. He likes things to be fun and relaxed. Capricorn is opposite to that. With her rational mind, Capricorn trusts her Aquarius man. But his flaky character doesn´t make her feel comfortable.

Capricorn woman Aquarius man can find things to do together, but they will most likely not enjoy each other´s company so much. These people have a completely different life pace. Before doing anything, Capricorn likes to make a plan, and get ready for all possible obstacles that she might face.

The Capricorn woman Aquarius man relationship may come as a challenge for both of them. There might not be many reasons why they wish to stay together, or why they started this relationship in the first place. There is a good intellectual connection between them, and they can be excellent colleagues.

As lovers, they lack emotional bond and chance to develop feelings for each other. In the Capricorn woman Aquarius man compatibility, Capricorn will have to learn how to compromise. She could have a lot of fun together with this man if she is willing to accept his unconventional ideas. He can offer her a variety of adventures and experiences, which she wouldn´t even have thought of. Aquarius man has to pace himself and accept that Capricorn has her strict limitations. She can open up only when she can rely on her partner.