Who can better understand the nature of Capricorn than another Capricorn? When these two people get together, they develop a strong Capricorn woman Capricorn man compatibility. They will certainly have very deep emotions towards each other. These emotions can sometimes also be obstacles for them to see things.

Capricorns can share same values and also flaws. They understand each other’s character very well, but it can be hard for them to make compromises. They make an excellent team not only in love but also in their business life.

The Capricorn woman Capricorn man in love have high intellectual abilities. They have a sharp mind and structured way of thinking. Capricorn is a hard worker. Most likely they will not have much free time to spend with each other. But Capricorns will never resent each other for wanting to work more. They understand their partners need for success, and they want to help each other achieve their goals. It is important for both of them to have financial stability.

The Capricorn woman Capricorn man relationship has a good foundation. Although both Capricorns might have different needs and interests, they share the same values. For them, security and stability are the main values. They are efficient in all aspects of their lives, but they also enjoy beautiful things.

The Capricorn woman Capricorn man couple will have a truly nice home. Capricorn woman will have an excellent taste combined with practicality. Capricorns don´t like to go out much. After a hard day´s work, they rather want to be home. Relaxing together with their partner is enough for them.

Trust is also of major importance for these partners. They have very high standards for each other and everyone else. There seems always to be some competition between them. The Capricorn woman Capricorn man lovers challenge each other quite a lot.

Capricorn´s want to prove who the best is. Even with all this competition, they know that they can rely on each other completely. They know each other’s character so well that they can always be sure of trust. Capricorn doesn´t see the point of cheating or being dishonest with their partner.

Capricorn woman needs more than just love to be in a relationship. She needs her partner to be supportive, caring and intelligent. Only when she feels completely safe, she can develop deep feelings. She can find all of these qualities in Capricorn man. He is a strong and determined person. Capricorn is very stable in all aspect of his life. None of these partners like change. This man will show his love by being a caring partner and strong support to his woman.

The Capricorn woman Capricorn man sexually are great, if they are treated right. They have good sexual compatibility because they have enough patience. Capricorns don’t fall in love from the first sight. It takes time for them to grow emotions. But their feelings keep growing stronger each day.

They understand the expression of feelings in a physical way. Their sex life is going to be filled with a lot of touches and kisses. It is going to be easy for them to trust each other and feel safe and relaxed. 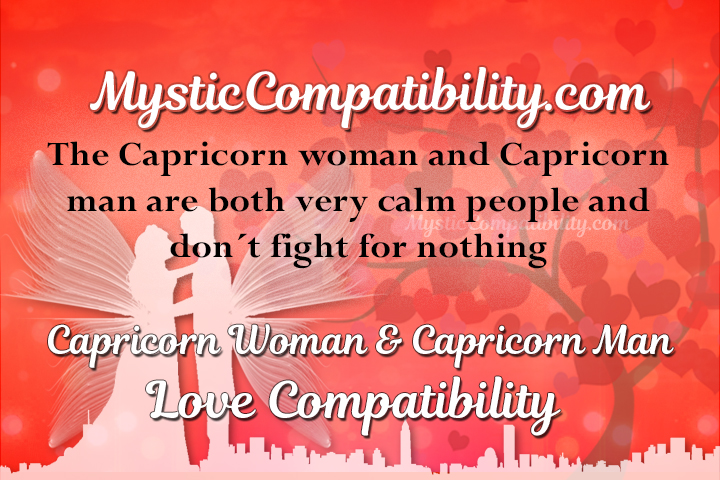 Although Capricorns trust each other, it is hard for them to share everything about themselves. At the beginning of the Capricorn woman and Capricorn man relationship, they are both quite shy. It takes time to get to know their partner. Once they are over the initial feeling of being distant, they will realize how similar they are.

There is a buildup of things the Capricorn woman Capricorn woman soulmates don’t say to each other. One look at their partner’s face and Capricorn can completely shut down. Each of them could have some past experiences or secrets they might want to share but are too afraid of being judged.

Capricorns have a very analytic mind. They will observe their partner’s actions and analyze them. They sometimes create obstacles for their partner, just to test them. If they continue doing it, they will both lose respect for each other. There are some things Capricorns disagree about. Since they are both very stubborn, it is not easy for them to change their minds.

They each have a set of rules they live their life by. In case they can´t compromise on some matters, it is best to avoid them. If they are not willing to change their opinions, it is best to avoid these matters. When two Capricorns get in a fight, it may lead to a Capricorn woman Capricorn man break up. They fight with pure logic and arguments. This can crush the other person and further damage their belief in love.

This relationship might seem like just a Capricorn woman Capricorn man friendship for a long time. Capricorns have trouble expressing their feelings. Public expression of affection will be something they both rarely do. This might be quite hard if they are not on the same page about their beliefs.

This couple might experience trouble in reaching intimacy in their relationship. They both get carried away with work and other obligations. Capricorn is usually not the one who initiates sexual contact, so in this relationship, it might be tricky.

Both Capricorns restrict themselves from letting go of their fears. Before they reach complete trust and openness in their sexual relationship, it might be very awkward. There are not many possibilities for experimentation in this union. This couple needs to get over their fears and prejudice. Once they do, the Capricorn woman Capricorn man love compatibility will be a happy one.

Capricorn woman and Capricorn man are very complicated people. They both can have as many things in common, as they have differences. Usually, they share a basic set of beliefs and values. Their differences are not likely to change because both partners are very stubborn. Still, it is good that their characters are so similar. They can deal with any issue in a calm and rational manner.

Capricorns are not comfortable people to understand, but together they have a great chance of being happy. It could take forever for them to develop deep feelings for each other. And it can take more time actually to admit these feelings to their partner. Capricorns are not good at displaying feelings or affection. Being head over heels in love doesn´t go with their way of living. First of

The Capricorn woman Capricorn man compatibility comes with a low display of feelings or affection. Being head over heels in love doesn’t go with their way of living. First of all, they need to have an intellectual bond with their partner. Capricorns will go slow and steady and develop feelings only when they know it is worth it. In fact, once they have found their partner, they keep falling in love more deeply every day. For Capricorns, that is something worth waiting for.