From the astrological viewpoint, Pisces and Capricorn are both very feminine zodiac signs. They both have a very sharp mind. Feminine energy gives them pronounced intuition. The Capricorn woman Pisces man compatibility allows them to live in conformity with their emotions. Still, they have a lot of differences.

Pisces wants to solve the mysterious nature of Capricorn. He is very in depth with his emotions and has a very sensitive intuition. This man understands that Capricorn is a gem that needs to be polished. Capricorn woman is fascinated by this man´s lifestyle. She finds him intriguing and inspiring.

Capricorn woman Pisces man lovers have a great balance between them. She is a hard worker and enjoys it. She aims to earn money to gain a sense of security. Pisces man is also keen on working. His objective is less self-centered- with his work, he wants to help other people. When they both get to know each other and discuss their motivations to work so hard, they will gain a lot from each other.

Capricorn woman will learn not to be so self-centered. She will see the enthusiasm and joy that Pisces has, and will understand, that it is not all about material values. Pisces man will remain giving and kind towards others, but from Capricorn woman, he will learn to be more practical.

Capricorn woman Pisces man soulmates don’t open up easily, and they are somewhat shy. But their positive emotions towards each other will eventually grow into deep feelings. The feelings between them will only get deeper with years. Pisces and Capricorn bring out the best in each other. They are both keen to learn new things and work, therefore they will never be pulled into a routine. They will stimulate each other´s intellectual abilities.

As opposing Capricorn woman Pisces man signs, they have a lot of attraction towards each other, especially in a sexual way. They have one of the highest sexual compatibilities in the whole zodiac. Capricorn woman is very rational and strict. She has her set of beliefs, and she keeps to them. Pisces man is emotional and has no trouble being flexible. But he also sticks to his core beliefs and possesses a powerful personality.

This man is capable of making Capricorn feel very relaxed and comfortable. Pisces will awaken the emotional side of Capricorn woman, while she will bring out his rationality. They have a very good understanding of each other. The Capricorn woman Pisces man couple shares a lot of intimacy. Capricorn woman can open up to this man. She will feel excited and relaxed. Pisces man has a lot of emotions. Together with this woman, he will be able to control them.

Pisces man is a dreamer. He enjoys his life through his heart, not his mind. He has a lot of ideas, but mostly he doesn´t go through with them. Capricorn is much more practical and straightforward. She is a determined person. 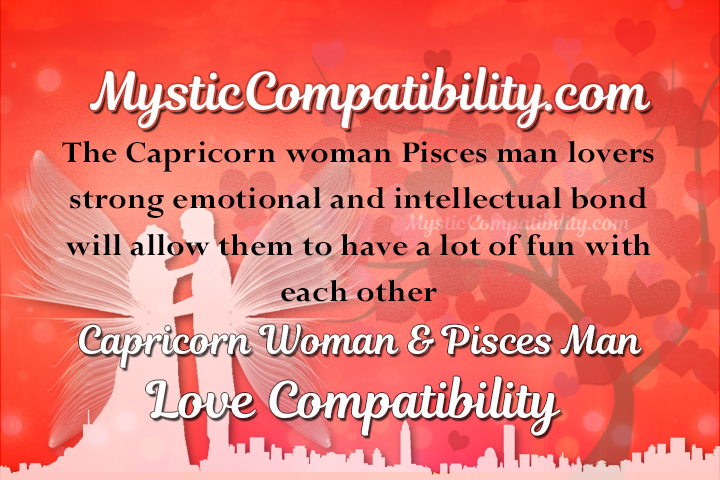 Capricorn woman believes in things that she can hear, see and touch. In her mind, Pisces man should be more practical and ambitious. This woman needs to feel secure. Pisces man can be supportive, but he cannot provide Capricorn with the necessary sense of security. His lack of ambition and romantic nature is going to be a frequent topic of disagreements.

The Capricorn woman Pisces man relationship needs time to get strong. At the beginning of the relationship, they can´t live without each other and love to do everything together. Once they have gotten to know each other better, they will see their differences. Pisces will find Capricorn too boring for his taste. He will continue to do things together because of his romantic and supportive nature.

It is highly likely that he is not interested in any of her activities. Capricorn will be driven crazy because of Pisces attitude towards everything. He is spontaneous and rarely has any plans. He enjoys his life that way, but it is impossible for Capricorn to feel comfortable with no intention.

In the Capricorn woman Pisces man love compatibility, it is not likely that any them will change anything about themselves. Capricorn woman is severe and strict. Pisces man brings a lot of positive emotions in her life, but she will remain as she is. Pisces too has good and bad qualities. None of them want to compromise.

Most problems arise from Capricorn’s firm way of thinking. If she has an opinion about something, she is not likely to change it. Her world is only in black and white. Pisces man also has the belief system that he is not expected to improve. Capricorn can be very dismissive towards his opinions. She only has to take one look at Pisces, for him to know exactly how much she disagrees.

Pisces will not abandon his convictions, but he will start to feel lonely. He thinks that by dismissing his beliefs, Capricorn woman also rejects him as a person. This attitude will severely disadvantage Capricorn. If Pisces feels underrated, he will lose all his inspiration and positive attitude. He will no longer be able to provide her with these emotions.

Developing trust between Capricorn woman Pisces man soulmates can take time. She has a right and sometimes rough attitude towards everyone. This might trigger Pisces to sometimes lie to her. Capricorn asks her partner to be completely honest. Pisces believes that some things are not meant to be revealed. For Pisces, Capricorns cold attitude might trigger suspicion.

In the end, the Capricorn woman Pisces man dating each other both have to get to know each other better. Once they do, they will realize that there is no reason not to trust their partner. The important thing is to be patient and work for this relationship to succeed.

Capricorn woman can have a very long and happy relationship with Pisces man. They have many things in common, as well as many differences. That makes this relationship more exciting for them both. Pisces man can bring a lot of joy in Capricorns life.

She will make his life more structured. They bring out the best qualities in each other. The Capricorn woman Pisces man compatibility can only get better with time because they share a profound emotional and intellectual bond.