The Leo man Libra woman compatibility in an affair are both charming extroverts. The dreamy Libra woman will do anything to please her man, and the egotistical Leo man will have found a partner to stroke his ego when needed. They are social climbers who are inclined to always be in the limelight. She is artistic and will spend time listening to his notions.

The noble Leo man will generally choose a woman that looks like she needs to be saved out of her current situation. The indecisive but strategic Libra woman will not respond well to this thinking. When necessary the Libra woman is able to be inventive and does not need to be saved from anything.

The Leo man Libra woman friendship is not on the cards for both of them. The romantic Leo man is looking for an erogenous partner, and the business-like Libra woman keeps her friends and lovers as separate entities. The Leo man is all for traditional romance and courtship.

If the Libra woman has any doubt of his interest, watching him meticulously going through all the correct procedures will confirm his interest in her. During their courtship there will be a lot of fun times and the romance will be flowing. Once their relationship becomes more serious things might not go as smoothly as before. All the hard work to make a relationship or a marriage successful, might not be what either is able to give.

Superficially the Leo man Libra woman couple seem to be perfect for each other. The Leo man will have a woman that flatters him and enjoys being at his side, and she will ensure that they have a lovely home.

The Libra woman will have found a partner that is not only dignified and powerful in his approach, but also romantic, lavish and loyal to a fault. She will ensure that she fulfills all his wants and desires. He may have to stop at some stage and pay her the attention that she rightly deserves.

The Leo man Libra woman in love will lead a glamourous lifestyle, or so it would seem to anyone looking on at them. The fast paced Leo man is energetic and confident. He does not hesitate to rush into making decisions on matters. The cautious Libra woman on the other hand carefully takes her time in reaching conclusions.

At times she may be too rational and not be able to make a decision at all. This will be especially frustrating for the authoritative Leo man if she questions his plans and the steps to get there. The passive Libra woman is capable of leading herself.

Romance will aid them in hiding their differences. The non-confrontational Libra woman prefers not to have to deal with skirmishes. She would rather not go to the Leo man with every little irritation. This can result in a screaming match as everything that irritates her, gets thrown in his face during a heated argument.

The Leo man Libra woman love compatibility is dependent on them being able to agree on decisions within their relationship. Their bond is supported by their mutual charm and sociability.

The lavish lifestyle that the Leo man Libra woman soulmates are accustomed to definitely comes at a price. If they have financial issues and this dampers their ability to spend money, they could become moody, and their common ground will be on rocky soil. 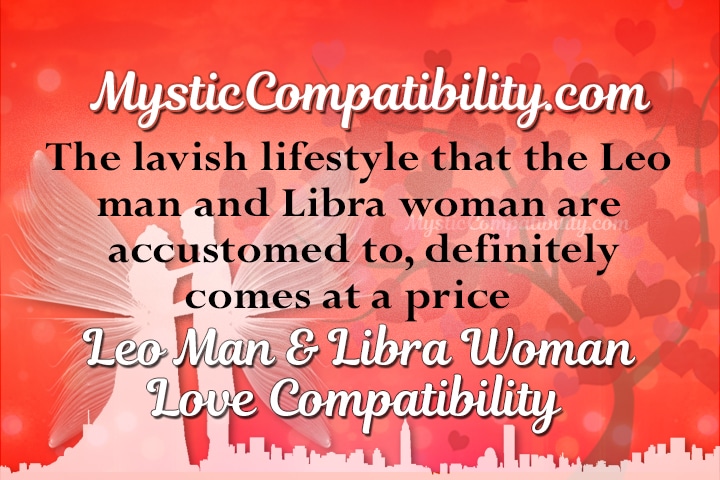 The passion that the Leo man will feel for the Libra woman is so intense, that he will stop at nothing to make her, his precious companion. The elegant and passionate Libra woman is not fast in her approach to their sexual engagements. Outwardly she can seem domineering, but she would rather be submissive when they take their relationship to the bedroom.

Leo man Libra woman sex for both of them is having fun and satisfaction. The Leo man and Libra woman are lost in the romantic foreplay and arousing settings. They are not averse to playing dress up for the fun and fantasy aspect of their love making. Talking about sex and what works best for them will be an easy conversation for this carefree sexual couple.

From a Leo man Libra woman marriage compatibility perspective, they would simply ignore any unpleasant situation they face. They mutually lack any negotiating skills, and as time passes, they will realize that they have very little in common.

The socially active Libra woman is active and loves being out and about doing something. The Leo man enjoys being in different social settings. He will enjoy spending time with her.

The Leo man Libra woman are both very generous individuals. They will be happy to help the other succeed at whatever they set their minds to. The Libra woman will support the Leo man in all his new endeavors.

The time the Leo man and Libra woman spend together will be a journey of discovery as they both enjoy the same things, especially having deep conversations. The Leo man Libra woman couple are able to charm each other to ensure they both get all they desire out of a relationship.

From time to time the Leo man dating Libra woman might perceive her as being critical when in fact she is being sincere. He might feel that way when she doesn’t flatter him as much as he needs her to.

The Libra woman values peace and harmony, and the Leo man’s temper will come as a surprise to her. She will either go with his ideas to keep the peace, or they will have a huge shouting match. If she decides to go along with him, it could result in a vicious circle. Which is detrimental to their relationship.

In a Leo man Libra woman relationship they will enjoy attending parties, dressing well and appreciating good things in life. The jealous streak of the Leo man could fuel his possessiveness if the Libra woman lingers longer with someone when they are out. His temper will catch her off guard, and she will not be happy.

When a Leo man wants to attract a Libra woman, he should honestly admire her intelligence. She will be able to see if he is not sincere. The Libra woman will not respond well if she feels that she is being patronized. He can ask her for some advice and then follow through to act as she recommended. He should find something to work on with her in order to hook her.

When a Libra woman wants to get the attention of a Leo man, she should be sure that he is the man she is able to be with for the rest of her life. He is a keeper, so if she plays her cards right, she will have him for life. She should avoid being too smart in their conversations, and let him be the center of attention when out with friends

The Leo man Libra woman compatibility is over when the Leo man becomes too possessive and inflexible. The Libra woman saying no to him will send him into a rage that she will never want to return to. Neither will want to give up on their romantic illusion but will have to accept defeat when it is done.