The Leo man Leo woman compatibility personalities are both powerful and intense. They will have a very sociable and ostentatious relationship, and will always be found mingling in all the right circles. This means that they will probably meet at a party and connect right away. They live for the here and now, and are always in search of the next big party, so will easily slip into each other’s social circles.

The Leo woman wants to be adored and worshipped; he welcomes the opportunity of showing her off. His nose might be out of joint when she is too busy admiring herself to pay attention to him. The relationship between the Leo man Leo woman will not always be an easy one, but when they get it right, it will be an optimistic, warm and loving one.

Their friends and family will be drawn to them. Friends are a big part of the Leo man and Leo woman’s lives. Most of their friends will be people that they have known for many years, and have a lot of shared memories with. The Leo man Leo woman in love will take their time to make sure before they commit to each other. Ending relationships is not something they are accustomed to doing, which results in them not always knowing when it’s time to call it quits.

Should they be willing to let the other be in the limelight from time to time, there will be a good balance between them which only makes a relationship stronger. Both are ruled by their heads and not their hearts, so they will have to work on the passionate side of their romance. There really is no spontaneity between them, which is not problematic, as neither of them expect it.Neither are prone to hold a grudge as both the Leo man and Leo woman are kind at heart.

The Leo man Leo woman love compatibility is exactly what everyone else sees, as their behavior is always consistent. Because they both want the same things, this relationship has the potential of either being really efficacious or resulting in a power struggle for control. The big question is can their compatibility withstand their passion, drama and public disagreements.

The Leo man Leo woman sex will be playful, and fantasy role plays will be the norm. They both have the same expectations and desires from a partner. This will result in both of them being deeply satisfied by their love making. When they get the passion right, this relationship will rock! Neither of them will ever get bored as they believe in enjoying life to the full. Romance for the Leo man and Leo woman is better than the best love story that they or anyone else, has ever seen. 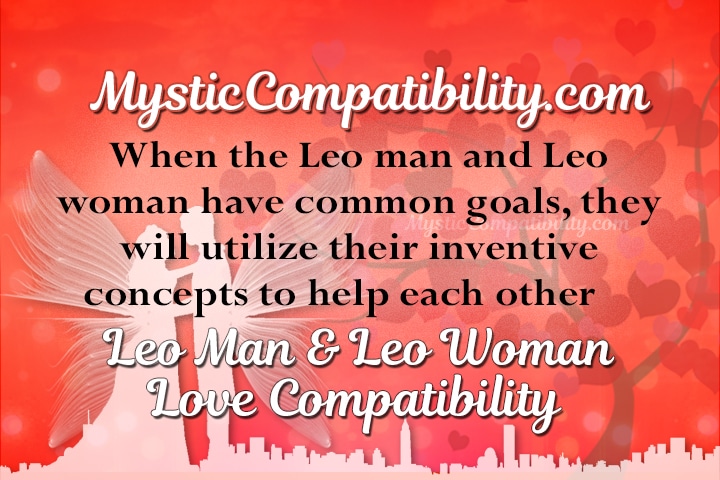 The Leo man Leo woman marriage will be successful when they succeeded in becoming reliant on each other. They are both outwardly conscious and will ensure everyone that sees them, can appreciate how contented and successful their relationship is.

The Leo man Leo woman soulmates are able to interact with positively. They tend to be very loving to their children. They have a set of ethics that older people approve of and can equate with.The possibilities for the Leo man and Leo woman are endless due to their creative personalities.

Their alike personality traits ensure that they will share the constructive habits enjoyed by both of them. The Leo man Leo woman both enjoy going out and either having fun or relishing in the finer things of life. Money is no obstacle as they both have a good financially acumen. Financial problems will not be something that they will have to deal with.

There will be a continuous stream of creative ideas from both of them that they will want to share with each other and their friends. Their own shortcomings are the only obstacles that have the potential to hold them back from having a perfect Leo man Leo woman relationship.

When the Leo man and Leo woman have common goals, they will utilize their inventive concepts to help each other, happily ensuring that they are successful in reaching their goals.When they meet a matching personality that is able to help them to relax and enjoy life, they will see the rewards due to their energy and high spirits.

They are easily able to negotiate on any decision making. This power sharing will take determination and understanding to be work successful for them. Fortunately, both the Leo man and Leo woman have the propensity to reach this point.

Both the Leo man Leo woman, always need to be right. They can be very stubborn, which will get the relationship into trouble fairly quickly. The quick-tempers that they both have, does not help the situation either, as neither will want to back down or concede in their decisions.

Their arguments can last for quite some time as neither of them is prone to be the first to apologize. Their pride prevents them from admitting when they a have made a mistake.

Jealousy and being highly possessive will result in many arguments and tempestuous disagreements. They are not afraid to let people know when they are unhappy. The couple is not really concerned about fighting in front of others. This can result in people avoiding them so as not to have to deal with them when they are arguing.

The Leo man Leo woman lovebirds, both enjoy being the center of attention. It won’t go down well when either of them tries and upstage the other. The passion that fuels their temperaments is able to bring them closer or break them apart. Theirs is no doubt a tempestuous relationship for all the see. Their arguments will be dramatic and extreme.

When a Leo man wants to attract a Leo woman, he needs to ensure that any flattery is sincere. He should communicate about something that they have in common and avoid speaking only about himself. She will be far more than he is looking for, so even though he might be ridiculously infatuated by her, he should avoid becoming over the top in his flattery.

When a Leo woman wants the attention of a Leo man, she should attempt making him feel worthy. It is essential that she is able to let down her hair and be a little exciting. When he wants to pay for dinner, she should let him.

She should always look her best when out in public, as he is always concerned about outward appearances. She needs to try not be too arrogant, but let him see her demure and ladylike side.