The confident Leo man and intriguing Scorpio woman have a magnetic attraction. His natural ease and her intrigue leads to an instant attraction.When they meet for the first time, the Leo man Scorpio woman compatibility will fill the room with power, egotism and raw sex appeal.

The Leo man Scorpio woman in love are the epitome of eroticism. Everyone one else in the room will be enamored and talking about the fireworks between them. The Leo man knows that with the Scorpio woman there are no second chances, so the courtship will have to be without fault.

They are able to have a powerful and intense relationship, which can never be classified as peaceful or boring. Their good days will be fabulous and their bad ones, stupendously bad. The strong Leo man is fearless, and the charming Scorpio woman is confident. The Leo man Scorpio woman soulmates are both tenacious which can mean passionate love or fiery trouble for them.

The in-love Leo man is unquestionably faithful to his partner, which the suspicious Scorpio woman will take some time to accept and comprehend. The Leo man might find that she tests his reactions to make sure he is for real. She will soon realize that he views her as the best entity that ever crossed his path and won’t want to do anything to jeopardize their potential relationship.

The Leo man Scorpio woman friendship is not something that will feature with this couple. The proud Leo man is going to have a hard time trying to convince the deeply emotional Scorpio woman to agree to flatter his ego. He can be very egotistical and wants a partner who will be supporting him. The Scorpio woman will not fit that profile for him. Their relationship could be over before it even has the time to start.

The Leo man and Scorpio woman relationship is definitely not without drama. The Scorpio woman can be spiteful when hurt and the autocratic Leo man’s temper will prevent her from always getting her own way. She will then try subtlety to get him to do things her way. When he realizes her manipulating manner, he will be fuming.

The Leo man Scorpio woman couple will need to find a good balance between them, with her letting go of her natural dominant personality and he will have to let her take the lead sometimes. She is very capable and wants to have the opportunity of showing him just how well she can manage things.

The Leo man Scorpio woman love compatibility is a match of equals, which neither of them will handle very successfully. The Leo man and Scorpio woman are both emotionally similar, and neither of them wants to be the first one to apologize when they have arguments. Their tempestuous relationship will keep their connection interesting and alive, but can also burn them if they stay together too long after it’s over.

Romance will be seen, as never seen before when the Leo man dating Scorpio woman pulls out all the stops to let her know of his love for her. He will utilize every bit of his know-how to pursue her during their courtship. If they are able to learn how to give and take they will have a very successful and happy relationship.

The Leo man Scorpio woman sexuality and passion is all about sentiment, body, and desire. The intertwining of their hearts will be a force to be reckoned with. The passionate Scorpio woman is lustful, and the intense Leo man will match her every desire. They both have roaring tempers that will fuel their passion, and make up sex will be uncontrolled and intense. 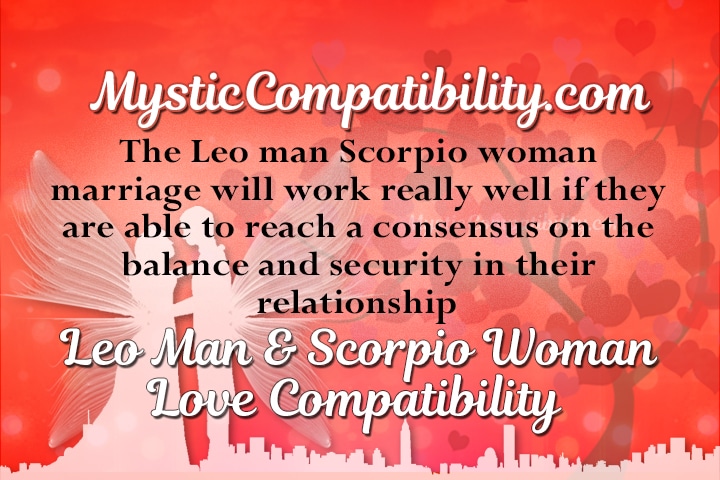 Sexually the Leo man and Scorpio woman are highly compatible. They have a huge amount of chemistry which results in abundant passion and tenderness between them. The Leo man Scorpio woman sex will unveil a partner that they have both always been looking for.

The Leo man Scorpio woman marriage will work really well if they are able to reach a consensus on the balance and security in their relationship. They both believe in true love being the only reason to get married. Once they commit to each other, neither by nature are likely to be unfaithful.

To stray would be undignified and a lack of self-control. They are both successful in their careers so will have a very comfortable lifestyle. Their children will have very loving parents, who are able to provide abundantly for them.

The Scorpio woman commands attention, and the Leo man demands it. As long as he can see reciprocation from his friends and family, he will always be plentiful with his affections.

Straight away she will realize that he is certainly not shy about saying what he wants. He will be stumped by her as she is deeply mysterious, which makes him even more impatient to get to know her.

The Scorpio woman may come across as passive, but she has an energy that will drive the Leo man crazy. He has found a partner that is the epitome of desire.

The Leo man Scorpio woman relationship is co-joined in fidelity and loyalty, which goes a long way when they have arguments and need to resolve their issues.

The Leo man Scorpio woman see the world through very different emotional personalities. The Leo man is all about love and laughter, and the Scorpio woman has been to some dark places that he could never imagine.

There will be a struggle when she wants him to explore deep emotions and survive her volatile moods. He, in turn, will feel it’s just too much emotion for him to deal with.

The ferocious temper of the Leo man has met his match with the lash of the Scorpio woman’s tongue. Their stubbornness will result in unresolved issues that will bring about cracks in their relationship.

When a Leo man wants to get the attention of a Scorpio woman, he will have to mean business when he tries to impress her. This is a woman that has been hurt too many times, and if she is going to take a chance on the Leo man, the emotional risk will have to be the same for both of them.

He needs to listen when she speaks, and not gloss over anything. He’ll have to pay attention to avoid being stung for not paying attention.

When a Scorpio woman wants to attract a Leo man, she should not be subtle in her interest. The Leo man is without deception, and he loves the idea and actions of being in love, so she can relax and enjoy some of the fun courtship experiences. She does not have to hold back on her sexual pleasures; he will be happy to accept anything she throws at him.

The relationship is over when there has been misunderstanding in the level of commitment between them. The Leo man Scorpio woman compatibility intimate connection and memories that they shared will make this an intense and agonizing breakup. The Scorpio woman can be hostile and vindictive, while the Leo man will walk away in despair.