The Leo man Pisces woman compatibility pair are drawn together by their mutual romantic natures. He is confident and will take the first step to meet her. She is demure and will be standing alone and watching the room. The Leo man loves being the center of attention, and that is exactly where she will spot him.

The Leo man Pisces woman soulmates are both idealistic and sense that they have found a partner that is trustworthy. The gentle Pisces woman is easily hurt, and the protective instincts of the Leo man come to the fore very easily.

His protective nature will respond in wanting to take care of her. He senses that his need for devotion will be fulfilled by the loving personality of the Pisces woman.

There will be an abundance of sentimentality and romantic gestures between them. The Pisces woman will concede to all that the Leo man brings to the table. He loves taking the lead, and she will happily sit back and let him. This will work for a while until the Leo man is bored and the Pisces woman starts to feel unsatisfied.

The fiery temper that the Leo man has can hurt the Pisces woman. This will damage her sensitivity, and she will be totally despondent. When she becomes emotionally distraught, he will find it difficult to console her.

His normally optimistic and enthusiastic personality will take the strain, and he too can become miserable and depressed. This Leo man Pisces woman couple is smart enough though to be able to resolve any disagreements before it results in permanent damage.

They are able to have a fabulous Leo man and Pisces woman relationship when they bring together the Pisces woman’s compassion and imagination and the creative and generous spirit of the Leo man. Outsiders will look on at them and wonder what keeps them together, but his vision and her spirituality will bind them into a truly unique relationship.

The Leo man Pisces woman friendship has a sense of innocence about it. What especially bonds them is their ability to speak about every day experiences in a whimsical way that makes it seem appealing and exciting. They will take their relationship seriously and at all costs will work to keep their compatibility alive and working well.

When out with friends, it is the Leo man dating Pisces woman that is in total control. Unbeknownst to anyone else, it is the respectful Pisces woman’s insight that is influencing him. His need for social acceptance will lead him to want to show her off to his friends.

As she prefers to be spending time at home, she will struggle with the frantic social life that he enjoys. They will have to learn to communicate about unresolved issues if they want their relationship to be successful.

Leo man Pisces woman compatibility initially seems to be great for both of them. It is not superficial but has a deeper meaning to them, as they have many areas of unspoken understanding between them. The Leo man and Pisces woman are comfortable to compromise to ensure their relationship is successful.

The passion between the Leo man and Pisces woman is heightened by each other. When she shows appreciation for his eagerness, it will fuel his fire. She will come to realize that the desire he presents to her, is real and not only to impress her. The Leo man will have to be a bit thoughtful to the sensitive Pisces and utilize more sensual techniques with her. She, in turn, will need to step up to match his vigorous nature. 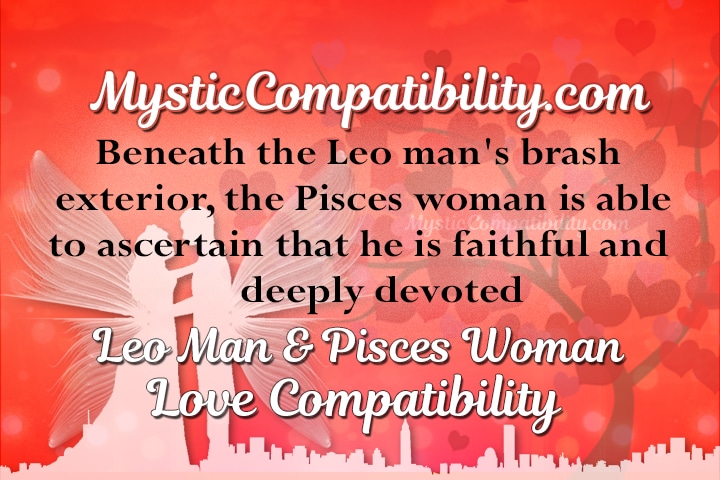 The Pisces woman is able to understand exactly what the Leo man needs and will slip into the role that ensures total fulfillment. He will feel secure and contented in their relationship when he sees the passion that he is able to muster in her.

Marriage for the Leo man and Pisces woman might be the end of them. From a romance perspective, they are all in, but when reality strikes it could destroy all that they built together.

The intuitive nature of the Pisces woman, realizes straight away that the Leo man wants to charm her. She, in turn, will be very attentive to him, which is exactly what he desires most. The Leo man will treat her very lovingly.

If the Leo man Pisces woman lovebirds are willing to compromise they will be able to be a great support for each other. The Leo man will want to be in total control of the path their relationship takes. The Pisces woman will be relieved that he is handling all their responsibilities and she will bring his ideas to higher plains.

He is confident to make the first move, and his protective nature will help her feel secure within their relationship.

The Leo man’s passion can sometimes be overwhelming, and the delicate Pisces woman will simply be lost in the moment. She prefers things to be simple, and he wants to shower her with romance lavishly.

They seem to want completely different things, which could become problematic in the bedroom. The sensual Leo man might look elsewhere if he does not receive satisfaction at home.

When the Leo man and the Pisces woman disagree on fundamental things, it will cause fiery arguments between them. She is passive and will not continue to endure his fiery anger whenever he cannot get his own way.

When a Leo man wants to get the attention of a Pisces woman, he definitely needs to arrive on time to fetch her for their date. He should ensure that he is well dressed and that the evening ahead has been planned to fruition.

When a Pisces woman wants to attract a Leo man, she should keep in mind that he loves the traditions of courtship. She should gracefully accept all his potentially unusual steps to get a relationship started. Seemingly being a bit aloof will make him want to capture her and make an honest woman out of her.

The Leo man Pisces woman compatibility relationship is over when the communication between them has broken down, and they find it hard to continue being honest with each other. Honesty brings conflict and fights. They will both are hurt and take some time to heal.