The Leo man and Sagittarius woman soulmates are kindred spirits. In a Leo man Sagittarius woman compatibility they both tend to look on the bright side of bad situations. Optimism and thrill seeking is mutually shared between them.

The problems arise when the busy Sagittarius woman is doing her own thing and doesn’t give the Leo man the time he needs to be adored and revered by her. He will become sulky and annoyed when he feels she isn’t giving him enough devotion; she will find his reaction melodramatic.

Initial dates between the Leo man Sagittarius woman will be filled with laughter, fun and exciting actions. There will be a lot of joy and playful vigor between them.

The Sagittarius woman is outgoing and full of adventure and will want her partner to join her. When she realizes that the staid Leo man would prefer her to be at home getting the dinner ready and the children bathed, she won’t be pleased.

A good Leo man Sagittarius woman friendship would arise, but the Leo man will go in heart and soul, and the Sagittarius woman’s loyalties lie elsewhere. She is happy just to be friends that can get up to all sorts of mischief, but the loyal Leo man, on the other hand, will want more.

He will want to go the traditional dating route. Everything will be mapped out as to when and where they will be seeing each other for date nights. She will view his predictability as boring and pretentious.

The Sagittarius woman doesn’t respond well when she is given an ultimatum, and the Leo man finds its frustrating when someone cannot make decisions timeously.

She will find his demands suffocating and her refusal to compromise to his wishes will result in his raging temper coming to the fore. Once this happens, she will reason that he is not the partner for life she hoped he would be.

Sadly the potentially unfaithful Sagittarius woman will deeply hurt the faithful Leo man’s pride if she ever strays. She has a desire for freedom, and he will struggle with her restlessness. The Leo man will need to learn that he is not always able to win with her. He also understands that she is the controlling personality in their relationship.

Fortunately for the Leo man dating Sagittarius woman, she is willing to adapt but won’t compromise her free spirit. She will happily meet him half way. They have a mutual respect for each other and a generous spirit that can result in an exciting and mutually beneficial relationship.

For the Leo man Sagittarius woman love compatibility to work successfully, they will have to re-think their outlooks. The Sagittarius woman is not spiteful so any arguments they have, albeit dramatic and fiery, will be quickly forgiven and forgotten.

Neither of them is resentful and will move on to other things in record time. The Leo man will love the Sagittarius woman to the extreme in that he will be willing to walk away from his creature comforts to make her happy. He might just have to if he wants the relationship to last a lifetime.

The romance between the Leo man Sagittarius woman in love will not be enough for the Leo man. She doesn’t really take romance very seriously, and he might find her laughing at some of his antics. He will simply stop trying when he realizes it is wasted on her. They both have the best of intentions toward each other and will deal honestly and open with all they are in contract with. 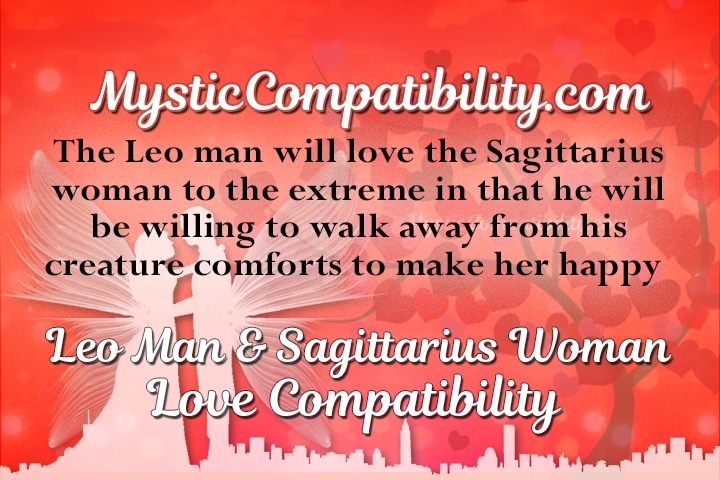 Passion for the Sagittarius woman is reserved for humanitarian projects, the philosophies of life. The Leo man is very passionate and will become frustrated with her lack of excitement. Their zest for life will result in them finding ways to please each other, and they have the ability to become unbridled lovers.

A Leo man Sagittarius woman marriage could be disastrous first time round. A second marriage where the Leo man does not carry his heart on his sleeve could be a much better option.

The Leo man Sagittarius woman couple share a wonderful energy. She is always on the lookout for adventure, and he is looking for the next challenge to grab his attention. She is flirty and he at the center of the crowd, and will catch her attention right away. When they start a conversation, they will discover that they have a lot in common.

Intellectually the Sagittarius woman is a good match for the Leo man; she enjoys his ability to keep up with her witty banter. Their enthusiastic outlook to life will draw them to each other.

Should the Leo man give the Sagittarius woman the freedom she wants, she will want him to join her on her adventures. His excitement for new ventures ensures that he will happily join her. If they are able to journey together, they will have a good and lasting relationship.

The Leo man and Sagittarius woman lovebirds will find that arrogance will get in the way of their lives. He will want her to focus on him at times, and she won’t have the energy to bother with complimenting his ego. He wants devotion from her, and she is out to have a good time.

The flighty nature of the Sagittarius woman becomes more evident as the relationship progresses and she will have sight of his dominant personality when he tries to tie her down. The Leo man takes pride in taking care of all his responsibilities. He expects his partner to do the same. The Sagittarius woman doesn’t see the need for and finds responsibilities, distasteful.

When the Leo man wants to attract a Sagittarius woman, he should keep his conversations positive. He can complement her friends and when out to dinner respectfully deal with the waitrons. The Leo man should smile and laugh and show her, his fun side. He can take the time to get to know her parents.

When the Sagittarius woman wants to get the attention of a Leo man, she should be honest and open. He loves to have his ego stroked, so she can sincerely compliment him. She can try and take him seriously and be attentive to his conversations, no matter how boring.

The Leo man Sagittarius woman compatibility relationship is over when the numerous miscommunications between them result in too many arguments. The arguments are about him trying to control her. Also, her trying to have more freedom than he is comfortable to award her. She will roll her eyes and find his response to their Leo man Sagittarius woman break up, melodramatic. She will move on with her life as if he was never in it.