Leo woman Pisces man compatibility lovers are one of the worst matches imaginable among the zodiac signs. They have a distinct lack of trust, and there is next to no emotional connection between the two. It is rare that they will have feelings for each other in the first place, as they both struggle with their views on one another.

The Leo woman bears a striking resemblance to her zodiac animal, the lion. This is because she has an incredible sense of pride, and she is a naturally born leader. She has an extreme desire to appear in a positive light to everybody who meets her. If the Leo woman feels disliked, then she will become incredibly withdrawn and defensive. She puts on a front to maintain a good public appearance, and endeavors to make herself an appealing person to spend time with.

This is not hard, however, as she had a bright personality. She has a particular zest for life which makes her a magnet for other people. Life is never dull for a Leo woman, as she will always do her best to have an adventure every single day. She is bright, bubbly and fun, which makes her enjoyable to spend time. Leadership is also a talent of the Leo woman as she has the passion and drive that enables her to be a strong leader. Passion is one thing she possesses in abundant quantities.

One notable feature of the Leo woman is her inflated ego. She has a need for constant validation that cannot be replicated by any other zodiac sign. Compliments and words of affirmation are important to keep the Leo woman feeling happy and loved. She may value her own needs and opinions over other people’s, which could make her appear to others as a selfish person.

The Leo woman is no stranger to spending lots of money to have the most luxurious possessions possible. Big price tags mean quality, and she always wants the best of the best. Whether its clothes, objects or experiences, she is always prepared to invest in expensive things. She sees these things as medals of honor, and they further encourage her egotistical ways.

When it comes to Leo woman Pisces man relationship, she will usually have one of two reactions. If she is not receiving adequate attention and excitement from her partner, she will feel unloved, and won’t stick around. The other possibility is total satisfaction. She will feel relaxed and comfortable with her spouse and have an incredibly passionate bond with him. Overall, she is a very loving and dedicated partner, and their life together will be full of excitement.

A Pisces man is trapped in a dream-world and hates the gritty truth that is the reality. He hates the ideas and pressures that society has, and enforces upon people. For the Pisces man, he would much prefer to live in his head and construct an idealized version of reality for himself. His version of reality tends to be very fairy-tale like, and usually has some relationship with his spiritual connections.

He is truly spiritually led and may do many things to come to “enlightenment,” and to enrich himself. Spirituality is important to him, and he likes to connect with his inner self. Pisces men tend to adopt some religion to fulfill this desire.

On many occasions, Pisces men have been known to turn to drug and alcohol addiction. This is because the Pisces man has a deep need to connect with his spiritual self and it is also a way to escape the brutal reality he hates so much.

Another main quality known to be possessed by the Pisces man is a high level of emotion. He is possibly the most emotional zodiac sign, and he needs a woman who can ground him and allow him to share these feelings without judgment. The Pisces man needs to have room to express his feelings and carry out his romantic fantasies. He is a hopeless romantic, and he can sometimes become wrapped up in his daydreams about a fantasy relationship.

On most occasions, the Leo woman Pisces man dating are matched horrifically. They do not have much in common, and they will more often than not, find each other unbearable. They have too many personality differences to function as a happy couple. 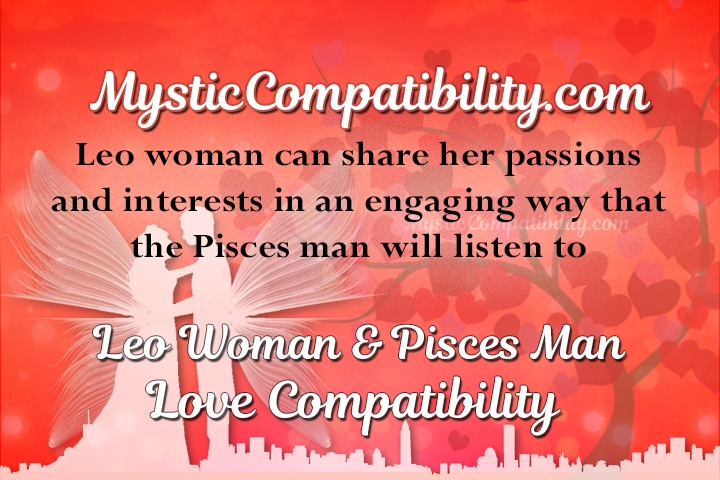 However, in all honesty, this is essentially the only pro to this Leo woman Pisces man relationship. The two are not well matched at all, and as disappointing as this is, they will both be much happier with other signs.

When it comes to a Leo woman Pisces man sexual relationship, things do not seem good. The Leo woman is intimidating and far too forward for the Pisces man, and this will make him more reserved and uncomfortable. On the other hand, the Pisces man is too timid and careful, and he will rarely give the Leo woman the attention she desires. Leo woman Pisces man sex will not be particularly enjoyable, as neither can be truly satisfied by one another. They cannot offer each other pleasure to the fullest extent, as they have very different preferences, and they are not particularly attracted to each other. The pair will be intimidated by each other, and this prevents them from having a positive sexual experience that is enjoyable for both of them.

Pisces men tend to be incredibly passive, and they will not often fight for their relationships. A Leo woman, however, is extremely passionate, and she will do everything in her power to maintain a successful and healthy relationship.

In the Leo woman Pisces man love compatibility, couple, they will struggle to hold onto their initial spark, as the Pisces man will let it extinguish without much of care in the world. Their values are different throughout most aspects of life, and they will both suffer in the long run. A relationship should be happy and healthy, but the Leo woman Pisces man love match will be neither of these things due to their lack of trust and emotional connection. The pair could also struggle to find anything in common at all, because of their strongly contrasting personalities.

Overall, Leo woman Pisces man compatibility affair this is not a match made in heaven. The Pisces man needs his fairy-tale princess, while the Leo woman likes to be the knight in shining armor. There are too many differences between this pair to have a fruitful and meaningful relationship. This is sad but true, and both signs are better off looking elsewhere for their soulmates.