The Leo woman Taurus man compatibility affair does not usually prove themselves to be very compatible. They have a distinct difference in nature that completely defies the idea of “opposites attract.” This two could end up irritating each other and causing each other a lot of misery in most situations.

The Leo woman is known for her inflated ego and high opinion of herself. She may sometimes appear to only care about her thoughts and well being, but this is not the case. Flattery and compliments can influence her easily, and she may become slightly self-orientated. This doesn’t mean that she isn’t able to appreciate other people, nor that she sees herself as above them. She may just develop a high opinion of herself, and this does not have to be a bad thing.

Adventure and challenge are close to her heart, and she strives to make her life as fun as possible. She always needs to be on the move, embarking on new journeys and enriching experiences. Nothing is boring when you’re with the Leo woman, and she will always ensure that her friends are having a great time too. She holds her pride close to her heart and likes to be dominant. Along with her ego comes her pride, which is quite fragile. Her outward appearance and how the public sees her is everything, and she endeavors to make her impressions good.

When it comes to Leo woman Taurus man relationship, the Leo woman is not always very reliable. She may tend to chase partner after partner, always preferring the thrill of the chase over a substantial relationship. However, when she has committed to a man, she is incredibly loving and adoring. She will devote her time and attention to him, and make the entire relationship a fun experiences.

Living the high life is another trait of the Leo woman. She loves all things expensive and is no stranger to spending a lot of money on things she sees as high quality. Whether its clothes, items, or experiences, she will always choose the most expensive thing to have a higher quality of life. Her partner will also be on the receiving end of this, and she will shower him with gifts.

The Taurus man is usually known for his old-fashioned ways and incredibly maturity. He is the “grown-up” of the zodiac signs, and he presents this in many ways. The Taurus man’s main values are stability and sensibility. He dreams of a stable home, stable relationship, a well-built house, and stable life. Excitement comes to the Taurus man via a new plant pot, or a desk from Ikea, rather than an adventurous endeavor.

He is definitely for the more old-fashioned woman, as he likes to be the man of the house and provide his partner with plenty of stability. Sensible is the main word that most people would use to describe the Taurus man. He is cautious and careful, fearing the day that his expensive stable home gets turned upside down. Change is terrifying to the Taurus man, and he needs somebody who will stay by his side forever.

He is looking for a wife, somebody who can be there for him, somebody to have his children. Drifters are not welcome, and he is usually attracted to very steadfast women. He is practical and may seem boring to those who prefer a more fast-paced lifestyle.

Staying at home is not unusual for him, as he would much prefer a night in front of the TV with his family to going out and getting drunk for “fun.” He can also be pretty stubborn, but this is only further proof of his stability. The Leo woman Taurus man in love have their cons, but they also have plenty of pros. The only ones who can determine whether this relationship works, are the people within it. Despite the cons, the Leo woman Taurus man couple could make each other very happy, so it’s always worth a shot.

The Leo woman Taurus man horoscope signs surely have the strongest prospect for a healthy sex life when both have already developed their own sexual identities. They will know exactly what they want and need from a sexual relationship, and neither will have any problems with voicing those requirements. The Leo woman will be confident and passionate, bringing an energy to their sex life, while the Taurus man will bring the sensitivity and emotion needed to have a good Leo woman Taurus man sexual experience. These signs both have very fixed and stubborn natures, which can be a perfect thing for this pair.

Leo woman Taurus man can stand on their feet when it comes to honesty and telling the truth. Neither feels afraid to give their honest opinion, so they are able, to tell the truth, and stand by it. Lies jeopardize relationships, and that is something that this pair understand. Neither will feel the need to put their Leo woman Taurus man love in danger with small lies, and they can both reveal their deepest secrets to each other. 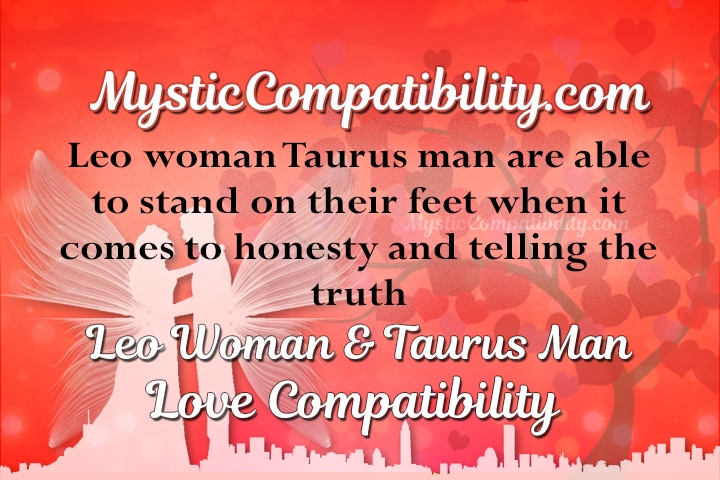 This couple may struggle because of their mutual need to be the one to be taken care of, especially when it comes to sex. Leo woman Taurus man soulmates enjoy lying down and having their sexual needs fulfilled. But rarely will one of these be happy to be on the giving end. It is not a case of not wanting to, but they would both much prefer to be on the bottom and do as minimal work as possible. Despite their love for each other, the Leo woman Taurus man love compatibility partners could get into many arguments about their lack of a sexual zing. They will struggle to find the motivation to get going, and then struggle to agree on who’s turn it is to do the hard work. The Leo woman Taurus man lovers have a desire to be taken care of sexually.

Another problem arises for these two when it comes to communication. Both signs are stubborn and will stand their grounds throughout most arguments. The Leo woman holds her ego most dear, and the Taurus man holds his pride. If these Leo woman Taurus man sun signs get into an argument, they may struggle to reconcile, as they will both view their own opinions as the correct ones. These signs have strong senses of pride, so they will not allow themselves to be wrong very often. No matter how petty the argument, Leo woman Taurus man dating will struggle to overcome this boundary, because of their fixed opinion.

This could also translate when it comes to trust. If neither sign is willing to change and adapt to improve the relationship. Thus, there will be a distinct lack of trust. This could potentially ruin the Leo woman Taurus man love match. So both of these signs need to be aware of their stubborn natures. Opening themselves up to criticism and other people’s opinions will give this pair more room to grow together and build a better relationship.

This connection could also have a lot of trouble when it comes to emotions. The Taurus man is highly emotional and seeks a partner for life. The Leo woman is more passion-orientated, and true love does not matter to her. They could become stuck in their bubbles, and this will prevent them from developing an emotional connection with each other, which is obviously necessary for a healthy relationship.

In the Leo woman Taurus man marriage, they also have very different values, driving them further apart. The Taurus man sees stability and security as the most important thing in the world, while the Leo woman constantly wants to be on the move and living a life of luxury. If a couple has similar mutual goals, it will give them something to work towards together and provide an opportunity to grow together. Without this, they may end up at a dead end, and struggle to find a future together.

Overall, there is a strong chance that this Leo woman Taurus man compatibility will not work out as desired. The Taurus man Leo woman lovebirds do not complement each other well and tend to bring out the worst in each other. This lion versus bull relationship will only end in misery and annoyance with each other. As far as matches go, this one is not advisable.